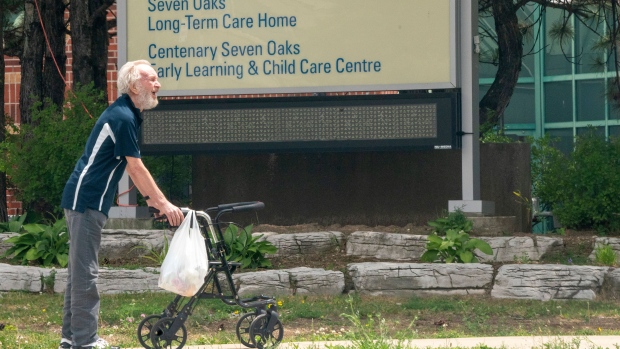 OTTAWA — Residents should feel at home, respected, and safe in long-term care but the current reality doesn’t come close, says a survey that will inform new national standards of care.

The survey was conducted by the National Institute on Aging on behalf of the Health Standards Organization. It will shape the national standards that are being refreshed at the behest of the federal government.

Of the survey’s 16,093 responses, 67.3 per cent did not feel that long-term care homes in Canada provide safe, reliable, and high-quality care.

That number was higher, 75.7 per cent, for people who self-identified as family members, friends or unpaid caregivers to a resident in long-term care.

Many long-term care homes were already struggling to provide basic care to residents when the COVID-19 pandemic struck Canada.

The virus had a devastating effect on the already troubled system.

About 69 per cent of Canada’s total number of COVID-19 deaths happened in long-term care as of February 2021, according to the Canadian Institute for Health Information.

Work has already begun to refresh current national standards for long-term care, the first draft of which is set to be released to the public early next year.

“An overwhelming majority of survey respondents took this opportunity to reiterate that ensuring the provision of high-quality care was the most important issue to address within LTC,” said the report, prepared by the National Institute on Aging research fellow Ashley Flanagan.

In fact, they found that to be the bare minimum requirement.

Survey respondents also want a focus on resident quality of life that encompasses everything from the design of the buildings to the food served and community culture fostered by staff.

Respondents called for private, comfortable spaces and an open-door policy for visiting with friends and family.

The survey also touched on the health, safety and job security of workers in long-term care homes. That means providing equitable wages, benefits, pension, paid time off, and explicit attention to staff well-being.

People who answered the survey said they wanted to see the development of an independent regulatory body to ensure consistency of care across the country to make sure new standards work.

The results of the survey will be incorporated into the new long-term standards. After further public consultation, the technical committee will replace the old ones next year.

Approximately 99 per cent of respondents felt that long-term care homes should be required to meet the new standards once they’re finalized, though many added the caveat that the implementation must be accompanies by enforcement.

Right now, some provinces require homes to meet Health Standards Organization benchmarks as a condition of their accreditation, but not all.

The Canadian Standards Organization is also developing long-term care standards that will focus on infection protection and control in long-term care, including ventilation, plumbing, medical gas systems, and the use of technology.

The federal Liberals promised to legislate safety in long-term care as part of the party’s re-election campaign, but it’s unclear if the proposed law would make the standards mandatory.

If so, it would have to be negotiated with provinces and territories, as long-term care is not federal jurisdiction.

This report by The Canadian Press was first published Oct. 11, 2021.