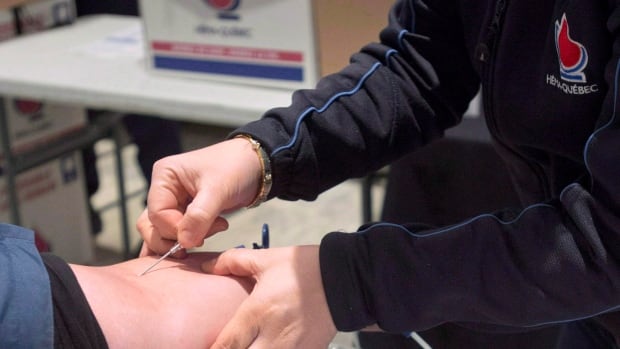 With COVID-19 causing a drop in blood donations, the NDP is renewing its push to end what it calls a “homophobic” policy that bans any man from donating blood if he’s had sex with another man in the previous three months.

NDP MP Randall Garrison tabled a motion to end the ban exactly six years ago. Today, he will table a similar motion, arguing that the pandemic has made expanding the donor pool more important than ever.

“We could make about five per cent, at least, more of the population eligible to donate at a time of great blood shortages,” he said.

“And when we’re trying to do research on COVID-19 and we need plasma donors who’ve recovered from COVID-19 — that is a very small category. To exclude anyone from that category during the crisis is a big mistake.”

It is not a good feeling to be told that somehow your blood is not valuable …– Michael Bach, Canadian Centre for Diversity and Inclusion

In 2015, the Liberals made an election campaign promise to end what they called the “discriminatory” ban on blood donations.

Since then, the government has reduced the blood donation waiting period for sexually active gay or bisexual men, or any other men who have had sex with men — first to one year, then to three months last year.

Garrison said the waiting period, and the ban itself, have no basis in science.

“Those are meaningless. When you talk about normal human sexual behaviour, saying someone has to be celibate for five years, one year, three months … those are all pretty much the same,” he said.

Catherine Lewis, a spokesperson for Canadian Blood Services, said 15 research projects funded by Health Canada are underway in partnership with Héma-Québec, a non-profit that supplies Quebec hospitals with blood products. The research projects are studying potential changes to donor eligibility rules and alternative screening approaches for blood and plasma donors.

No timeline for ending the ban

“We recognize that being turned away from donating blood can leave a donor feeling hurt and rejected, especially because blood donation is a purely altruistic gift,” Lewis said. “And this can be compounded when we’re engaging with a group that has experienced longstanding marginalization and stigma related to their sexuality.

Lewis said she could not predict when any changes to donor eligibility rules might be introduced.

Michael Bach, CEO of the Canadian Centre for Diversity and Inclusion, said he understands the need to exercise caution. But five years on from the Liberal election promise, he said, it seems that progress has slowed to a “snail’s pace.”

Bach, who is in a same-sex marriage, said it offends him that he’s barred from giving blood while someone who may engage in high-risk behaviour is not.

He believes donor eligibility should be based on behaviour, not sexual orientation.

“It is not a good feeling to be told that somehow your blood is not valuable, even though Canadian Blood Services and Héma-Québec will tell you that they don’t have enough blood in the system and they’re desperate for donations,” he said.

Canadian Blood Services said it’s committed to being as “minimally restrictive” as possible while maintaining the safety of the blood supply. Any policy changes, it said, must be accepted by patient groups and approved by Health Canada.

In the early 1980s, about 2,000 Canadians were infected with HIV from tainted blood products. Thousands more were infected with hepatitis C. Although AIDS was first reported in Canada on March 27, 1982, it took three years for the Canadian Red Cross Society, which managed the nation’s blood donation system at the time, to start screening for HIV.

A donor eligibility rule was introduced that excluded any man who’d had sex with a man — even once — from donating blood. The policy was embedded in Health Canada regulations in 1992.

Cole Davidson, spokesperson for Health Minister Patty Hajdu, said Canada now has one of the safest blood systems in the world.

“Working with Canadian Blood Services and Héma Quebec, we have been able to reduce the deferral period for donation to three months for men who have sex with men,” he said.

“The finish line is within sight, and we’ll keep working with Canadian Blood Services and Héma Quebec until we cross it.”