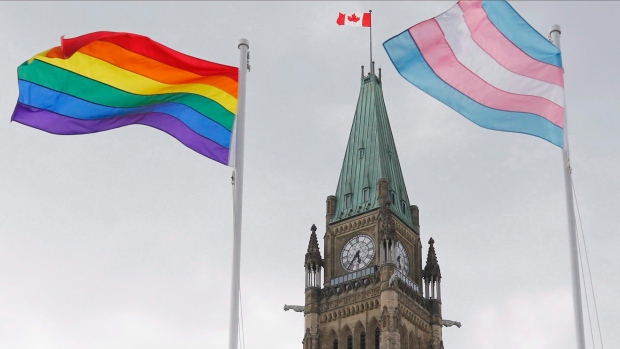 OTTAWA — An NDP MP is reviving his years-long call for the federal government to move to end the blood donation ban for gay men as well as some other folks in the LGBTQ community, citing the critical need for both blood and plasma amid the ongoing COVID-19 pandemic.

June 5 marks the six year anniversary of B.C. MP Randall Garrison first calling on the federal government to take immediate measures to end the policies around blood and organ donation and to replace the rules with a science-based policy that “protects the integrity of the Canadian blood supply while treating all potential donors with equal dignity and respect.”

Now, with Health Canada and Hema-Quebec seeking blood donations given a shortage due to the pandemic as well as seeking out plasma donations from recovered COVID-19 patients for critical research and possible treatments, Garrison says the health organizations are missing out on donations “for no reason founded in science.”

As CTV Montreal has reported, willing donors who have had the novel coronavirus and now want to help with studies into possible cures, have been turned away.

Antibodies from people who have already had the virus, found in their plasma, could help in treating new patients who are severely ill and offer new serological insights.

As the policies stand, gay and bisexual men who have sex with men, as well as trans women, have to wait three months after having sex with a man before being able to donate. The ban begun in 1992 as an outright prohibition following the tainted blood scandal that played out between the 1980s and 1990s and saw thousands of Canadians infected with HIV after receiving donor blood.

The three month time frame for blood donations came into effect in June 2019 after Health Canada approved a request from the Canadian Blood Services and Hema-Quebec to reduce the blood donation ban on men who have sex with men from one year to three months.

Though, having to wait three months before donating is viewed by some advocates as discriminatory.

“The interim changes have no science behind them,” Garrison said. “I’d like to see it lifted.”

“Six years ago, they gave me a lot of things that they said had to happen before it could be lifted… All those things have happened,” Garrison said, citing the need for more research and needing to draft criteria for donating. The Liberals funded the research during their last mandate and it was set to be completed last fall, with the new guidelines set to be presented to the government in early 2020.

“So I believe they’re out of excuses,” he said, adding that more than a dozen other countries currently have no deferral period for donations from men who have sex with men.

In April, the United States lowered the disqualifying period for donations from gay men and other groups to three months in an effort to make up for a decline in donations due to the coronavirus outbreak.

As The Associated Press reported at the time, the Food and Drug Administration’s previous rules prohibited donations from men who have had sex with men as well as women who’ve had sex with gay or bisexual men in the previous year.

When they were appointed by Prime Minister Justin Trudeau after the 2019 federal election, Diversity and Inclusion and Youth Minister Bardish Chagger and Health Minister Patty Hajdu were mandated to work with Canadian Blood Services and Héma-Québec, to “implement a behaviour-based model of donation that eliminates the blood ban.”

He’ll be calling on his colleagues to back his call for the government to lift the restrictions.

In the meantime, Garrison is asking the family and friends of gay men and trans women to step up and donate in the place of those who can’t.

“When it comes to blood donations, we really should all be in this together,” he said during a recent special all-party COVID-19 committee meeting.