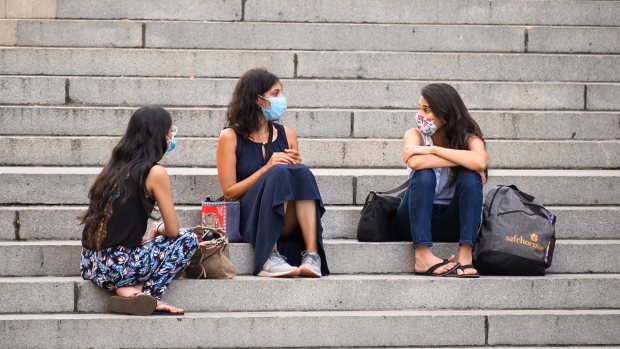 Another 134,000 people could die in the U.S. from COVID-19 by December if no further safety measures are mandated — and the actual number probably would be much worse if mandates are relaxed, researchers say.

The projection by the University of Washington’s Institute for Health Metrics and Evaluation comes with a silver lining: About 70,000 of those lives would be saved if many more Americans wore masks, the institute’s leader said.

“It really depends on what our leaders do, (both) as individuals, and what governments do,” the IHME’s chief, Dr. Chris Murray, told CNN’s Anderson Cooper on Friday night.

At least 176,000 people have died of COVID-19 in the U.S. since the pandemic began, and more than 5.6 million have been infected, according to data from Johns Hopkins University.

IHME projected that if nothing about the nation’s approach to prevention changed, death rates would dip in September but rise later in the fall, and the total would reach about 310,000 by December 1.

But changes in behavior would affect the projection, he said:

The country’s seven-day average for daily coronavirus deaths was 987 on Friday — the first time in more than three weeks that it dipped below 1,000, according to Johns Hopkins University data.

U.S. Centers for Disease Control and Prevention Director Dr. Robert Redfield said earlier this week he expects deaths to begin declining by next week as a result of continued mitigation measures.

The CDC director expressed concern that while parts of the country are reporting improvement in new cases, states in middle America like Nebraska and Oklahoma seem to be “stuck” and cases aren’t falling.

“We don’t need to have a third wave in the heartland right now,” Redfield said Thursday. “We need to prevent that.”

Getting safety measures in place now is crucial, Murray said, before fall rolls around, when health officials have predicted the U.S. will see a resurgence of coronavirus cases on top of flu season. Redfield has previously said this fall and winter are likely to be one of the “most difficult times” in American public health.

On Friday, the top health official for Seattle and King County in Washington warned the state was seeing an increased number of cases linked to social gatherings.

“We expect COVID-19 to get worse in the fall and winter and people to spend more time indoors,” said health officer Dr. Jeffrey Duchin.

To help prevent widespread infections, Murray said governors need to put mask mandates in place — mandates “with teeth” — that would allow local authorities to fine residents without a face covering.

“It will take a concerted effort but the impact is extraordinary, it’s really quite extraordinary what it could achieve,” Murray said.

In Florida, a 6-year-old girl became the youngest person in the state to die from coronavirus complications. Health officials say they still don’t know if the child contracted the virus from a known case or if this was travel related.

The report of her death comes just weeks after 9-year-old Kimora “Kimmie” Lynum, who had no known underlying health conditions, died from coronavirus complications in Florida.

Florida has reported more than 593,000 infections since the start of the pandemic, second only to California, which has recorded 660,000 positive results.

The girl’s death comes as schools across the U.S. have begun reopening. Some have adjusted plans after hundreds of students and staff were asked to quarantine in response to coronavirus cases.

A Florida judge is expected to rule next week on whether schools should reopen with in-person classes. That stems from a lawsuit filed by a Florida teacher’s union, which wants to stop the state from requiring schools to reopen for in-person instruction five days a week.

Meanwhile, more than two dozen cases of the virus across three states are now being linked back to the Sturgis Motorcycle Rally, an annual gathering that usually draws in about half a million people.

Minnesota reported 15 cases of the virus among people who attended the rally in South Dakota earlier this month, said Kris Ehresmann, infectious disease director at the Minnesota Department of Health.

Among those cases, one person was hospitalized. Officials say they expect more cases over the next few days.

In Nebraska’s Panhandle region, at least seven cases were tied to the rally, according to Kim Engel, director of the Panhandle Public Health District.

UNIVERSITIES CONTINUE TO STRUGGLE WITH REOPENING

Across the country, students are making their way back to college campuses. Despite safety measures in place, universities in at least 15 states have reported coronavirus cases, many of which trace to gatherings or athletics. Many institutions have already announced they’ll begin the semester remotely.

In Florida, university officials are already identifying COVID-19 cases as students move into dorms, according to data from Florida universities.

On Friday the University of Miami reported four students in its Hecht Residential College had tested positive for COVID-19, officials said on the university’s COVID-19 website. Those students, and several others “who have shown symptoms,” were immediately removed from their floors and are in isolation, officials said.

Mark and Kari Thronson from San Antonio, Texas, helped their freshman son, Tyler, move into his dorm on Friday. Kari Thronson told CNN’s Natasha Chen she felt comforted by the university’s protocols in place for their safety.

“I think it’s everywhere. I don’t think there’s any hiding from it. I think just protecting yourself is the best thing you can do,” Kari Thronson said.

Evania Lauscar, a freshman at Florida Atlantic who hopes to become a doctor one day, said she debated in July whether she would actually come to campus.

“I was thinking what if I do move in, and probably a week later or two, they tell us to go home? But I told myself I really want to be here and I kind of want to see this experience, so, so far it has been good, but it’s still a thought in the back of my mind,” Lauscar said.

Both Tyler Thronson and Lauscar said they have one course for which they need to attend in person, while the rest of the classes will be held remotely.

In other schools where students have moved in, university officials are working on limiting large group gatherings.

Incoming students at Northeastern University in Boston will need to find another school if they don’t agree to follow the university’s social gathering guidelines, according to a letter published Saturday on the school’s website.

New students who say they plan to either host or attend parties will have their offers of admission rescinded, according to the letter from Madeleine Estabrook, the university’s senior vice chancellor for student affairs. Current students can expect to be removed from university community, including the immediate loss of university housing, the letter said.

The university said it learned earlier this week that several students expressed on social media their intent to gather in large groups and to engage in parties.

Syracuse University in New York gave interim suspensions to 23 students after a large number of students gathered on the campus quad Wednesday night, according to a letter from Dean of Students Marianne Thomson and Public Safety Chief Bobby Maldonado.

Other colleges have already reversed plans for in-person classes and returned to remote learning after coronaviruses cases were detected on campus, leading to quarantines.

The University of Notre Dame in Indiana announced Tuesday that undergraduates would be learning remotely for the next two weeks after a spike in COVID-19 cases since students returned to campus on August 3. Since August 3, 372 students had tested positive, according to Notre Dame’s online health dashboard.