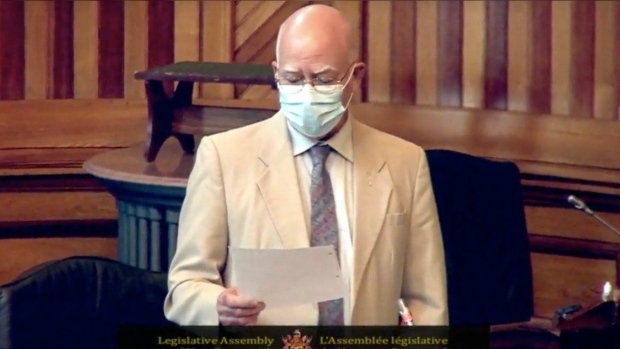 MONCTON — During this week’s legislature in New Brunswick, members of the Green Party raised questions about the mysterious neurological syndrome that has only affected people living in the province.

On Friday, Green Party Leader David Coon called on the province of New Brunswick to be more transparent when it comes to providing information about the neurological syndrome.

“Something doesn’t feel right about the discussion of the unknown neurodegenerative disease that has plagued 48 New Brunswickers and killed 6 to date,” said Coon. “CJD was ruled out 12 months ago but public health is only beginning its investigation.”

On Thursday, Megan Mitton, a Green Party member participated virtually in the legislature. Mitton asked the Minister of Health to provide a public briefing within the next week to inform the public.

“When people say we’re not being transparent as the opposition indicated today, I need them to understand that we are being as transparent with every bit of information we know,” said Minister Shephard.

In reference to the mysterious disease, Shephard said that the only thing that has been ruled out is Creutzfeldt-Jakob disease, a rare fatal brain disorder.

Moncton neurologist Dr. Alier Marrero is currently working with a team of researchers to help determine the cause.

According to Shephard, public health is currently working on completing an extensive questionnaire for their patients which is intended to rule out causes of the disease.

“Do I see a time period? I think the families are going to be contacted any day as those questionnaires are finalized and then they will be moving forward,” said Shephard.

Steve Ellis’s 63-year-old father Roger Ellis is one of the 48 cases under investigation. Ellis’ father is currently a suspected case.

“All we want is for them to share the process with us,” said Ellis. “What’s happening? What’s been ruled out? What are they considering?”

While being promised updates on the province’s website, Ellis says he’s been frustrated with the lack of information and would like to see the province hold public briefings.

“What I want to see from Minister Shephard and her team is to keep the promise that they made, to contact the confirmed cases,” said Ellis. “There are several confirmed cases that have been told by the clinic in Moncton saying that they will be contacted by public health.”

But Ellis says no one has been contacted yet.

Those who have a suspected or confirmed case of the disease have all lived or spent a prolonged time in Moncton, or the Acadian Peninsula. The patients between the ages of 18 to 85, according to the province’s health department.

Scientists are looking to the possibility of whether this disease could be caused by food or the environment, considering the cluster of New Brunswickers who may have it. Otherwise, very little is known about the illness.