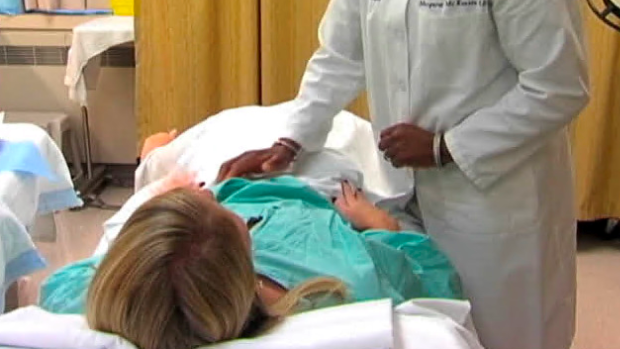 French President Emmanuel Macron made endometriosis a legally recognized chronic illness in January, which boosted services for millions of women living with the painful and debilitating disease. Now a group of doctors and patients representing an estimated one million women with the condition in Canada are advocating for the same recognition and help.

“People living with endometriosis have been waiting their whole lives to hear leaders recognize endo as a real significant chronic health problem,” EndoAct Canada executive director Kate Wahl told CTV News from Toronto. “It just reinforces the fact that this is a serious issue that merits national leadership and attention.”

Endometriosis is a frequently painful disorder that can lead to infertility. It occurs when growths develop inside the abdomen, often around the ovaries, fallopian tubes and the tissue lining the pelvis.

Launched shortly after Macron’s announcement, EndoAct is a national campaign that is highlighting how the illness affects one in 10 women and costs Canada an estimated $1.8 billion per year.

Endometriosis patient Feyisara Edu says she supports the campaign and has written to her federal representative about it. Edu suffers searing abdominal spasms so disabling she’s needed emergency care several times during the COVID-19 pandemic.

“I was so bad, I was in hospital for about three to four weeks,” the 36-year-old told CTV News from Tillsonburg, Ont. “So definitely I couldn’t work. I couldn’t do anything. Almost every other week, I’m off work because of this pain.”

Edu says she’s been waiting two years for surgery to remove the growths, which would relieve her excruciating pain and allow her to finally begin fertility treatments. Edu and her husband hope to have a child.

“Basically, I’m just using pain medication just to manage it pending the time I get my surgery,” Edu said.

There were already long waits for diagnosis and surgery before the COVID-19 pandemic, which has certainly made matters worse.

Dr. Sukhbir Sony Singh, a gynecologist at The Ottawa Hospital, says in severe cases, long waits for treatment can lead to bowel obstructions, blocked lungs and even organ damage as lesions in the abdomen expand.

“We do see kidneys that have, what we call, gone through silent death,” Singh added. “So, the kidney slowly ends up being blocked and dying by the time you see them.”

American comedian Amy Schumer went public with her surgery for endometriosis last September, which led to the removal of her uterus, appendix and 30 lesions.

“All my lifelong pain explained and lifted out of my body,” she said in an Instagram post.

Doctors suspect there are countless women across Canada who can’t get similar relief through timely diagnosis and treatment.

“I’m fearful that if we don’t acknowledge the true extent of this disease, more and more patients will be suffering,” said Singh, who is also the E. Jolly Research Chair in gynecological surgery at the Ottawa Hospital Research Institute.

Advocates say there are some small signs of progress. In March, Ontario will become the first province to hold an endometriosis awareness month after a private member’s bill asked that the disease be given attention. But doctors say more specialized diagnostic and treatment centres are needed, like the ones being planned in Australia and considered in France.

“If France can do it, right in the middle of the pandemic, it doesn’t make sense that we can’t,” Singh said.