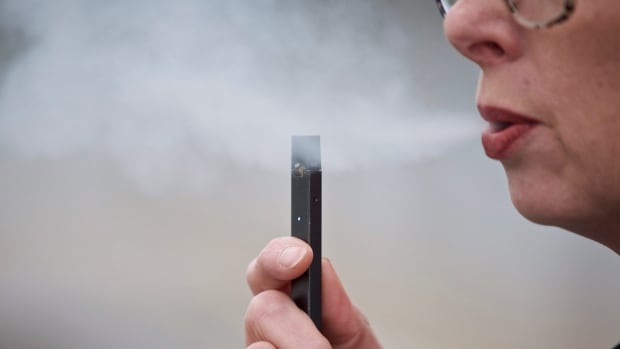 With government figures showing a spike in the number of young people vaping, the federal government is preparing to place stricter limits on advertising and make health warnings on vaping products mandatory, CBC News has learned.

However, Ottawa is not yet ready to go as far as many health advocates want by further restricting the flavoured vape products known to appeal to younger users. It’s also still considering whether to further limit the level of nicotine in vaping products. Under the Canada Consumer Product Safety Act, it is prohibited to sell vaping devices that contain 66 mg/g of nicotine or more because they have been deemed “very toxic” by regulators. Most products sold legally are well below that threshold.

The government has been considering the moves since consultations began in February.

Proposed regulations include banning advertising anywhere it can be seen or heard by youth, which includes public spaces, convenience stores and online.

They would also ban in-store displays of vaping products except for specialty stores that restrict entry to people 18 years or older.

Some brands already include health warnings on their products, but the proposed regulations would make it mandatory for all.

But that won’t go far enough for some public health advocates. Earlier this fall, organizations including the Canadian Medical Association called on the government to go further. They want more limits on the number of flavoured products available, in an effort to make vaping less attractive to youth. They have also called for stricter limits on nicotine levels.

The products seized include those that feature flavours attractive to youth because they mimic “confectionery,” soft drinks or energy drinks, and products that exceed existing nicotine levels or include banned additives.

Under existing regulations, the government has restrictions on which ingredients can be put in a vaping product.

According to the government official, many of the vaping-related illnesses reported by people in recent months have come from users of vaping pods purchased on the illegal market. These products often include a vitamin E acetate additive, which the U.S.-based Centers for Disease Control and Prevention has said is partly to blame for the recent spate of vaping-related illnesses.

All of this is happening as youth e-cigarette use skyrockets.

According to the government’s figures, via the Canadian Student Tobacco, Alcohol and Drugs Survey, the number of students (grades 7-12) who say they have used an e-cigarette in the past 30 days has shot up to 20 per cent in 2018-19 — double the number from the previous year.