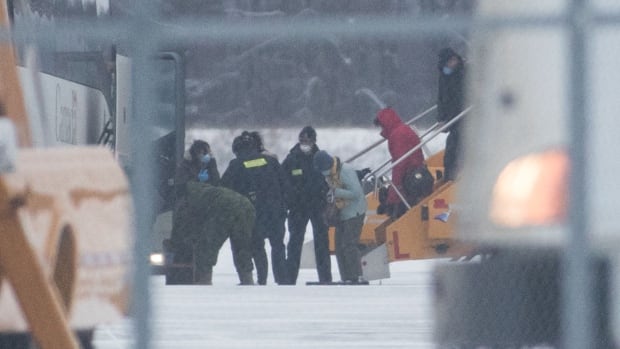 No one on board the airlift from Wuhan, China that landed at CFB Trenton in Ontario Friday morning showed symptoms of the coronavirus or any other illness during the flight, Health Minister Patty Hajdu said today.

The plane left Wuhan on Thursday and stopped in Vancouver to refuel before carrying on to the Ontario military base.

“Fortunately, no one showed symptoms on the plane, so no one had to disembark at the fuelling station in Vancouver,” Hajdu told host Matt Galloway in an interview on CBC Radio’s The Current.

Megan Millward was on the plane carrying Canadians who left China amid the coronavirus outbreak, she describes her experience. 6:08

Passengers who returned on both the flights out of Wuhan are now under a 14-day quarantine at the military base to see if they develop symptoms of the novel coronavirus.

Hajdu said the evacuees experienced a “tremendous amount of stress,” anxiety and boredom during the lockdown in Wuhan. Many of them have been separated from their children or have had to leave loved ones behind.

The 176 passengers on board the plane from Wuhan will now enter a 14-day quarantine period at the army base in Ontario. 0:55

Mental health services will be provided on the base, she said, and officials are taking steps to keep people occupied while under quarantine, such as setting up play centres for the kids.

“Although the passengers won’t be interacting with each other, there will be opportunities for them to leave their room and entertain their children, and of course all of that will be co-ordinated with the health officials that are there,” she said.

Later in the day, an official with Hajdu’s department said the passengers will be permitted to exercise in outdoor spaces but will be asked to stay two meters apart.

CFB Trenton is equipped to provide basic care for any passengers who become mildly ill. Those needing a higher level of care will be transported to either Trenton Memorial Hospital or Belleville Memorial. Both hospitals have a combined total of 18 negative-pressure rooms for the isolation of patients.

Campbell said an infectious disease specialist is on call in Kingston “for our immediate referral.”

Megan Millward, who is under quarantine with her husband and two children, told CBC News Network Friday that her family is being permitted to go outside their room on the floor, and outside for exercise.

There were 176 passengers on board the Canadian airlift. Some who had told the government they intended to take the flight were not on board; an official said some were not allowed to board due to medical reasons — not necessarily the coronavirus — and others may have changed their minds at the last minute.

Hajdu said evacuees undergo an initial screening before being shown to their rooms, where they’ll have time to rest before a more comprehensive assessment. They will be continually monitored by medical officials at the base and will be transferred to a local hospital if they develop any symptoms.

The National looks inside the quarantine zone at CFB Trenton where the Canadians airlifted out of Wuhan, China, will stay for two weeks. 2:12

Meals will be delivered to the rooms and social interactions will be limited.

Some countries, including the United States, have restricted entry to travellers from China.

Hajdu said the World Health Organization (WHO) has given recommendations on measures to stop the spread of infectious diseases.

“Border controls are the least-effective way to contain the spread,” she said, adding that screening, sharing information and following medical advice are the best measures.

WHO officials in Geneva provided updated numbers on the spread of the coronavirus Friday, reporting that China now has 31,211 cases and 637 deaths. Outside of China, 270 cases have been reported in 24 countries, along with one death.

Seven cases have been reported in Canada — three in Ontario and four in British Columbia.

WHO officials said there is a dire need for medical supplies like masks and respirators in China and are asking other countries not to “hoard” their supplies.

Myriam Larouche, a 25-year-old from L’Ascension, Que., told The Canadian Press that the stretch from Wuhan to Vancouver was “pretty long” but most people on the plane slept through much of the flight.

“I think I’m going to sleep for 20 hours straight,” Larouche said, adding that the last few days have been stressful.

Foreign Affairs Minister Francois-Philippe Champagne said there was a “small number of no-shows” at the airport in China because some people changed their minds about leaving.

Public health officials say the overall risk to people in Canada from the novel coronavirus is low.

WATCH | What we actually know about the coronavirus: