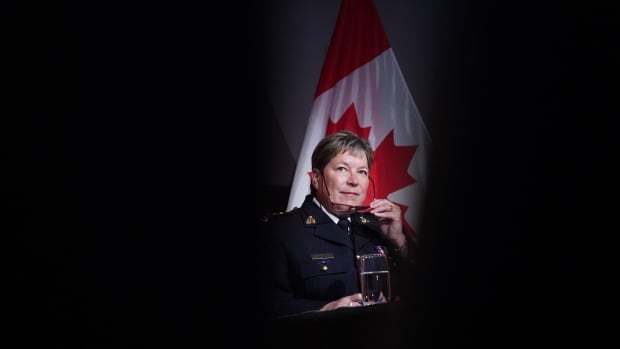 The head of the Royal Canadian Mounted Police said today the number of mental health calls her officers respond to is growing exponentially, as she defended Mounties’ record against growing calls to reallocate police funding to better fund social services.

“At three o’clock in the morning, when somebody is wielding a knife and they’re suffering from a mental health crisis, that is not the time to bring in mental health practitioners,” RCMP Commissioner Brenda Lucki told members of the House of Commons public safety and national security committee.

“It’s time for the RCMP to go in, get that person calm, get them to a place of safety and get them the help they need.”

Lucki was answering a question from Liberal MP Gary Anandasangaree about calls to “defund the police” — a catch-all phrase for proposals ranging from reallocating police funding to social services to the complete abolition of police forces.

“When I think of the defunding, I think more about funding all social services. Having policed in the North myself, [where] in many communities there is no addictions counselling, there is no mental health crisis centres … in those times of crisis we are the first response,” she said.

“So it’s not about defunding. It’s about funding everything that goes along. And I think we can work better with our mental health practitioners.”

The RCMP is under pressure to explain why an officer shot and killed Rodney Levi, a member of the Metepenagiag First Nation in New Brunswick, earlier this month. His death is now under review by an outside police watchdog agency.

Levi was the second Indigenous person in New Brunswick to be shot by a police officer in just eight days. Chantel Moore, 26, was shot by an officer with the Edmundston Police Department on June 4; her death is also the subject of an outside investigation.

WATCH |  ‘When I think of the de-funding I think more about funding all social services.’

Brenda Lucki is the Commissioner of the Royal Canadian Mounted Police testifies before the public safety committee on Parliament Hill. 1:05

According to a 2018 CBC News investigation of police killings across Canada between 2000 and 2017, the RCMP recorded the greatest number of fatal encounters over that period — 118.

That investigation also showed that of the more than 460 people who died in encounters with police across Canada since the year 2000, a substantial majority suffered from mental health problems or symptoms of drug abuse.

Just today, a video emerged as part of a civil lawsuit filed in B.C. Supreme Court. It shows an RCMP officer in Kelowna dragging a female nursing student down a hallway and stepping on her head after a wellness check at her apartment.

Lucki said her officers, who act as the provincial police in most provinces and all three territories, respond to about 10,000 mental health calls a month.

“They have to prepared for everything,” she said. “Our calls to mental health are growing exponentially.”

The House’s study comes as pressure mounts around the world to rethink police budgets and use of force in the wake of George Floyd’s death in police custody in the U.S.

In Canada, the RCMP has come under intense pressure to be more sensitive to racial issues in recent weeks after a number of controversial incidents were caught on camera.

Video emerged earlier this month showing an RCMP officer slamming the door of his vehicle into an intoxicated man. That case is under review.

Around the same time, a video surfaced of an RCMP officer tackling Athabasca Chipewyan First Nation Chief Allan Adam outside of a casino after he was stopped for driving with expired plates. The officer said the chief was resisting arrest.

Earlier this month, Lucki faced a backlash for saying in several media interviews that she was struggling to define the term “systemic racism”. She later reversed herself, issuing a statement saying she believes systemic racism exists in the RCMP.

Lucki told the committee that the number of high-profile incidents making headlines in recent days has had a bad effect on Mountie morale.

“I have listened to RCMP employees and their families who are demoralized by the anti-police narrative that is painting everyone unfairly with the same brush,” she said.

“But acknowledging that systemic racism is present in the force does not equate to employees being racist.”

The head of the RCMP promised to “double down” on efforts to build a more diverse police service — a pledge that comes during a tumultuous time for the Royal Canadian Mounted Police and police services everywhere.

“Let me say, we are committed to seek out and eliminate all forms of racism and discrimination in our organization,” she said.

“We really need to double down on hiring a more diverse membership as we want greater diversity to reflect the communities that we serve.”

A report on employment equity for 2018-19 says the diversity of the RCMP’s overall workforce had “not changed by any significant measure” since the previous year.

The report says that on April 1, 2019, representation rates among regular RCMP members (as opposed to civilian employees) were 21.8 per cent for women, 11.5 per cent for visible minorities, 7.5 per cent for Indigenous Peoples and 1.6 per cent for people with disabilities.

Lucki said the force is reviewing its recruiting and training process for signs of “unintended bias” and is taking a second look at the RCMP’s relocation practices to allow officers to remain in the communities where they have roots.

“In terms of doing more to address systemic racism going forward, we are reprioritizing and enhancing our action plan to make changes at all levels, from recruiting to training to reporting and accountability,” she said.

She also committed to working with the federal privacy commissioner on the collection of race-based policing data — something advocates have called for to get a better sense of, for example, how many times police use force on visible minorities.