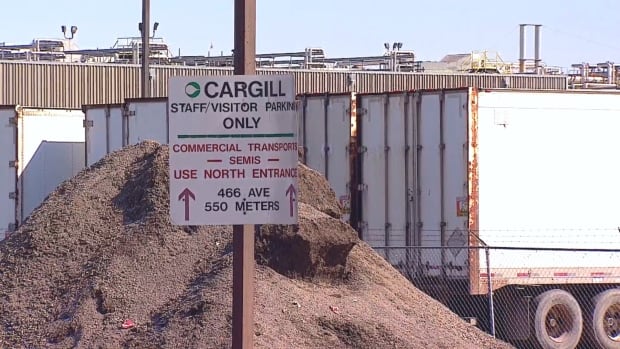 Alberta Occupational Health and Safety is investigating two outbreaks of COVID-19 at Alberta meat-processing plants, one of which is the largest outbreak linked to a single site in Canada.

There are now 580 cases linked to the outbreak at the Cargill facility near High River, 440 of whom are Cargill employees.

One worker, a woman of Vietnamese background in her sixties, has died. Her husband is also sick and is being treated in hospital. The facility said Monday it would temporarily shut down as soon as it finished processing the meat already in the plant.

Another Alberta meat plant experiencing an outbreak, JBS in Brooks, remains open but production has been reduced to one shift. There are now 96 cases linked to that plant.

A worker at JBS has died, and Alberta Health Services is investigating to confirm if that death is due to COVID-19.

Nobody wants to eat a hamburger that somebody had to die to produce.– Thomas Hesse, UFCW Local 401

Alberta’s deputy minister of labour said investigations into both plants have been opened by OHS, and said there will be no further comment until the investigations are complete.

The union brought the first 38 cases of COVID-19 at the plant to the attention of media on April 13, as some employees at the facility accused the company of ignoring physical-distancing protocols and trying to lure them back to work from self-isolation.

Two days later, an inspector from the provincial Occupational Health and Safety — which has a mandate to ensure Alberta workplaces are operating in a way that is healthy and safe for employees — conducted an inspection from a remote location via a live video call.

A COVID-19 outbreak at the Cargill meat processing plant in High River, Alta., has forced the facility to temporarily close, raising concerns about beef prices and supply. 3:03

Thomas Hesse, president of UFCW Local 401, which represents workers at the plant, called for the facility to close weeks ago and has since called for an inquiry into the worker’s death.

“Nobody wants to eat a hamburger that somebody had to die to produce,” said Hesse.

In addition to an OHS fatality inquiry, the union has called for an independent investigation into Cargill, and the Alberta Federation of Labour has asked for a criminal investigation.

Premier Jason Kenney said Wednesday the JBS plant can remain open with necessary health and safety precautions in place as long as health officials say it is safe to do so, as it’s important to maintain the country’s food supply.