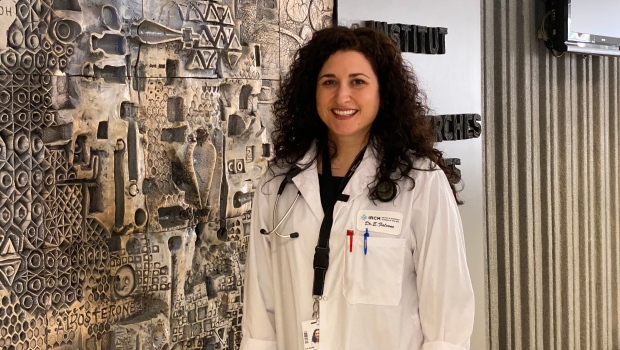 MONTREAL — A top long-COVID researcher in Montreal who’s recovering from a recent infection herself is urging the population to get vaccinated, and beyond that, to do whatever it takes to avoid catching the virus altogether.

“This isn’t like a regular cold,” infectious diseases specialist Dr. Emilia Liana Falcone said, explaining that nobody should be under the impression that catching Omicron, or any other variant, is a good idea.

“Even individuals who have very mild symptoms or even no symptoms can develop long-term sequelae (after-effects) of COVID,” she said, adding that applies to people who are vaccinated and unvaccinated.

As the director of the Long-COVID Research Clinic at the Institut de recherches cliniques de Montreal (IRCM), Falcone has seen patients who are 18 months post-infection and still have lingering and sometimes serious health problems.

“It’s extremely alarming. Several who were very high functioning, very healthy now find themselves in a situation where they just cannot go back to work. They’re more than a year out. And they’re basically taking early retirement in some cases,” said Falcone.

“I’ve actually heard so many different accounts. And it’s just unbelievable to see the extent to which these individuals’ lives have been compromised.”

And then in mid-December, the virus hit home. Falcone caught COVID-19 from one of her young children. She was double vaccinated and was about to get her booster when she got sick.

The specialist began to suffer some of the same symptoms as the patients she’s been treating for the last two years at the CHUM, where she also works.

“I counted more than seven acute symptoms,” during the active phase of infection, she said, including extreme fatigue.

“The first thing and the absolute predominant concern I had was, oh my goodness, am I going to have long-COVID symptoms, how will I be able to continue my work, if I have any kind of compromise in my abilities?”

Four weeks later she’s functioning and working harder than ever during this fifth wave, but she’s still battling her way back from the illness.

“You feel there’s something lingering, you do feel tired,” Falcone said, adding it’s allowed her to gain a better understanding of what her patients have been going through.

The significant impact of long COVID will be felt in Quebec soon and in the long term, the chief physician of the province’s scientific immunization group said in an interview with CTV News.

“For sure long COVID will be a lasting legacy of this pandemic,” said Dr. Gaston De Serres, an epidemiologist at the Quebec Institute of Public Health (INSPQ).

“If one, two or three per cent of patients who got COVID keep long-lasting symptoms that will be a quite heavy burden on this health-care system and on individuals.”

Particularly worrisome is a large number of health-care workers – some 20,000 of them, Quebec’s health minister said on Thursday — who are off sick with COVID-19.

Not only is the hospital network straining to provide patient care without them, but there is no guarantee they will all fully recover and be able to return to work quickly.

“Long COVID is a real problem that is quite unique,” unlike other common respiratory illnesses, De Serre said.

Researchers at the INSPQ have followed health-care workers to see how long COVID-19 symptoms persisted beyond the acute phase of infection.

“We see in a substantial proportion of them that, you know, months after being sick, they still have problems,” De Serres said.

“All of this is quite disturbing to individuals and I don’t think it should be dismissed at all,” De Serres said.

In addition, patients who are part of Falcone’s research clinic often report a lack of motivation, shortness of breath, and post-exertional malaise, which happens when a person exerts themselves mentally or physically and becomes exhausted as a result, sometimes taking weeks to recover.

Many of the nurses in the INSPQ study also lost their sense of taste and smell for months, something De Serres said might be “a minimally bothersome problem,” to some, but not everyone.

Falcone describes the case of one patient who still suffers from a persistent distorted sense of taste and smell that has created dangerous health problems.

“It has significantly altered that person’s diet to the point that there is weight loss and malnutrition, she said.

While there’s still a lot to learn about Omicron, now considered to be the dominant variant circulating in Quebec, de Serres reiterates that people shouldn’t be under the illusion “that Omicron is now just a little cold.”

“I think that we should not be flippant about Omicron and think that this is nothing to fear,” said De Serres.

While the variant is not causing as severe an illness as the Delta variant, he said, “it may be more harmful because it affects more people.”

That means that even if the proportion of patients who have severe outcomes is smaller, there’s likely to be a significant number of people with severe disease.

“We see that in the current numbers of people being hospitalized. So for long COVID, the same might apply,” De Serres explained. “We should have absolutely no doubt that there will be long COVID following Omicron.”

People need to get their third dose to protect against severe disease and reduce their contacts to try and prevent infection, he said.

‘IT’S BETTER NOT TO GET IT’

Elementary school teacher Peggy O’Neill has been through the long-COVID wringer since the early days of the pandemic when she was first infected.

“I had chest pain, really bad and I wasn’t sure what to do, said O’Neill who teaches Grade One at Mountain View Elementary School.

“So I called my friend who’s a nurse and she said go to the hospital. And when I went to the hospital, they kept me overnight because they said I’d had micro pulmonary embolisms,” she explained.

O’Neill was sent for heart and lung tests and took two weeks off work to rest.

But it took a lot of time for her energy to return, an unusual scenario for the fit 50-year-old, who cycles, jogs, does yoga and works with about 23 rambunctious six-year-old children daily.

She thought she might be putting the lingering symptoms behind her but eight months later she said she “started to have weird things like I would get this musty smell. A smoky, musty smell.”

“I was just really going weak and I had tingling in my extremities, my fingers and my toes. I didn’t have my cardio and endurance anymore,” O’Neill explained.

But she made it back to the classroom and by then double vaccinated, moved forward until everything came to a screeching halt again in December.

“I started to have sore throat headache. I felt really sick,” the teacher said. “I was so mad!”

A rapid test taken at school came back positive and home she went –discouraged.

“Since the first time I got it, I haven’t returned to my normal self,” she said.

I don’t think people think about that,” she said referring to the long-lasting health concerns that have dogged her for more than a year.

Her impression is that people generally tend to think they’ll automatically sail through it.

“But with COVID I think it’s very insidious,” she said.

While it’s not known how frequently they’re affected, children can suffer from persistent post-COVID symptoms as well.

“Most pediatric patients have the same symptoms as the adults. So fatigue is really frequent. We have a lot of shortness of breath and memory problems, said Dr. The Thanh Diem Nguyen, a pulmonologist at Ste-Justine Hospital.

A post-COVID clinic where she works is following about 20 children now between the ages of 12-16. One child has been suffering persistent post-COVID health problems for the last 18 months.

“A small number of patients will have difficulty to go back to school, back to sports, and some with memory problems will fail their course or exams,” the pediatrician said.

“People have to be aware we don’t know all about COVID. We don’t know what the long-term impact will be on the body. So I think if we can decrease the risk by getting vaccines, following sanitary guidelines, that’s my strongest recommendation.”