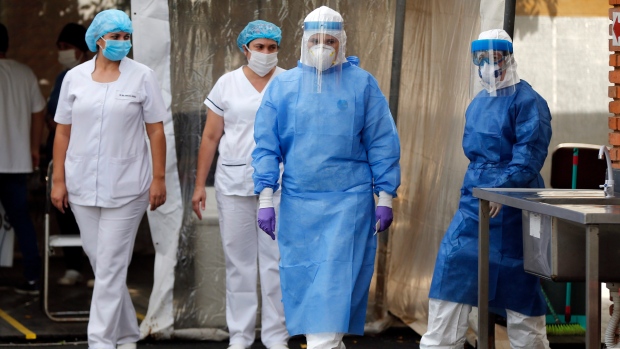 TORONTO — More than 600 nurses around the world have died from COVID-19 and approximately 230,000 health-care workers have contracted the virus, according to the International Council of Nurses (ICN).

The ICN, which represents 130 national nursing associations and more than 20 million nurses, released the figures in a bid to convince governments to collect accurate data on infections among health-care workers in order to protect them.

“For weeks now we have been asking for data about infections and deaths among nurses to be collected,” Howard Catton, ICN CEO, said in a press release Wednesday. “We need a central database of reliable, standardized, comparable data on all infections, periods of quarantine and deaths that are directly or indirectly related COVID-19.”

Catton continued that, without this data, it will be impossible to know the “true cost” of COVID-19 and it will hinder efforts to respond to other pandemics in the future.

“This must not be allowed to continue and ICN demands that action is taken now to put this situation right,” he said.

The ICN’s estimation of more than 600 deaths among nurses and more than 230,000 infections came from data from national nurses associations, official figures, and media reports from a “limited number of countries.”

According to the analysis, the death toll has more than doubled since May 6, when the ICN reported more than 260 COVID-19 deaths among nurses and 90,000 infections worldwide.

“Nurses and other staff are at great personal risk, and so are the patients they care for,” the press release stated.

The ICN stressed, however, that the proportion of health-care worker infections varies widely between countries because many of them aren’t recording this data, which “makes meaningful international comparisons extremely challenging.”

Because of this lack of data, the ICN said that a number of questions concerning infections among health-care workers still can’t be answered.

Some of those questions include:

The ICN said those questions won’t be answered until all countries keep comprehensive, standardized data that is collated centrally on a global scale.

“Nursing is looking like one of the most dangerous jobs in the world at the moment,” Catton said.

“We need to get this data for every country and work out exactly what is going on that explains the variations that are evident with even a cursory glance at the figures. Only then will we be able to learn how best to keep our nurses safe and prevent any repeat of these terrible statistics in the future.”