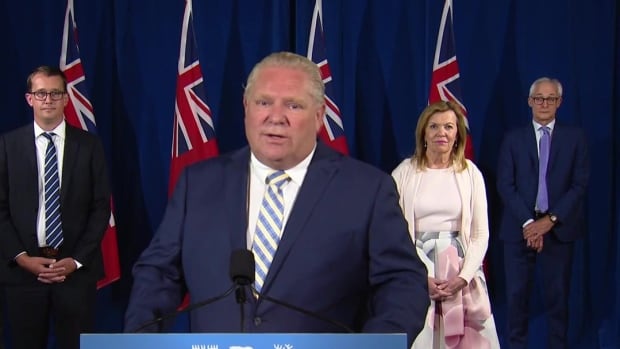 Ontario Premier Doug Ford has confirmed that the province’s emergency management team has been deployed to Windsor-Essex.

“It’s all hands on deck,” he said, during a daily COVID-19 briefing on Friday. “I want to try to help them, I feel terrible for the situation they’re in.”

The province’s emergency management team is working with members of the Canadian Red Cross already in the area, as well as Public Health Ontario, to address growing concerns about COVID-19 cases among agri-farm workers in the region.

In an emailed statement, the Red Cross said Friday that it is “working closely with provincial and municipal authorities to determine the needs of migrant workers and the community” in the region and is taking part in ongoing discussions.

This statement from the group was the exact same one it had previously provided earlier this week on whether it was stepping in to help farms in the region.

During the presser, Ford also apologized for criticizing migrant workers during his briefing Thursday, when he said they were hiding from efforts to retest them for COVID-19.

Ford says his comments were based on misinformation but declined to say how he received the erroneous report.

Ford says they have all hands on deck and are working quickly to resolve the situation 1:22

Speaking at the same Friday briefing, Ontario’s chief coroner Dr. Dirk Huyer explained that the emergency management team is “providing support for the workers from one farm, where there was the notable number of positive COVID-19 findings, as well as those who may have been in contact with those positive workers.”

Huyer added that the team is helping coordinate care, accommodations, as well as food for workers at the facility.

Dr. Wajid Ahmed, medical officer of health for Windsor-Essex, was asked earlier Friday morning if the province’s emergency management team was on the ground here. He wouldn’t confirm its presence.

“We have been in conversation with the Ministry of Health Operations Centre regulars to help us,” he said. “There are a number of parties involved in that conversation. I cannot say if they are here or not.

An email statement to CBC News Friday from a spokesperson for federal Health Minister Patty Hajdu said that Canada has taken a number of “substantial and important steps to ensure both Canada and employers could safely welcome temporary foreign workers during the pandemic.”

Dr. Dirk Huyer says the team will support the agri-farm workers and ensure they are properly cared for 1:45

One of the steps was an email from Minister of Employment, Worforce Development and Disability Inclusion Carla Qualtrough sent to the Mexican Ambassador to Canada on June 19.

The email listed several short-term measures to enhance the safety of temporary foreign workers, including increasing outreach to workers, having investigations for workplaces in outbreak and educating employers.

The statement from Hajdu’s spokesperson continued to say that the minister recognizes there is “more to do to protect temporary foreign workers in Canada, and we are committed to looking at additional steps we can take in order to do so.”