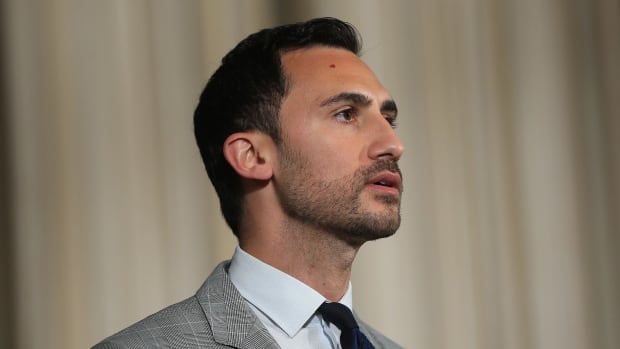 Ontario’s Education Minister Stephen Lecce has tested negative for COVID-19 after he recently came into contact with someone with a confirmed case. Ontario Premier Doug Ford and Health Minister Christine Elliott are getting tested “out of an abundance of caution,” the premier’s spokesperson said on Wednesday.

The province abruptly announced that Ford and Elliott would not participate in Wednesday’s daily news conference, just minutes before it was set to begin.

“Premier Ford and Minister Elliott will be getting tested today. Both will continue to monitor for symptoms and take appropriate action as necessary,” spokesperson Ivana Yelich said in a statement.

Yelich says the government will notify the public of the test results.

Ford appears to be the first premier to publicly announce his testing for COVID-19.

At the news conference on Wednesday, Minister of Colleges and Universities Ross Romano said he had learned the news “a matter of minutes” before coming to the podium.

“I know our premier is acting out of an extreme abundance of caution,” Romano told reporters.

In a statement sent out just before 2 p.m. ET on Wednesday, Lecce said he’s been isolating at home since learning of the possible exposure, adding he was “informed minutes ago” about the negative results.

“The premier and Minister Elliott have been extremely clear: If you feel you need a test, you should get tested. We all have a role to play in combating this virus,” the statement read.

Neither the premier’s office nor a spokesperson for Lecce would say how he came into contact with a positive case, or why his possible exposure wasn’t made public sooner.

The premier’s office would also not confirm whether Ford had been in self-isolation while awaiting Lecce’s test results.

According to the premier’s office, Doug Ford had not been in contact with his nephew in the past two weeks.

Ontario reported 251 additional COVID-19 cases, and testing levels jumped back above the province’s target on Wednesday.

It’s the second straight day with a growth rate in new daily cases of about 0.8 per cent, a figure not seen in Ontario since late March.

There have now been 31,341 confirmed cases of COVID-19 in the province since the outbreak began in late January. For the first time, a full 81 per cent of those are being classified as resolved. Some 551 cases were marked resolved yesterday.

Elliott said in a tweet that 59 of today’s new cases are related to an outbreak in southwestern Ontario, where “public health officials are hard at work to contain an outbreak.” The “vast majority” of the others are in the Greater Toronto Area, she added.

There are now 3,486 active COVID-19 cases across the province, more than 300 fewer than yesterday. In late May, there were more than 4,000 active cases.

Ontario’s network of community, commercial and hospital labs processed 19,941 tests on Tuesday, more than the benchmark of 16,000 per day set in April. The Ministry of Health says the system has capacity for nearly 25,000 on any given day.

The backlog of test samples waiting to be processed stands at 13,897, meaning more than 20,000 were added to the queue yesterday.

Meanwhile, the number of patients with confirmed cases of COVID-19 in Ontario hospitals continues to decline and now stands at 580, the fewest since April 5.

Those being treated in intensive care units rose slightly to 118, up from 116, and those requiring a ventilator dropped by two, down to 86.

Ontario’s official COVID-19 death toll grew by 11 and stands at 2,475. A CBC News count based on data from regional public health units puts the real current toll at 2,523. About 78 per cent of all deaths in the province were residents of long-term care homes.

Public health officials have tracked outbreaks of the novel coronavirus in a total of 312 long-term care facilities, and 75 remain active.

In-person post-secondary training to resume for some students

Starting July 2, some in-person training and classes will resume for post-secondary students in Ontario who may have missed out on graduating due to the pandemic — students Romano described Wednesday as “academically-stranded” while they wait to complete a practicum or lab work.

WATCH | Minister of Colleges and Universities on resumption of in-person training for some students:

In-person education and training is set to restart as early as July 2 for “academically stranded” students — those who could not graduate because they weren’t able to complete in-person education or training, said Minister of Colleges and Universities Ross Romano. 1:14

“These students in areas such as nursing, PSWs [personal support workers], engineering students and many, many different trades programs — these individuals could be working today helping in Ontario’s economic recovery but for the fact that they must complete a mere matter of hours, in some cases, of in-person learning,” Romano said.

Of the province’s 600,000 post-secondary students, approximately 10,000 are eligible to participate in the program.

This would be, at most, an eight-week session ending around the beginning of September, Romano explained.

In the four weeks leading up to the start of the reopening, colleges and universities will be preparing classrooms using new health and safety guidelines set out for them by the government.