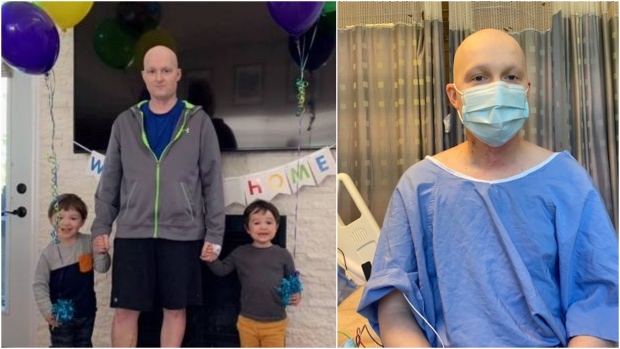 TORONTO — An Ontario father is cancer-free after a rare life-saving surgery performed by a Toronto cardiac surgeon.

“It’s surreal. I play with my kids, I get to call my family and tell them the good news. It’s overwhelming, it’s amazing,” Ross Mangan told CTV News Toronto.

The turnaround comes just six months after Mangan, 31, a Kingston, Ont. father of two young boys found out he had a rare tumour on his heart. He was told at the time he had less than one year to live.

The initial symptoms of his cancer appeared to come on suddenly in November.

“I ended up fainting and hitting my head,” Mangan said. “My wife called an ambulance. They ended up taking me in and finding out I had a lot of fluid around my heart which led team to find the cancer that was on my heart.”

At first the tumour was too advanced to operate. There was a biopsy, chemotherapy, then the intricate surgery.

“Remove and rebuild probably about a quarter of his heart, including a heart valve, blood vessels leading out of the heart, part of the heart, base of the heart, did a bypass on him, so that’s sort of something I’ve gained with experience here,” said Cusimano.

Cusimano explained that not only is Mangan’s cancer rare, so too are the number of doctors doing the procedure.

This year he organized a conference and started an international heart cancer registry to help patients and medical teams.

Cusimano didn’t tell Mangan when they first met just how close he was to death at the time.

“People often say to me, ‘Doctor, how can I ever thank you?’, just the fact that we took somebody who six months ago who had less than a month to live probably … to a point where the chemotherapy worked on him, and when it worked on him, I was able able to rebuild his heart, and the fact that we left no cancer behind, that’s the thanks I get from him. That’s why I do this sort of thing.”

On Wednesday, Mangan went home, reuniting with his wife and boys, two and four years old.

“You think of all the things you’re going to miss and not be a part of. It was heartbreaking. Even to be home with them [the boys] to play is phenomenal. It’s such a great feeling.”