TORONTO — Ontario hospitals are being asked to stop throwing away any used personal protective equipment as the Ministry of Health investigates whether face masks can be sanitized and reused amid a province-wide shortage.

The province’s deputy health minister issued a memo to hospitals on Apr. 5 asking them to “store used PPE securely” to ensure that the healthcare system is “ready for all possible scenarios.”

The memo said the move was sparked by the Public Health Agency of Canada “which asked Canadians not to dispose of their used PPE but to save it for potential reuse.”

“While we are waiting on the evidence and guidance for reuse, Ontario Health is asking hospitals to store used PPE securely and is distributing a survey to understand hospital capacity for reprocessing, based on promising technologies to safely reuse PPE,” the memo reads.

“I’ll just give you an idea of what Quebec is doing right now, they’re sanitizing and re-using masks, they’re re-using them four or five times,” Ford said during his daily news conference on Monday.

“We’re thinking about it, but we haven’t done it yet.”

In an online post, Sunnybrook Hospital’s Patient Health Navigator said N95 masks are currently being collected, placed in self-sealing pouches and labeled by the staff member who used the mask.

A photo sent to CTV News Toronto from a staff member at a Mississagua hospital shows the bags employees are using to sort protective equipment, including N95 masks for possible reuse. 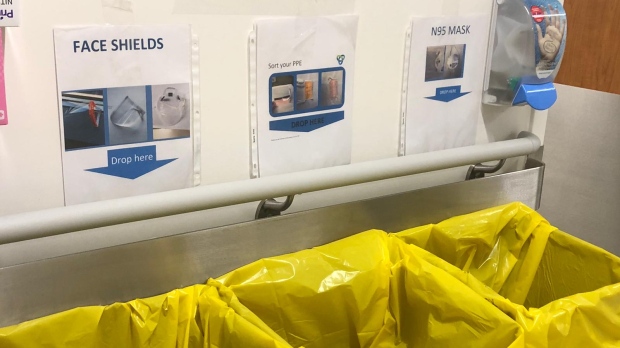 In a study conducted by the University of Manitoba – which has yet to be peer reviewed – Canadian researchers subjected four N95 respirator masks to a decontamination process and discovered that the lifespan of a single mask could be extended “several-fold without degradation of functional integrity.”

Researchers also found that a majority of the masks they tested “tolerated up to 10 cycles” in a standard industrial sterilization machine commonly found in hospitals and maintained their “structural and functional integrity.”

The Ministry of Health memo said the provincial command table, responsible for all COVID-19 related planning and decision-making, is considering the “evolving evidence” and is doing pre-emptive preparatory work in the event that the province runs out of equipment.