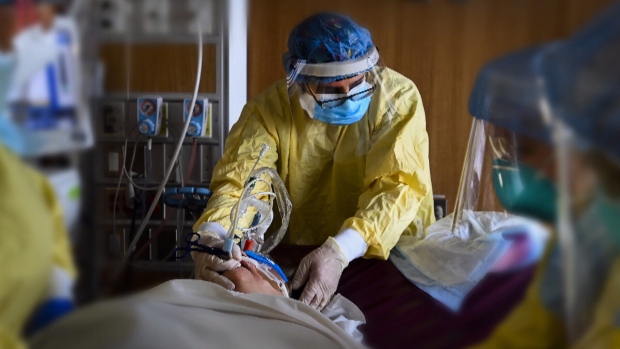 Ontario hospitals are feeling the brunt of soaring COVID-19 case counts as the virus rips through the province at record speed and infects high numbers of patients and health care workers.

The situation has become so serious that some hospital networks are reporting hundreds of their staff members have tested positive for the virus, are symptomatic or are in isolation after an exposure.

Kevin Smith, the president and chief executive officer of Toronto’s University Health Network, says those factors combined have resulted in at least a hundred staff absences per day as the highly transmissible Omicron variant drives case counts to unprecedented highs across the province.

The number of staff unable to work at UHN’s five facilities in recent weeks, including Toronto General, Toronto Western and Princess Margaret Hospitals, is higher than what the facilities experienced in previous waves of the virus.

The high number of unavailable staff comes as Smith has noticed fewer people entering hospital critically ill from the virus. This despite the fact that Public Health Ontario reported 16,714 new infections on Sunday and a record 18,445 cases Saturday, noting both figures are considered underestimates.

The number of active cases in the province has now crossed the 100,000 mark.

While Smith said staff are managing the current volumes well, he frets about the situation changing.

“I’m obviously worried that as we get people engaged in larger and larger amounts of social interaction, including in schools and other environments, there is risk of additional and significant spread,” he said.

“Our hope is that populations like those wouldn’t require hospitalization, but we have to be prepared for the fact that they will because in other countries, we’re seeing kids admissions going up.”

He is also looking at redeploying staff to areas most in need and pulling hospital doctors and nurses back from vaccine clinics, where they can be replaced with other regulated health care workers.

Earlier in the week, organization President Rob MacIsaac asked vacationing, part-time and casual staff to pick up extra hours in exchange for premium pay up until Jan. 5.

He made the appeal as the new year began with at least 411 of his staff in isolation at home and numerous outbreaks across his hospital sites.

“Unfortunately, the Omicron variant has set us back several steps,” he said in a news release. “Consequently, we are once again facing immense pressures around hospital occupancy and staffing.”

His hospitals were experiencing an increase in patients who have tested positive for COVID-19. Many were admitted due to medical conditions not linked to the virus, he said.

More than 100 in-patients at his hospitals were positive for COVID-19 as of Dec. 31 and 13 were in intensive care units.

Emergency department volumes were simultaneously exceeding pre-pandemic volumes and seeing an increase in the number of patients arriving to the hospitals by ambulance on a daily basis.

On top of asking health care workers to pick up extra shifts and hours, he said his organization would turn to “extraordinary measures” like ramping down “procedural and scheduled care” beginning Jan. 4 to divert resources to areas of “greatest need.”

He also said he would soon share more information on plans to call back asymptomatic staff with a negative rapid antigen test, who are currently isolating at home, as well as efforts to deploy workers from ambulatory areas to support in-patient care.