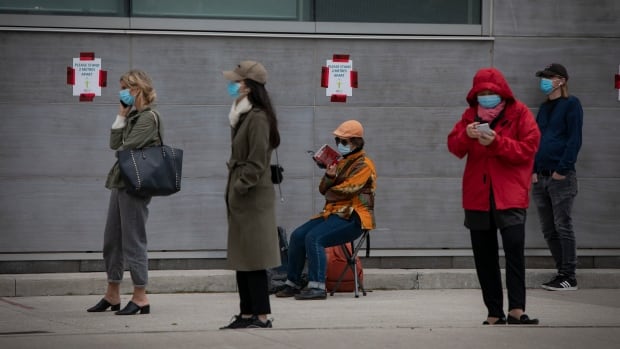 The Ontario government is implementing a number of new provincewide restrictions and public health measures aimed at curbing a surge in new cases of COVID-19.

“Over the past five weeks, Ontario has experienced an increase in the rate of new COVID-19 cases,” the province said in a news release Friday afternoon.

“Private social gatherings continue to be a significant source of transmission in many local communities, along with outbreak clusters in restaurants, bars, and other food and drink establishments, including strip clubs, with most cases in the 20-39 age group.”

As a result, the government is taking the following measures:

The provincial government also said it will work with municipalities to ramp up enforcement of public health regulations.

At his daily press conference Friday, Ford said Toronto Mayor John Tory and other Ontario mayors had reached out to him and asked for these measures.

The premier said the vast majority of restaurant owners have been responsible, but “there have been outbreaks with staff members and that. It’s precautionary … it won’t be forever.”

Meanwhile, Ontario reported an additional 409 cases of COVID-19 for a second straight day on Friday, with about three-quarters of those cases found in the Greater Toronto Area.

Toronto itself saw 204 new cases, while Peel reported 66 and York had 33. Ottawa registered another 40.

Durham and Halton regions were the only other public health units with double-digit increases in newly confirmed infections, with 12 each.

Health Minister Christine Elliott said in a series of tweets that about 65 per cent of the new cases were found in people under 40 years old, including 10 more in students.

There have been, cumulatively, 238 school-related COVID-19 cases in Ontario: 110 students, 50 staff and 78 categorized as “individuals not identified.” Some 198 of the province’s 4,828 publicly-funded schools, or about 4.10 per cent, have reported at least one case.

The news comes as the province’s network of labs processed 41,800 tests for the novel coronavirus, though that figure includes tests that were left out of yesterday’s update due to a temporary outage at Public Health Ontario.

The backlog of test samples waiting to be processed grew to more than 65,000, the most since the outbreak of the respiratory illness began in Ontario in January, and by a considerable margin.

Starting today, some Ontario pharmacies are starting to conduct appointment-only COVID-19 tests for asymptomatic people, but only under certain conditions.

Ford said that next week, up to 18 more pharmacies in southwestern Ontario and Niagara Region will start offering tests, in places like St. Catharines-Niagara Falls, London, Windsor, Sarnia, Kitchener-Waterloo, Cambridge, and more.

“We’re going to keep expanding to more pharmacies across the province in the coming weeks,” he said.

Elliott and Ford said Friday that the province is investing millions of dollars to fix backlogs for surgeries and procedures that have been pushed off because of COVID-19.

“It will help us reduce the surgery backlog, while still ensuring patients will receive the care they need,” he said.

Yesterday, the provincial government rolled out an updated COVID-19 testing strategy that shifts focus back to symptomatic people only, with some exceptions, in an effort to relieve the burden on labs.

Ontario has now seen a total of 48,905 confirmed cases of COVID-19. Of those, about 86.2 per cent are resolved. Another 283 were marked resolved in today’s report.

There are currently some 3,899 confirmed, active infections of the novel coronavirus provincewide, the most since June 8.

Public health units with more than 100 active cases include:

Further, the number of people in Ontario hospitals with confirmed cases of the illness continues its slow but steady climb and now sits at 88. Twenty-five are being treated in intensive care, while 13 of those patients are on ventilators.

All of the figures in this story can be found in the provincial Ministry of Health’s daily update, which includes data from up until 4 p.m. the previous day. The number of cases for any particular region on a given day may differ from what is reported by the local public health unit.

NDP publishes its own recovery roadmap

Also today, the Official Opposition in the province published an updated version of its own COVID-19 recovery plan, called Save Main Street

The NDP says the Progressive Conservative government has been slow to dole out billions in federal relief funds in the province.

Among other things, the NDP is calling on the government to:

Still have questions about COVID-19? These CBC News stories will help.

Is another lockdown coming in Ontario? What do we know about the Ford government’s fall plan?

What’s the latest on where I should get tested?

It’s confusing, but here’s an explainer complete with a flow chart

What’s the most recent guidance on mask use?

What should I do about my COVID bubble?

With cases going up, even small gatherings are getting riskier

Who is getting COVID-19?