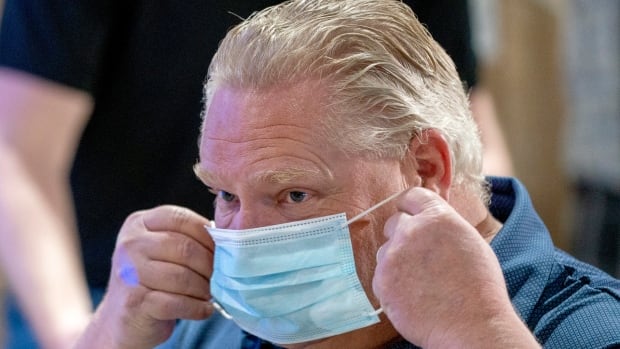 Ontario introduced new legislation Tuesday to enable the extension of some pandemic emergency orders over the next year, as the province reports 112 new cases.

The legislation, to be tabled Wednesday, would allow the government to extend or amend some emergency orders a month at a time, with the law expiring a year after it’s passed.

Solicitor General Sylvia Jones said the proposed legislation would “bridge the gap between the public health measures that were necessary to respond to the initial and immediate threat of COVID-19, and those now needed to support Ontario’s safe recovery.”

Under current legislation, the province can only issue emergency orders while the state of emergency is in place.

“This [new] legislation will not allow us to create any new emergency orders, they can only be amended or removed,” said Premier Doug Ford at a daily COVID-19 briefing on Tuesday.

Ontario’s state of emergency is set to expire July 15, and the Premier’s office said it would introduce a motion Wednesday to extend it until July 24 to ensure there is no gap between the provincial declaration and when the new bill takes effect.

If the bill passes, the government could move parts of the province back to earlier stages of the pandemic lockdown if required.

Emergency orders that permit the pick-up and delivery of cannabis and prohibit price gouging on essential goods will not be included in the bill, and will expire next week.

Jones said the bill will also introduce additional reporting requirements to bolster oversight. The government will have to report any emergency order extensions to a legislative committee once every month and table a report on the use of the law six months after it expires.

“We want to make sure that we’re not over-using the declaration of emergency,” she said.

Ontario first declared a state of emergency March 17 when the province’s COVID-19 cases began to increase.

The additional cases bring the total in Ontario since the outbreak began to 36,060. Of those, 87.6 per cent are resolved.

Another 177 instances were marked resolved yesterday, according to the Ministry of Health, meaning there are currently about 1,723 active cases of COVID-19 provincewide.

Twenty-eight of Ontario’s 34 public health units reported five or fewer new cases, while 23 of those 28 confirmed no additional cases at all, Minister of Health Christine Elliott noted in a series of tweets.

Ontario officially reported zero additional COVID-19-linked deaths in yesterday’s update, and only two more were confirmed today. That puts the province’s official death toll at 2,691, though a CBC News count based on data directly from public health units puts the actual toll at 2,734.

After steadily declining over the last week, the number of patients in Ontario hospitals with confirmed cases of COVID-19 jumped up slightly, to 131 from 118. Thirty-four are being treated in intensive care units, while 24 require ventilators.

Testing levels, however, dropped considerably. The province’s network of about 30 labs processed just 15,122 test samples, the fewest since June 1.

Minster of Health Christine Elliott said the province is averaging around 25,000 tests a day but is getting ready to increase the volume to 50,000 tests.

As flu season approaches come the fall, she said the province needs to ramp up testing volumes in anticipation for increased demand.

“As people will unfortunately fall ill, they won’t know if it’s flu or if it’s COVID-19,” Elliott said during the daily briefing on Tuesday.

“Then they will be going to the assessment centres and so we know we need to increase the volumes.”

Elliott said the province has a strategy in place to get the numbers up and will be moving forward with it.

The towns of Kingsville and Leamington are joining the rest of the province in Phase 2 of the government’s reopening plan.

Ford announced Monday that the communities, which were the final two towns in Stage 1 of the process, would move up as of 12:01 a.m.

Doug Ford says COVID-19 outbreaks in Leamington and Kingsville have been contained, and the regions may enter the next phase of reopening. 1:16

Ford said COVID-19 outbreaks on local farms are under control and community spread of the virus is low.

Most of the Windsor-Essex region, except for those two towns, moved to the second stage of reopening on June 25.

The government dispatched a team from Emergency Management Ontario to the region last week to help co-ordinate health care and housing for hundreds of agri-food workers who have tested positive for the virus.

Ford said Monday he will be visiting the region soon, and thanked people in Kingsville and Leamington for their patience in recent weeks.