A Shoppers Drug Mart pharmacist in Toronto has quit his job to protest symptomatic COVID-19 testing in pharmacies, saying he repeatedly told the company he was not comfortable with the plan but was instructed to do the tests anyway.

Michael Miranda first became aware of the plan to swab symptomatic people, and those suspected of infection due to close contact with a case, in early November and was immediately concerned it presented a risk to everyone inside his store.

“It should be the opinion of the individual pharmacy whether they are equipped to do this testing,” Miranda told CP24. “I believe there are circumstances where pharmacists can do symptomatic testing,” he said, referring to proper procedures for PPE and doing the swabs outdoors.

“But this will cause more cases than it will find.”

He says he and his boss, who owns the franchise, repeatedly relayed concerns about symptomatic people walking through the store on the way to their counselling room for a swab.

They also expressed concerns about ventilation, use of respirator masks and sharing the same confined space to do COVID-19 vaccinations as well as symptomatic testing.

They were told to continue preparing for testing anyways.

Symptomatic tests are supposed to be conducted by appointment only, but Miranda said that hasn’t stopped sick people casually from walking into the store and asking for a test without an appointment.

“I have had conversations face to face with people saying ‘I have COVID symptoms, please test me,’ and they have coughed on me,” Miranda said. 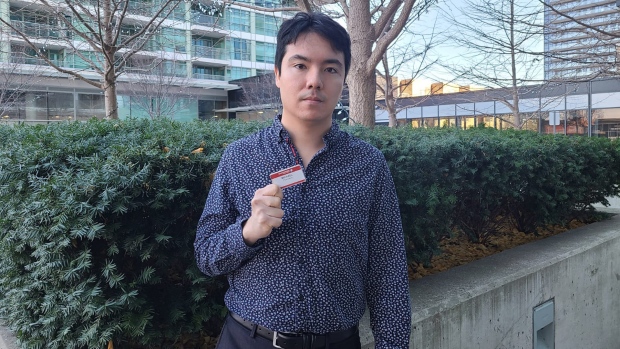 Up until mid-November, pharmacies were only allowed to swab people without symptoms, for purposes of travel, or to conduct asymptomatic surveillance testing on a select number of vulnerable groups.

That changed Nov. 18 when the province announced a plan to expand its testing program from assessment centres into neighbourhood pharmacies.

A training document from Shoppers Drug Mart obtained by CP24 at the time states that pharmacists conducting symptomatic testing were required to participate in a “live training session” for symptomatic specimen collection.

“At least one pharmacy team member from each team must either attend the session or view the recording as soon as possible,” the training manual said.

“They have no plans for in-person PPE training,” Miranda said. “Nobody has gotten any in-person training.”

Asked about whether individual stores and pharmacists are forced to conduct symptomatic testing, a spokesperson for Loblaws, which owns Shoppers Drug Mart, said that is not the case.

“As we’ve said all along, our stores are independently owned and operated, and as such have the final decision on providing symptomatic testing for patients. If the store owner does not want to participate, or does not believe they can do it safely, they don’t have to.”

But Miranda says that when he and the store owner raised concerns, two representatives from the company came to visit the location and convince them otherwise.

Safety concerns and contradictions have presented themselves throughout the rollout of the symptomatic COVID-19 testing program.

Chief Medical Officer of Health Dr. Kieran Moore suggested testing only be done at pharmacies equipped with a separate entrance for symptomatic people to use– but that is not required by the province.

The guidance document prepared by the province for pharmacies says use of respirator masks, considered the gold standard of protection for healthcare workers battling what is now considered to be an airborne virus, is also “not required.”

Documents obtained by CP24 show that Shoppers Drug Mart will allow testing outdoors, something epidemiologists said would greatly reduce risk, but Miranda said there are numerous operational issues that would prevent most pharmacies from swabbing patients outside.

Miranda said he chose to publicize his resignation to put pressure on Shoppers Drug Mart and the Ministry of Health to reconsider the program, which now involves 585 pharmacies across Ontario.

“There is a reason we don’t put vaccination clinics in assessment centres, and Shoppers is trying to do both,” he said.

He said the arrival of the Omicron variant, and its increased transmissibility, is cause for the government to cancel the programand urged Ontarians not to visit pharmacies conducting symptomatic testing.

“If you see (the symptomatic testing) sign at a pharmacy, that is a do not enter sign,” he said.

Asked if symptomatic COVID-19 testing in pharmacies was safe for the coming Omicron coronavirus wave, Ontario’s Ministry of Health said Tuesday they saw no problem in continuing.

“Based on our experience so far, there is no evidence suggesting that it poses any risk to the public or staff. In fact this model is used widely in other jurisdictions,” Ministry spokesperson W.D. Lighthall told CP24. “Pharmacies must choose to opt-in to this voluntary program and per the ministry’s guidance to pharmacies, participating pharmacies are expected to implement and follow infection prevention and control measures to protect staff, patients and customers against COVID-19.”