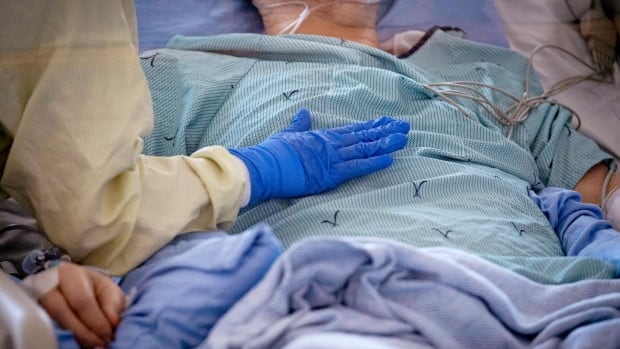 Ontario reported 1,824 more cases of COVID-19 on Thursday and reached a key threshold when it comes to the number of patients in intensive care earlier than expected.

As of Thursday, 203 patients with the illness are currently being treated in intensive care, according to a report by Critical Care Services Ontario.

The number of patients in intensive care is notable because public health officials have said that 150 is the threshold for when unrelated schedules and procedures may be postponed or cancelled to accommodate the influx of COVID-19 patients.

Models detailed by health officials on Nov. 26 forecasted that the number of COVID-19 patients in ICUs would not break 200 before next week, putting the province five days ahead of those projected scenarios.

“It is concerning that we are ahead of schedule,” said Dr. Michael Warner, medical director of critfical care at Michael Garron Hospital in the east end of Toronto.

While some hospitals throughout Ontario have been largely unaffected by the second wave of COVID-19, those in hotspots are under increasing pressure, he added. According to Warner, 18 per cent of all ICU patients in Toronto hospitals have COVID-19. That figure rises to 24 per cent in both York and Halton regions.

Furthermore, the Grand River Hospital in Waterloo Region paused elective surgeries this week after its intensive care unit reached capacity. And in Windsor-Essex, the Windsor Regional Hospital said high patient numbers were challenging the entire regional health-care system and had made it necessary to impose strict visitor restrictions in an effort to reduce transmission of the virus.

Total admissions to intensive care during the first wave of the illness in the spring topped out at 270, Warner said, but hospitals were able to better cope because non-COVID-19 related procedures and care were cancelled.

This time, he explained, that is not an option.

“There would be too much collateral damage,” Warner told CBC Toronto.

Similarly, the Ontario Hospital Association has urged the public to continue following public health guidelines in an effort to address capacity issues.

“Ontario hospitals are finding it increasingly difficult to maintain access to vital surgeries and procedures with COVID-19 cases rising,” the organization said in a statement posted on social media.

“Hospitals are doing everything they can, but they need your support. Help stop the spread by making better practical choices every day.”

New cases reported today include 592 in Peel Region, 396 in Toronto and 187 in York Region. The Middlesex-London public health unit also recorded 127 additional cases, though the provincial health ministry said that, due to a processing error, that figure includes three days worth of case data.

Also included in today’s new cases are 122 that are school-related: 94 students and 28 staff members. Some 755 of Ontario’s 4,828 publicly-funded schools, or about 15.6 per cent, currently have at least one case of COVID-19, while five schools are currently closed because of the illness.

The additional infections push the seven-day average of new daily cases to a record high 1,769.

At Thursday afternoon’s provincial news conference, Premier Doug Ford said the federal government has told the provinces that the first supply of vaccines will be approved and available in early 2021.

“Initial supply will be very limited,” Ford said, adding that he still has many questions — specifically which vaccines will be coming to Ontario, how many, and when they will land.

“These are three fundamental questions that I’ve been asking for several weeks now. They remain unanswered,” Ford said.

Alberta Premier Jason Kenney, meanwhile, said Wednesday: “We’ve been assured by the federal government that shipments will begin to arrive by Jan. 4.”

Kenney said the province will have plans and its distribution network ready to go for when vaccines become available. Ford would not offer any details on Ontario’s vaccination plan when pressed by reporters Thursday.

“What I can guarantee the people of Ontario is we will be ready,” he said.

Ontario’s network of labs processed 52,873 test samples and reported a test positivity rate of 4.4 per cent. Another 58,320 tests were added to the queue to be completed.

The province reported 14 further deaths of people with COVID-19, raising the official toll to 3,712.

There are currently outbreaks in 116 long-term care homes on Ontario, including at Sunnycrest Nursing Home in Whitby, where 111 of the 136 residents and 30 staff members have tested positive.

Meanwhile at a school in one of Toronto’s hardest-hit neighbourhoods, a group of teachers is refusing to work.

Three out of 30 staff members at Thorncliffe Park Public School have “begun the work refusal process and are not inside the school,” Toronto District School Board spokesperson Brad Ross said.

“In the meantime, their classes are covered by other non-core staff in the school and we are working with the Ministry of Labour and the specific staff to address concerns.”

Earlier this week, 18 students and one staff member tested positive for the novel coronavirus through an asymptomatic testing pilot project.

Some 270 students and 17 staff are self-isolating but the school remains open.