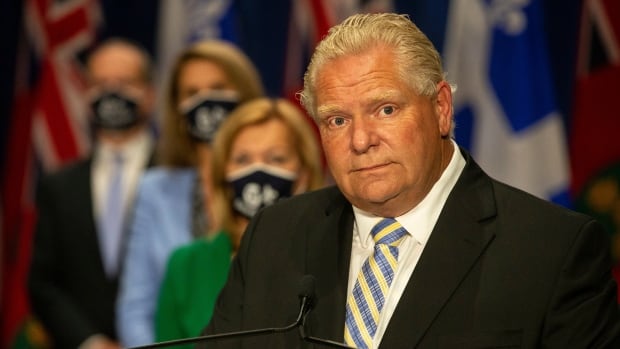 It is also the second day in a row the province is seeing record-breaking daily figures, trumping Thursday’s previous record of 797 set Thursday.

Friday’s update has prompted Premier Doug Ford’s cabinet to hold an emergency meeting to consider tighter measures to try to contain the spread of the coronavirus, which is scheduled for 11 a.m. ET.

This would be consistent with modelling from epidemiologists who forecast last month that Ontario’s second wave of the pandemic was accelerating at a pace that put the province on track to hit 1,000 new cases per day by mid-October.

Toronto, Peel, and Ottawa continue to account for the majority of the province’s daily figures, with 336, 150, and 126 cases respectively, Minister of Health Christine Elliott said in a series of tweets.

An additional 724 cases of the virus are now considered resolved, Elliott confirmed in the tweet.

Friday’s update brings the province’s total to 57,681 cases of the virus since the outbreak began in late January.

The government’s pandemic advisers will recommend cabinet put Ontario’s COVID-19 hot spots under a modified version of the province’s Stage 2 restrictions, according to the sources.

The measures being recommended to cabinet Friday include the closure of:

Cabinet is also being urged to put capacity limits on real estate open houses and guided tours and to shutter interactive exhibits at tourist attractions, such as museums where there is a high risk of transmission of the virus. Team sports would be limited to training activities, with no games or scrimmages permitted.

The recommended closures do not extend to schools, child-care centres, colleges, universities or courtrooms.

Two additional sources said the recommendation is to apply the stricter measures to Toronto, Peel Region and Ottawa. The nation’s capital has seen a sharp rise in new COVID-19 cases over recent weeks, along with outbreaks and deaths in long-term care homes.

“The status quo is not acceptable,” he said on Metro Morning on Friday. “We really need to get into a new regime.”

For Stage 2 of Ontario’s reopening plan, which was in place during May and June, bars and restaurants were banned from seating customers indoors, cinemas and gyms were closed and schools remained shut.

Dr. David Williams, the province’s chief medical officer of health, indicated during a news conference Thursday afternoon that he has recommended tighter restrictions to cabinet but declined to offer any specifics.

Toronto’s medical officer of health Dr. Eileen de Villa asked the province last week to order a 28-day closure of indoor service at restaurants, as well as indoor fitness and recreation facilities, to try to rein in the spread of COVID-19 in the city.

This all comes with many hospitals in the province filled to capacity and intensive care units in some GTA hospitals reporting few available beds.

The Ontario Hospital Association urged the province on Sept. 28 to put the GTA and Ottawa back to Stage 2, with restriction on indoor dining and bars, places of worship, weddings, gyms, movie theatres and other non-essential businesses.

The province’s COVID-19 testing system is also under strain, with appointments at assessment centres in the hardest-hit areas being snapped up shortly after they become available and some people having to wait days to get tested. The Ministry of Health last week changed the criteria to get a test, limiting eligibility primarily to people with symptoms of COVID-19 or those who’ve been exposed to a confirmed case.

Nearly one-tenth of Ontario’s 4,800 publicly-funded schools have reported cases of COVID-19, and a similar proportion of the 630 long-term care homes in the province are battling outbreaks of the coronavirus.