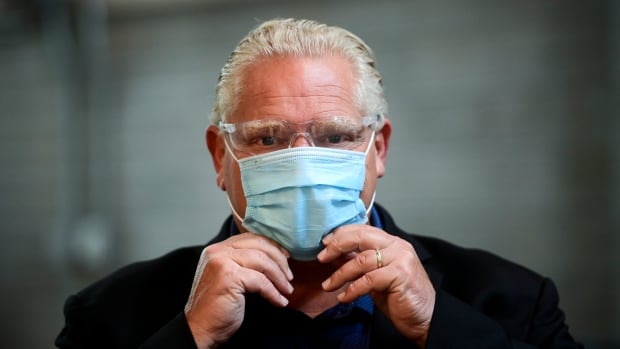 Ontario health officials are holding a news conference at 3 p.m. ET. You can watch it live in the player above.

Ontario is rolling back gathering limits in some areas of the province, and also implementing new fines for people who host and attend large gatherings during the pandemic, Premier Doug Ford announced Thursday.

This comes as the province reported 293 new cases of COVID-19. Infections in Ontario have been on an upswing since mid-August.

Ford said that the new gathering limits don’t apply to those areas, as well as to schools, because they have “really strict protocols in place.”

“We’re comparing apples and oranges here,” Ford said. Instead, the new measures are meant to discourage things like parties.

People at any gathering must also maintain distancing measures with people outside their social bubble, Ford noted.

“This is to send a message to the reckless, careless people who want to hold these parties,” he said.

The premier said the province is also instituting a minimum fine of $10,000 for the organizers of illegal social gatherings, as well as a $750 fine for people who show up to them.

“We will throw the book at you if you break the rules,” Ford said.

“They must be a few fries short of a happy meal, these people.”

Most cases found in people under 40

According to provincial data, there were 35,134 tests completed Wednesday in Ontario, which is the most since the end of July. There is also a backlog of 37,624 tests currently under investigation.

In a tweet, Health Minister Christine Elliott said 85 new cases were found in Toronto, with 63 discovered in Peel and 39 in Ottawa.

Elliott said that 70 per cent of the new cases were found in people under 40.

“With a slight increase in hospitalizations to 53, ICU admissions and vented patients remain stable,” Elliott said.

Twenty-one patients are currently in intensive care, with 12 on a ventilator.

The province also counted an additional three deaths Thursday, bringing Ontario’s total to 2,825. A CBC analysis of local public health units, which is more up to date than the provincial figures, had the real total at 2,864 deaths as of Wednesday evening.

The province also marked 179 cases as resolved on Thursday.

A CBC analysis shows that Ontario’s active cases — the bulk of which have been reported since Sept. 1 — are concentrated in the province’s most densely populated urban areas. Ottawa and the five public health units in the Greater Toronto Area account for 84 per cent of the current cases.

Of the more than 2,300 currently active cases in Ontario:

As cases trend upwards, the Ontario NDP says it plans to force a vote Thursday afternoon in the legislature on a motion to cap class sizes at 15 students.

“Parents are growing increasingly worried about their little ones’ safety,” NDP Leader Andrea Horwath said in a statement.

“COVID-19 cases keep going up, and more new infections are being reported every day among the students and staff who are back in school, with one school already being forced to shut down because of COVID-19 cases.

COVID cases have been reported at multiple schools in the province in recent days, largely clustered in and around the Greater Toronto Area.

“Doug Ford is penny-pinching on the backs of students, jamming kids into full-size classes to avoid having to hire more teachers and education workers,” Horwath said.

“Parents, kids, teachers, education workers, school boards and public health experts recommend smaller class sizes. Today, with the province on the brink of a second wave, I’m calling on the legislature to change course, and finally cap all class sizes at 15.”

Ontario’s Progressive Conservative government has a majority, so for the motion to pass a number of MPPs would have to vote against their own government’s back-to-school plan.