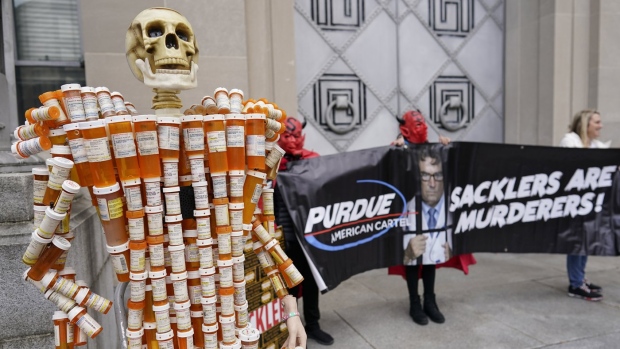 Their advocacy helped send Purdue Pharma into bankruptcy and is forcing the family that has controlled the company for generations to relinquish ownership and provide billions of dollars for communities to combat opioid addiction.

But what victims of opioid abuse and those who have lost loved ones to America’s long battle with addiction have wanted most was a chance to confront members of the Sackler family, who they blame for touching off a crisis that has cost some 500,000 lives over the past two decades.

On Thursday, some of them will finally get their chance.

In a hearing that will be virtual but is certain to be packed with emotion, roughly 20 people whose lives and families have been wracked by opioid abuse will give statements in U.S. Bankruptcy Court with some members of the Sackler family listening. They are likely tell about the pain of losing children after years of trying to get them adequate treatment, about their own journeys through addiction and about caring for babies born into withdrawal and screaming in pain.

The forum is an unconventional hearing for the White Plains, New York, courtroom of Bankruptcy Judge Robert Drain, who on Wednesday gave tentative approval to key elements of a plan to settle thousands of lawsuits against the company.

“No one can possibly underestimate how historic (Thursday’s) session will be,” Arik Preis, a lawyer representing Purdue’s creditors, told the judge Wednesday.

The settlement agreement is estimated to be worth at least US$10 billion over time. It calls for members of the Sackler family to contribute $5.5 billion to $6 billion over 17 years to fight the opioid crisis. That’s an increase of more than $1 billion over a previous version that was rejected by another judge on appeal. Most of the money would be used for efforts to combat the crisis, but $750 million would go directly to victims or their survivors.

The overall settlement, which still requires actions by multiple courts to take effect, provides more than $150 million for Native American tribes and over $100 million for medical monitoring and payments for children born in withdrawal from opioids.

As the settlement was hashed out with a mediator, the terms went beyond money. The plan also calls for family members to give up ownership of the company so it could become a new entity with its profits dedicated to stemming the epidemic. In exchange, Sackler family members would get protection from civil lawsuits over opioids.

The family also agreed not to oppose any efforts to remove the Sackler name from cultural and educational institutions they have supported and to make public a larger cache of company documents.

The mediator, U.S. Bankruptcy Judge Shelley Chapman, also recommended the virtual hearing to be attended by at least two members of the Sackler family.

The hearing is to last two hours. Drain said members of the Sackler family and others will not be given a chance to respond to the statements from the group of victims selected to speak by lawyers for creditors in the case. Some of the victims will address the Sacklers from a law office in New York; others will be at their homes in communities across the U.S.

It has not yet been made public which Sacklers will attend the hearing or which victims will give statements.

The hearing may be the closest thing to a trial for Sackler family members, who victims say helped spark and prolong the epidemic through the marketing of their signature painkiller OxyContin. It’s a crisis that has grown deadlier in recent years, driven largely by deaths from illicit forms of the potent synthetic opioid fentanyl.

It’s not the first time for family members to appear in public venues dedicated to Purdue’s role in the opioid crisis. Two testified before a congressional subcommittee in 2020 and some were part of a virtual Purdue bankruptcy hearing last year.

Sackler family members have expressed regret for the crisis, but they’ve never offered an unequivocal apology. Last week, they released a statement saying in part, “While the families have acted lawfully in all respects, they sincerely regret that OxyContin, a prescription medicine that continues to help people suffering from chronic pain, unexpectedly became part of an opioid crisis that has brought grief and loss to far too many families and communities.”

Purdue Pharma starting selling OxyContin, a pioneering extended-release prescription painkiller, in 1996. At the same time, Purdue and other drug companies were funding efforts to get doctors and other prescribers to think differently about opioids – suggesting they be used for some pain conditions in which the potent drugs were previously considered off-limits.

Over the decades, there were waves of fatal overdoses — first associated with prescription drugs and then, as prescriptions became harder to obtain and some drugs became harder to manipulate for a quick high, from heroin. More recently, fentanyl and similar drugs have become the biggest killer.

Purdue has twice pleaded guilty to criminal charges, but no members of the Sackler family have been charged with crimes. There are no indications that any such charges are forthcoming, although seven U.S. senators last month asked the Department of Justice to consider charges.

Other drugmakers, distributors, marketers and pharmacies involved in the opioid industry have faced similar lawsuits from state and local governments, Native American tribes and other entities.

Last month, drugmaker Johnson & Johnson and wholesalers AmerisourceBergen, Cardinal Health and McKesson announced they were finalizing settlements worth a combined $26 billion. As in the proposed Purdue settlement, most of that money is required to be used to fight the crisis.