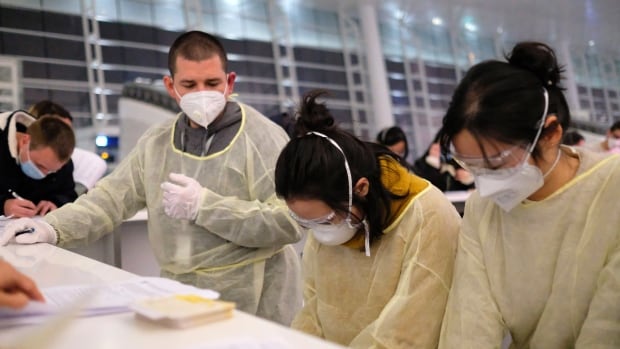 Canada has deployed a specialized unit of emergency response officials to China to co-ordinate the logistics of a planned airlift to repatriate Canadians as the number seeking to leave the region where the novel coronavirus originated continues to increase.

Global Affairs Canada (GAC) said Sunday it has received 325 requests from Canadians who want to leave Hubei, the province that is hardest hit by the recent outbreak of coronavirus.

That’s up from the 196 requests Foreign Affairs Minister François-Philippe Champagne reported on Friday.

The higher number shows the growing desire of many Canadians to get out of the region close to the city of Wuhan, where the number of confirmed cases and the death toll is increasing daily. Many Canadians have expressed concerns about loved ones caught in the lockdown.

Chinese authorities have clamped down on travel in the central cities of Wuhan, Huanggang and Ezhou in an attempt to limit the spread of the virus, turning normally bustling urban centres with populations in the millions into ghost towns.

In a statement late Sunday, the PMO said the government has chartered a plane that will fly to Wuhan once it receives the necessary authorization from China’s government.

The plane will take passengers to the Canadian Forces Base in Trenton, Ont., where they will undergo health screenings and “a period of observation” in order to prevent the virus from spreading.

Unclear when plane will take off

China reported 17,205 confirmed cases of coronaviruses as of late Sunday, with the death toll there rising to 361. The world also saw its first case of a person dying from the virus outside China — a 44-year-old man in the Philippines.

In Canada, there are four confirmed cases. Three are in Ontario and the fourth in B.C.

Global Affairs said officials from the Standing Rapid Deployment Team are on the ground in Hubei to help co-ordinate the arrival and departure of the evacuation flight, but did not say when the plane will take off from Canada or when it will land in China, even as several other countries, including the U.S., Japan, Germany, France and Turkey, successfully completed airlifts of their own citizens out of the region.

Just today, a French-chartered plane carrying 300 people took off from Wuhan and landed at a military base in the southern France. It was carrying citizens from France, Belgium, the Netherlands, Denmark, Czech, Slovakia, and some citizens of African countries, the Associated Press reported.

Nearly 200 Americans have already been evacuated from Wuhan, and U.S. health officials ordered that they be quarantined for two weeks. It was the first time a federal quarantine has been ordered in that country since the 1960s, when one was enacted over concern about the potential spread of smallpox, the Centers for Disease Control and Prevention said.

Arrival protocols to be determined

Global Affairs said space on the evacuation flight to Canada will be limited and not guaranteed, and seats could be confirmed with little notice. Canadians in Hubei who want to get on the flight need to contact the Emergency Watch and Response Centre in Ottawa to make arrangements.

The statement said Ottawa has been informed that only Canadian citizens who have entered China with a Canadian passport will be allowed to board the plane. Canadians with relatives who are Chinese nationals will have to decide whether to leave without some family members.

The department noted that only those with a valid Canadian passport would be allowed to board.

It’s unclear what kind of plane the government has chartered, and if there are even enough seats available for all the people who have requested an airlift.

“We try to keep families together whenever possible, and we have raised this with the government of China,” the statement said.

Canadians who have symptoms will not be allowed to board the aircraft.

Canada’s Chief Public Health Officer Theresa Tam said earlier this week that China has diagnostic tools to determine if someone is infected. Because the incubation period is anywhere from one to 14 days, she said there are “meticulous” measures in place to isolate individuals from other passengers if they develop symptoms during the flight.

Montrealer Megan Millward worries her family of four may not be able to leave China’s Hubei province together 4:40