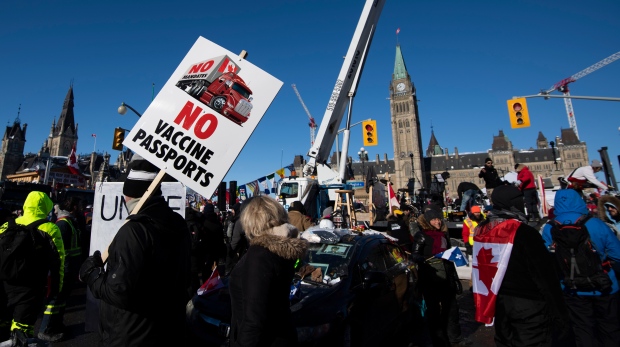 Hospital staff in Ottawa are grappling with commuting delays and some patients worry about access to care as the so-called ‘Freedom Convoy’ protest stretches into another week and the city faces a state of emergency.

Hopital Montfort and The Ottawa Hospital campuses, which have been providing regular traffic updates on Twitter, have had to deal with challenges despite being located away from the city’s downtown core.

Some staff members at Montfort, who would normally have to cross one of the bridges that connect Ottawa to Quebec, ended up staying in hotel rooms provided by the hospital this past weekend amid concerns over traffic, according to a hospital spokesperson. However, the situation was slightly better compared to early last week.

“Monday and Tuesday of last week were really, really bad for our staff members trying to come and work, with very long delays,” Genevieve Picard told CTVNews.ca by phone on Monday, adding that patients have also voiced their concerns.

“We’ve heard messages from, for example, pregnant women who are about to give birth and who are nervous they will not be able to come to the hospital. And we also know we have less people showing up to the emergency. So these are concerning.”

In a follow up email, Picard added that noticeably fewer people were coming into the emergency department specifically during the past two weekends and said the hospital was looking into the change to better understand what kind of patients did not show up.

The hospital was also concerned for patients who will be discharged and live in the affected areas, Picard said.

“We’re concerned for their transportation… We’re making arrangements with social workers or other community services to help them while they are getting better at home, but access is a big challenge.”

Last week, Montfort issued a statement reminding the public they were still open and urged those in need of emergency care to not wait and visit the nearest hospital.

Montfort noted at the time that the commuting delays caused by the protests were also a concern for patients with appointments for tests and procedures, the 45 percent of staff who live in Quebec, and those who had to stay late at the end of their shift for others who were delayed.

Meanwhile, The Ottawa Hospital (TOH), which includes the Civic and General campuses, told CTVNews.ca in an emailed statement on Monday that it was working closely with the city, police and other regional health-care partners to mitigate any impact on patient care.

“The Ottawa Hospital has felt the impact of the protest in downtown Ottawa,” the statement read.

“We will continue working with our partners to ensure that staff and physicians are able to get to work on time, that emergency vehicles can reach the communities they serve, and that patients continue to have access to the care they need.”

The Bruyere Hospital in downtown Ottawa could not be immediately reached for comment.

These challenges come on top of the chronic stress, exhaustion, and burnout many medical workers are already coping with nearly two years into the COVID-19 pandemic and most recently after the Omicron wave.

Public health authorities say the latest wave has likely peaked, but some medical professionals caution that numbers could rise again once protocols are loosened. Experts say it is too soon to tell whether the convoy – which has seen protesters gather in large crowds without physical distancing or masks – will impact community spread or hospitalizations. The number of patients testing positive for COVID-19 at Montfort are now half of where they were two to three weeks ago, Picard said.

Ottawa Public Health told CTVNews.ca via email that it would continue to monitor activity in the community “as restrictions start to lift and the situation evolves in the coming days and weeks.”

“Ottawa Public Health continues to focus on increasing vaccine coverage rates in our community and reducing barriers to access vaccines,” a spokesperson said.

“In addition to the importance of vaccination, it is important that people continue to practice physical distancing, wear well-fitted masks and stay home if you are sick.”