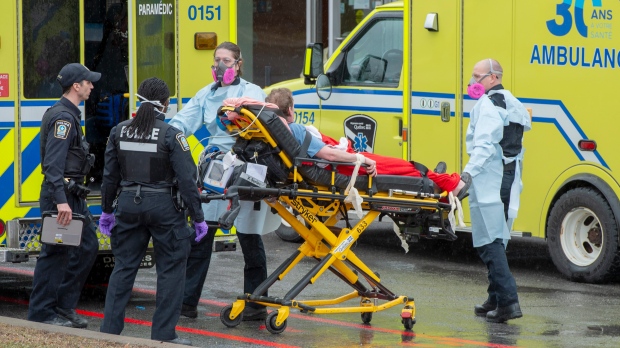 TORONTO — As governments attempt to address the dwindling stock of masks, tests and ventilators needed during the COVID-19 pandemic, a national group of physicians is warning of another supply threat.

Painkillers and sedatives are potentially weeks away from a “critical shortage,” the Canadian Association of Emergency Physicians (CAEP) said in a news release Tuesday.

“This would have significant clinical impact and therefore requires immediate investigation and action,” the group said.

While the issue of ventilator access has been particularly dire, the group said, some attention needs to be paid to the supply of the medications required to operate the ventilators.

There has been no documented shortage in Canada yet, said Dr. Alan Drummond, co-chair of public affairs for the CAEP in an interview with CTVNews.ca. But the group is calling for hospitals and governments to determine the state of the supply of the drugs in question, which include sedatives (propofol), benzos (midazolam), painkillers (fentanyl and morphine) and paralytic agents (succinylcholine and rocuronium). The drugs are used every day in emergency departments, intensive care units and operating rooms.

“If there is (a shortage), or there’s a potential shortage in the offing, then let us know,” Drummond said Tuesday via telephone. “Under those circumstances, we could do our bit in terms of modifying the medications and techniques we use in the emergency department.”

The new call comes after weeks of following developments in other countries, hearing anecdotal evidence from various CAEP members around the country, and following official provincial action. In Quebec, Premiere Francois Legault has stated that the province anticipates a shortage of anesthetic medications, while in Ontario, Drummond said hospitals have been asked to complete inventories, though there has yet to be any official word on stock levels.

“That indicates that A) they don’t know, and B) they may well be concerned. We’re just trying to get ahead of the curve here,” said Drummond, adding that there have been notable shortages of the drugs in the U.S. and Europe. “Since this is a complex global phenomenon, I wouldn’t be surprised if there were potential shortages in Canada.”

A shortage could have devastating consequences for patients who can’t control their breathing, some of whom may even develop delirium on top of the painful, anxiety-inducing process of ventilation. Not only may an increasing number of coronavirus-infected patients require these drugs, but they’ll likely need more of them, said the CAEP.

“COVID patients appear to require the support of a ventilator for longer times than other ICU patients and, as such, require more of these essential drugs,” the news release said.

The CAEP is calling on authorities to develop processes as the local level to inform physicians of stock levels and possible drug alternatives, including older medications. The group wants a “national review” of the supply, distribution and management of the drugs across provinces, as well as “national management” of procurement, production and distribution of the drugs.

At the clinical level, emergency physicians should reduce drug waste and use alternative techniques and painkiller options if appropriate, the group continued. Drummond said that physicians are “well-schooled” in the medications potentially at risk, so the pandemic may require a cognitive shift for doctors.

“It’s always good to choose wisely the medications and techniques used. It may mean a greater focus on the use of regional nerve blocks, of joint injections, of using drugs like ketamine, which is kind of a third-world disaster-type medicine for sedations,” he said.

“We just have to readjust our thinking a little bit to say ‘These drugs would be ideal, but we can use less-than-ideal drugs if necessary to get the job done to provide pain relief and compassionate care.’”

So concerned about anecdotal reports of medication shortages required to ventilate patients @CAEP_Docs has released a statement on their rational (or is that rationed) use.

Everybody has a role to play in conserving these vital medications, including emergency physicians.