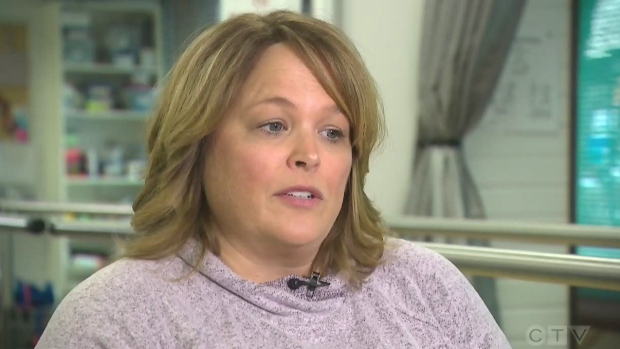 TORONTO — An Ontario woman who received an experimental spinal stimulator implant in the U.S. says the device should be tested in Canada.

Sandra Mulder, who was one of the first Canadians to receive the implant, was left partially paralyzed after a motorcycle accident in 2012. She had minimal motor function in her legs, couldn’t sit on the side of a bed for long, and couldn’t reach down to touch her toes without falling over.

But the new implant has changed her life.

“It makes me feel better overall,” said Mulder. “I always have it on at some level. I find that it’s given me a better quality of life.”

Mulder received the implant in 2017, as part of a study in Minnesota. The device uses 16 electrodes to send signals to nerves in her lower spine. She can even control the settings using a smartphone app, picking different “programs” to send varying electrical signals to her spine. The signals provide her with some control over muscles in the paralyzed part of her body.

The device is similar to the epidural stimulator that Humboldt Broncos player Ryan Straschnitzki paid to have implanted in Thailand, a move that he told the Canadian Press emphasizes a gap in Canada, where the devices have not yet been approved for use.

“Our health-care system is kind of lacking in this area for spinal cord injuries and I think it’s huge that Thailand and some other places are getting this started,” he said earlier this month. “I think if Canada can step in and advance this program, I think it’ll help a lot of people out.”

Mulder got her implant, free of charge, as part of a study in Minneapolis led by Calgary surgeon Aaron Phillips of the Libin Cardiovascular Institute of Alberta and the University of Calgary. He told CTV National News that early results show the device is safe. Among three Canadian and 11 U.S. patients with implants, the device has shown to improve bladder, bowel and body temperature control. Some patients have even been able to move their legs for the first time.

“I would say that it’s the only therapy in that last kind of 50 years of trials that’s shown such significant promise for people with spinal cord injury,” said Phillips. “I’m excited because I’m seeing people have life-changing experiences … and recovery of function that they didn’t expect to have.”

Phillips and colleagues in Vancouver are “aggressively working through the regulatory steps” to attain funding for a possible study in Canada. He told CTV National News that there is “significant institutional support,” including from the University of Calgary. The study would be the first of its kind in Canada.

Mulder, who has lived with the implant for just over two years now, believes the technology could be life-changing for many Canadians.

“We have to allow it in Canada,” she said, adding that Canadians shouldn’t have to travel to other countries for the device.

“I can’t say it’s miraculous. But she can stand longer, she can reach behind her, which sounds small, but is a huge gain,” said Jackie Levy, who considers the technology promising. “I think it’s the most hopeful thing we have seen in quite a long time.”