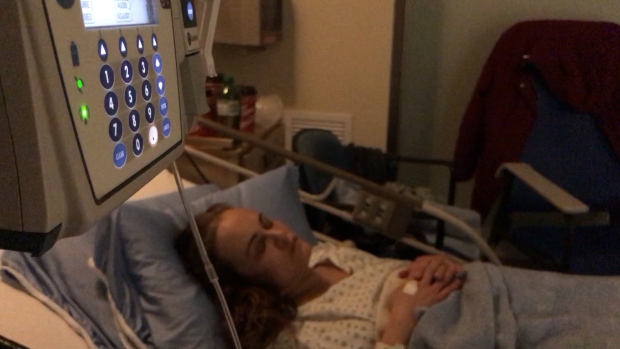 NEW WESTMINSTER, B.C. — A B.C. woman waiting for life-saving surgery claims she’s been abused at the hands of a nurse.

Beatrice Sallis suffered a ruptured brain aneurysm two days before Christmas. She was admitted to Royal Columbian Hospital in New Westminster, and since then, alleges she’s had some questionable interactions with one particular nurse.

She felt compelled to record one of their conversations, she says, which was prompted when she noticed one of the room lights was on.

Sallis told CTV News she’s supposed to limit stimulation and light due to her aneurysm.

In the audio recording, she can be heard telling a person she says is a nurse, “That light isn’t what I’m supposed to have. It really hurts my eyes. Could you let me know when you’re turning it on next time, please?”

“If I remember. If I forget, oh well,” another woman, identified by Sallis as the nurse, responds.

“Is that how you treat patients?” Sallis asks.

The nurse then tells Sallis she can report her to a manager and tell her family. Seconds later, Sallis claims, the situation escalated.

“You just pulled my catheter. Don’t grab me like that,” Sallis says.

“And you act up for attention and you probably have been doing it your whole life,” the nurse says in the recording.

“Really? So you’re a psychologist now?”

“Get real,” the nurse responds.

Sallis says she shared the recording with the nurses in charge, but was disappointed by their response.

“The charge nurse said, ‘Don’t worry. We’ll make sure that she won’t be your nurse tonight. We’ll have her work with another patient,'” Sallis said.

“And there’s this pause, and I said, ‘I think you’re failing to note that she shouldn’t be taking care of anyone until this is reviewed.”

In an email statement, spokesperson Tasleem Juma said FHA was disappointed by the recording, and that officials have spoken to the nurse in question.

“Nursing is a caring profession and every day our nurses go above and beyond to deliver high quality care. This is why this is very disturbing and not reflective of the type of care we expect. We are looking into this further,” Juma said.

“We are very sorry this patient has had this experience, and have already reached out to them.”

Sallis said she hopes sharing the recording will prevent it from happening to anyone else.

“What about people that aren’t assertive enough? Or people (who) aren’t capable of even speaking up?”

In the meantime, she is waiting for surgery and after that, she hopes to return home soon.