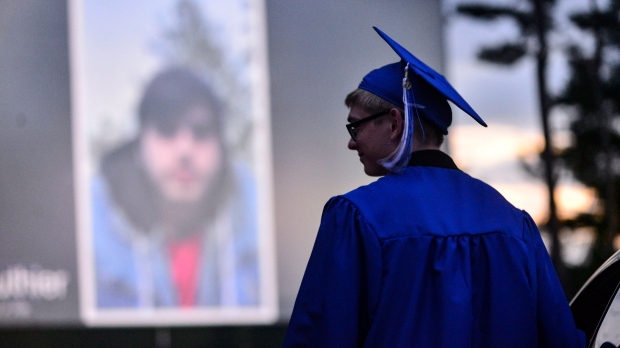 TORONTO — With limits on public gathering sizes still in place across the country, students hoping to graduate this year won’t be marking the occasion with a traditional ceremony.

Many schools are considering hosting virtual celebrations or postponing the event until it’s safe for parents, students and teachers to meet face-to-face again.

However, the Canadian Paediatric Society (CPS) is calling for support from provincial governments in allowing in-person ceremonies and instructions on how to safely facilitate them, especially in Ontario.

“We’d like to see [ministries of education] take a positive, facilitative attitude toward recognizing that kids need these ceremonies,” Daphne Korczak told CTVNews.ca over the phone on Wednesday. Korczak is a psychiatrist and chair of the pediatric society’s mental health task force.

“Within provincial guidelines, there’s a lot of room for creativity and flexibility.”

Students transitioning between different schools or learning environments are especially vulnerable to feelings of anxiety and social isolation, she explained. The idea of not being able to visit their new school or potential teachers makes it more difficult to know what to expect in the future.

It also makes it harder to move on, she says.

“They’re torn. On the one hand they’re supposed to be looking forward [and] on the other hand, they’re still grieving the losses of this year,” she said. “Graduations ceremonies can be really helpful in giving kids the opportunity for closure and to prepare them psychologically for their new identity.”

Jennifer Vriend, a psychologist based in Ottawa, explained that with the ongoing pandemic, a number of her patients are experiencing this sense of grief, including those expecting to graduate.

“A lot of us are grieving for things that we have lost [such as] the way that we used to live, the connections we used to have,” she told CTVNews.ca on Wednesday via telephone. “For a lot of the kids in school, it’s those memories that they were planning on having, like prom or graduation.

“Now they’re going to be missing out on those experiences.”

She said it’s important for students to not only accept that it’s a challenging time, but to also be able to celebrate how far they’ve come. Hosting a graduation ceremony is the perfect way to do this, she added.

“It forces some of that reflection, hopefully in a positive way, about all of the things that you’ve gone through,” she said. “It is really important to remind yourself that it was a difficult year but you got through it, and have lots of big things ahead of you.”

According to Korczak, having a graduation ceremony can even go as far as affecting a student’s ability to succeed.

The recognition and sense of accomplishment that normally comes with such an occasion acts as motivation, she explained. It encourages students to be excited and engage positively with their new environment.

“If they’re about to embark on a new journey, a new phase of their life…it’s tougher to do that when you haven’t experienced the reward that comes from graduation,” she said. “Setting them up for success when we know that there are going to be challenges yet to face is really important.”

While Vriend said that having a virtual ceremony is still better than nothing, it doesn’t compare to hosting one in-person.

“The in-person [contact] is a basic human need and function,” she said. “The virtual doesn’t affect us as strongly, there’s something missing.”

WHAT SCHOOLS ARE DOING

Korczak points to action taken in other provinces as good examples of formally recognizing the importance of these ceremonies by easing restrictions.

Nova Scotia’s Chief Medical Officer of Health Dr. Robert Strang has said that exceptions will be made within the province to allow for drive-in graduation ceremonies under strict conditions.

Earlier this month, Quebec’s public health department also announced it would allow elementary and high school students to attend school for one last day to take graduation photos and get their yearbooks signed. This is despite the province having the highest number of COVID-19 cases in Canada. With a total of 53,341 cases, nearly 55 per cent of the country’s cases have been reported in Quebec.

While ceremonies must continue to respect public health guidelines, such as physical distancing and hand washing, this support from the government allows students one final chance to say goodbye. Due to the COVID-19 pandemic, high school and elementary school classes across the province have been cancelled for the rest of the school year.

Other provinces have made similar announcements. New Brunswick, for example, has announced it will allow in-person graduation ceremonies for high school students. Individual schools, however, must come up with plans to ensure the safety of those attending.

Provinces such as Ontario, however, have not taken similar measures. Schools across the province are expected to remain closed until at least September due to the pandemic. With regards to graduation ceremonies, Education Minister Stephen Lecce has urged schools to postpone these events until it is safe to host them again.

Ryan Bird, spokesperson for the Toronto District School Board, explained that the decision of how and when to organize graduation ceremonies for students in its elementary and high schools is being left to schools themselves.

“Because there are so many different experiences among staff and students and the challenges they face, we’ve left this up to individual schools to decide what works best for them,” he told CTVNews.ca over the phone on Wednesday. “There may be instances where schools can mark those events in a creative way, but we’re not, as a system, mandating that every school do an in-person event.”

Official graduation ceremonies have been delayed until the fall or whenever limits on gathering sizes are lifted and it is safe to meet again. At that point, Bird said, the board would have to reassess its plans based on what provincial public health officials are recommending.

“Right now, we have guidance that there should not be gatherings of more than five people,” he said. “We just don’t want to take that risk based on public health advice at this time.”

Meanwhile in Calgary, the city’s largest school board is taking a unique approach to giving students a sense of closure while still meeting physical distancing requirements.

All in-person classes in schools across Alberta were closed in mid-March due to the pandemic. The province of Alberta has since released public health guidelines for holding either drive-in graduation ceremonies or those performed virtually. Facilities where graduation ceremonies are normally held, such as auditoriums, continue to be restricted.

Some schools enrolled under the Calgary Board of Education will be providing students with “grad in a bag,” explained Calvin Davies, the board’s director of education. Come the end of the school year, students will be able to pick up a “bag” – or a box or tote bag – filled with mementos.

These will include their graduation certificate, letters from faculty and board members, even a cap and tassel. Students will be able to pick up these bags at staggered times.

“It’s something for them to have that’s physical and tangible, to take with them,” he told CTVNews.ca on Wednesday via telephone.

On top of this, different schools will post pre-recorded messages from faculty and board members through their own online databases for students to access. These are messages that would have otherwise been delivered as speeches in a traditional graduation ceremony.

“This is truly a unique graduation year and nobody has ever experienced something like this before,” he said. “We want to acknowledge the hard work and effort that our graduates have put in.”

Additionally, Davies said the board is looking at dedicating a half-day to graduation celebrations across all schools once restrictions are loose enough to do so. Indoor gathering restrictions in Alberta are currently limited to just 15 people, and no more than 50 residents are able to gather outdoors.

“Graduating classes at our high schools are significantly larger than [provincial gathering limits] but we have said we will set aside a half-day for those that are able to make it…to have that sense of closure,” he said.

Last month, the province of British Columbia announced that students would be able to return to school on a part-time basis as of June 1.

A ban on gatherings of more than 50 people remains in place across the province.

Certain schools in Surrey, B.C. and the surrounding area will be hosting in-person graduations over several days while others are opting for virtual celebrations, explained Ritinder Matthew, spokesperson for Surrey Schools. This school board is the largest in the province, with about 74,000 students enrolled.

Different parent and student advisory committees, she explained, are directly involved in deciding how individual schools approach their own ceremonies.

Those who have decided to host in-person ceremonies are putting together “micrograduations” – these are much shorter ceremonies with a small number of graduates in attendance. Students will stand spaced out across the stage with at least two metres of distance between them. Two relatives of each student are allowed inside to watch them collect their certificate. Once the ceremony is done, the entire room is wiped down before the next ceremony takes place.

Daniel To, district principal of education services for Surrey Schools, oversees a number of programs for at-risk and vulnerable youth attending schools across the district. He’s been participating in a number of “micrograduation” ceremonies for these students.

With only five to 10 students per ceremony, each one only lasts about 20 minutes, and features all the same aspects of a traditional graduation ceremony, such as speeches and certificates.

For the at-risk and vulnerable youth enrolled in his program, hosting these physical, in-person celebrations holds additional significance.

“Many of our at-risk and vulnerable youth didn’t even think they would graduate…and in many occasions, they’re the first high school graduate in their family,” he told CTVNews.ca over the phone on Wednesday. “Carrying out an in-person graduation ceremony, even though it’s small, even though it doesn’t look the same as it did before, it’s such a confidence-building and life-affirming thing for our youth.

“For some of them, this is the greatest accomplishment they’ve ever made.”

To explains that students are allowed to take their cap, gown and sash home with them, making it easier to take pictures with relatives.

Despite the continued restrictions regarding physical distancing, To said he’s glad he’s able to share such a special moment with students in person.

“Kids crave physical contact and spending time in-person is important for these youth,” he said. “Positive relationships with their teachers and support workers is what keeps these kids coming back to school.”