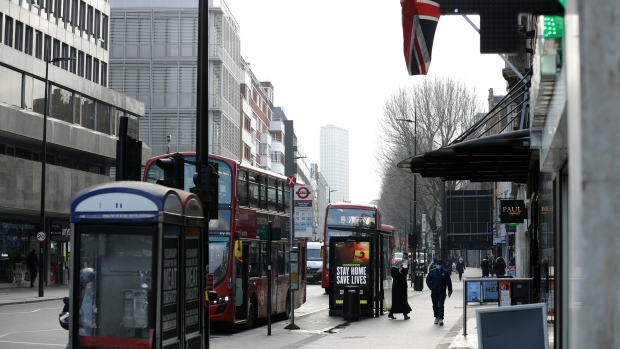 TORONTO — How did the Alpha variant — the first COVID-19 variant of concern to be identified, appearing first in Kent county in southern England— spread across the U.K. so quickly in 2020?

According to the study published Thursday in the journal Science, large numbers of infected individuals carrying the variant from central locations to new parts of the U.K. helped the variant spread as fast and far as it did.

The study, one of the largest phylogeographic analyses ever performed, followed the spread from Kent county to “all but five counties in Wales, Scotland, Northern Ireland and England by 19 January,” a press release specified.

The Alpha variant has also spread internationally, but this study focused on the spread within the U.K.

“At the beginning of December 2020, the epicentre of COVID-19 transmission in England shifted rapidly from the North West and North East to London and the South East, as the Alpha variant took hold,” Dr. Moritz Kraemer, lead author of the study and a research fellow at Oxford University.

“As people travelled from London and the South East to other areas of the U.K. they ‘seeded’ new transmission chains of the variant. This continued as a national ‘super-seeding’ event which did not start to slow until early January.”

Researchers looked at more than 17,000 genomes of the Alpha variant collected by various local health units between the end of September and January 19, 2021 from COVID-19 test samples representing a random selection of the population. They looked at the samples by their location and the week they were collected in order to map the progression of the variant across the U.K.

The study used aggregated phone data in order to examine how human movement helped disseminate the variant. Researchers observed that movement out of Kent and the neighbouring Greater London area increased at the end of the second lockdown, and reached more unique locations as well, contributing to the spread.

Verity Hill, co-author and researcher from the University of Edinburgh, said that after the lockdown was lifted, the variant “spread rapidly across the country, as human movement increased significantly.”

In November, including during the lockdown, the amount of Alpha variant case exports — meaning cases that arose from travel by infected individuals — rose from less than 600 to more than 12,000 by early December, researchers found.

Restrictions increased in London on December 20, including a “stay at home” order, and this coincided with a stabilization of the rising rate of exported Alpha variant cases. The total number of Alpha variant cases didn’t immediately decline because of growth in southeast England that offset the decline in outward travel from London.

It wasn’t until a third national lockdown occurred in early January that case exports began to decline down from around 20,000 weekly exports, researchers observed.

Maps of the spread created using data from the study show numerous lines of transmission branching out of the Greater London area.

A colour-coded map showing when different regions had outbreaks of the Alpha variant also shows that while regions far away from London tended to have outbreaks later on in the study period, several regions in England that had outbreaks early on were not directly next to London, showing how individuals making long trips spread the variant to new regions that were not geographically close to the initial outbreak.

During the study period, the longest dispersal events — meaning how far the variant traveled in one individual to infect others at the destination — consistently originated in the London area, travelling sometimes more than 100 kilometres away to spread further.

Oliver Pybus, a professor at Oxford University and expert in pandemic genomics, explained in the release that the initial wave of Alpha variant from the outbreak in Kent and London to other regions of the country with lower transmission explained how it exploded so suddenly.

“The early estimates [of transmissibility] were higher because we did not know how much its growth was exacerbated by human mobility and by how many contacts different groups of people have,” Pybus said. “Crucially, as more variants emerge and spread in other countries worldwide, we must be careful to account for these phenomena when evaluating the intrinsic transmissibility of new variants.”

The study also notes that their results support the theory that the Alpha variant largely spread through the U.K. from one dominant U.K. source region, as opposed to it having originated in international travel from a location with an undetected epidemic of Alpha variant.

This research indicates that when we think about new variants, the rate of transmissibility is not the only driver, and that human movement plays a huge role in encouraging spread.