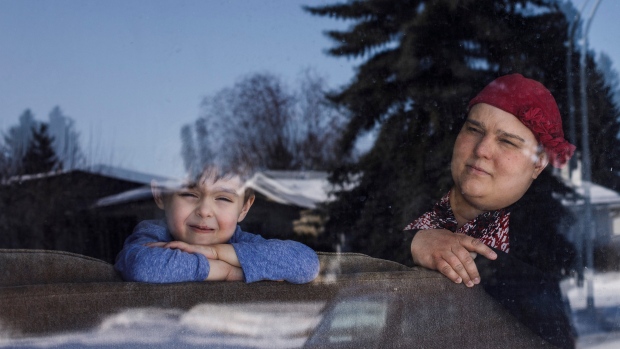 The COVID-19 pandemic has Alyssa Denis questioning just how much her life is worth to Canadian society.

Denis, who has cervical cancer, lupus and respiratory illness, says she got a sobering call from her doctor last week urging her not to come in for an appointment.

The graduate student said her doctor warned her that she was not only at high risk of complications from COVID-19, but if there was a high demand for ventilators, she may not make the cut because of her underlying conditions.

“I’m really scared,” Denis said, choking back tears. “It’s like suddenly I woke up and I’m in a dystopian movie.”

Many Canadians are facing such unfathomable dilemmas, and some say the COVID-19 crisis has left those with the weakest immune systems to fend for themselves.

People with robust immune systems can develop antibodies to fight back against infection and reduce their chances of complications from COVID-19, said Dr. Camille Lemieux, chief of family medicine at University Health Network in Toronto.

Others aren’t so lucky, she said.

While seniors may be most likely to have comorbidities that weaken their immune response to a virus, these conditions can cut across age groups, said Lemieux.

Vulnerable populations include people with autoimmune disorders, cancer patients on chemotherapy and those with underlying lung conditions.

Denis happens to check all three of these boxes. And as she celebrates her 37th birthday in self-isolation this week, her head is swirling with fears about her future.

She was supposed to undergo a radical hysterectomy this month to contain her cancer, but that’s been rescheduled for May, and she expects the procedure will be postponed further.

And then Denis has to figure out how she’ll get the medications, treatments and tests that she needs when she can’t leave the house. She also uses mobility aids, which doesn’t make things any easier.

She’s concerned about how she’ll take care of the basics, such as money, food and personal safety.

Her parents both have conditions that compromise their immune systems, so she has to worry about their health too.

Still, Denis said members of the cancer community have found ways to help each other from within their respective “bubbles.”

Denis said she relies on these “bright shining stars” to guide her during these distressing times when it feels like everyone is solely looking out for themselves.

“Those are the people who are giving people like me hope that maybe our society isn’t completely doomed,” said Denis, who has launched a crowdfund for immunocompromised Canadians in her situation.

Renee Patenaude, who has an autoimmune disorder and history of respiratory illness, has been so consumed in recent weeks with caring for a family member undergoing cancer treatment, she forgot to stock up on toilet paper.

Over the course of two days, Patenaude made 10 different stops around Mississauga, Ont., in search of basic bathroom and cleaning supplies.

Every time she entered a new store, the 49-year-old worried she was exponentially increasing her chances of exposure to the novel coronavirus, when so much as a cold could put her and her relative in jeopardy.

As she scanned the empty shelves, Patenaude’s heart sank as she thought of the stockpilers who were lining their pantries.

“I didn’t have that luxury. And anybody who is going through any health issues, we do not have the funds to spend that much money up front,” said Patenaude.

“They’re being left behind, because they don’t have the means to be able to protect themselves.”

Meghan Villeneuve, a 33-year-old mother of two in Edmonton, was diagnosed with Stage 3 breast cancer in early January, just as the novel coronavirus emerged on the global radar.

Since then, Villeneuve said her vision for her future has been upended twice, and her world has become “smaller and smaller” amid the uncertainty.

And as she tries to protect herself, Villeneuve is also concerned for her family.

Her four-year-old has already had to wrap his head around why mommy lost her hair, and she doesn’t want to burden him further.

Gillian Salmon, a 35-year-old dietitian in Fredericton, knows stress is bad for her multiple sclerosis, but she’s sure been fielding a lot of it lately.

A case of the flu can trigger a flare-up that could potentially leave her disabled, said Salmon, who is on an immunosuppressant for her MS and has asthma.

Since the first COVID-19 case was reported in New Brunswick, Salmon said her anxiety seems to mount with every social interaction.

She’s cancelled her stand-up comedy gigs, dance nights and limited her social circle to her partner and their four cats.

“I want to make a blanket fort and hide in it until all of this blows over.”

But when a close family member experienced a health crisis last weekend, Salmon put her anxieties aside to head to a hospital in Saint John, N.B.

“I feel like I’m putting myself at risk by being here,” Salmon said by phone from a waiting room in the intensive-care unit, where her loved one is recovering from surgery.

“But I would hate myself if something went wrong, and I couldn’t be here for my family.”

Salmon said she’s been dismayed by the “fear mentality” running rampant on social media, or worse, the flippancy among some who have called COVID-19 the “boomer remover.”

“Not all of us who are at risk are boomers, and also, not all boomers are bad,” said Salmon. “That’s a horrible thing to say.

“It’s basically saying you’re not valued and as a human member of this society for us to do anything protective.”

This report by The Canadian Press was first published on March 17, 2020.