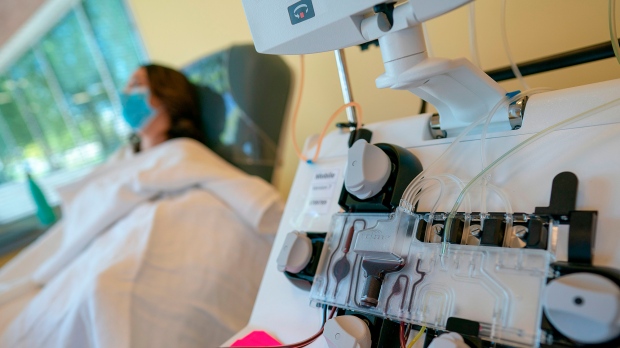 A National Institutes of Health panel said there’s no evidence backing the use of convalescent plasma to treat coronavirus patients and that doctors should not treat it as a standard of care until more study has been done.

“There are insufficient data to recommend either for or against the use of convalescent plasma for the treatment of COVID-19,” the panel of more than three dozen experts said in a statement posted on the NIH website Tuesday.

The statement, which was posted quietly, contradicts the Trump Administration’s characterization of the treatment as “historic” and a “major advance” and directly refers to last week’s emergency use authorization by the U.S. Food and Drug Administration.

“Convalescent plasma should not be considered standard of care for the treatment of patients with COVID-19,” the committee, which evaluates treatments for coronavirus, said in the statement.

“Prospective, well-controlled, adequately powered randomized trials are needed to determine whether convalescent plasma is effective and safe for the treatment of COVID-19. Members of the public and health care providers are encouraged to participate in these prospective clinical trials.”

NIH later released a statement saying the committee’s guidance was not meant as criticism of the FDA’s decision to grant an EUA. “To clarify, the Panel does not contradict the EUA as it does not make a recommendation against the use of convalescent plasma for COVID-19,” the NIH said in the statement, released Wednesday afternoon.

“Today I am pleased to make a truly historic announcement in our battle against the China virus that will save countless lives,” Trump said at a White House news conference. “Today’s action will dramatically increase access to this treatment.”

Health and Human Services Secretary Alex Azar was equally effusive. “This is a major advance in the treatment of patients. A major advance,” he said at last week’s briefing.

But Hahn had also made misleading comments about the data supporting the use of convalescent plasma — which is the antibody-rich serum taken from the blood of people who have recovered from an infection. The hope is infusing this plasma into new patients will kickstart their immune response. It’s a treatment that dates back more than 100 years and has never been used broadly.

The NIH panel, led by Dr. Clifford Lane, the head of research at the National Institute of Allergy and Infectious Diseases; Dr. Roy Gulick, chief of the Division of Infectious Diseases at Weill Medical College of Cornell University; and Dr. Henry Masur, chief of the Critical Care Medicine Department at NIH, said much more research is needed into whether the treatment works. Data published so far don’t really show whether it helps patients, they said.

“The long-term risks of treatment with COVID-19 convalescent plasma and whether its use attenuates the immune response to SARS-CoV-2, making patients more susceptible to reinfection, have not been evaluated,” the statement added.

Plus, different patients have differing levels of antibodies, so the treatment is highly variable, they said.

“Here you have different governmental agencies that are at odds,” Topol told CNN’s John Berman Tuesday.

“When you give pooled plasma, the chance that you will make a difference is very low,” Topol added. “We don’t know if this is going to work.”

Last week, Dr. Janet Woodcock, director of the FDA’s Center for Drug Evaluation and Research, said that doctors have treated so many COVID-19 patients with convalescent plasma, it has been difficult to figure out if the treatment works.

“The problem with convalescent plasma is the great enthusiasm about it,” Woodcock said in an online conversation about the latest science behind monoclonal antibody treatments and convalescent plasma. “It exceeded anyone’s expectation as far as the demand.”

Bioethics expert Art Caplan told CNN last week he did not think the FDA’s EUA was the right move. “EUAs make sense when there’s real, clear evidence of benefit, and there should be evidence about what that evidence is,” Caplan said.

“From what I’ve seen I don’t think there’s enough evidence in hand to do this,” added Caplan, who is the founding head of the Division of Medical Ethics at NYU School of Medicine.