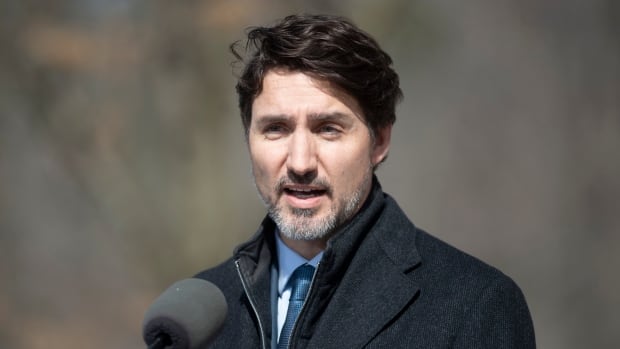 Prime Minister Justin Trudeau says a package of financial supports is on the way to help millions of Canadians and businesses get through the COVID-19 crisis — and he isn’t ruling out an extension to the tax filing deadline.

During a news conference outside his residence at Rideau Cottage, Trudeau urged Canadians to stay home and take follow recommended steps to stop the spread of infection. He said the government is also looking at temporarily recalling Parliament to bring in emergency economic measures.

“Tomorrow we will be making another major announcement on economic actions to support Canadians as quickly as possible. By the end of the week, we will have more to say about changes for the upcoming tax season,” he said.

“We’re looking at giving more flexibility for people to be able to make payments and for businesses to have more liquidity during this time.”

Trudeau also said the government is examining the Emergencies Act to determine if it should be invoked, or if there are other ways for the government to take steps to protect the public.

Prime Minister Justin Trudeau tells Canadians he doesn’t know how long measures to stop the spread of COVID-19 will be in place. 0:39

“We’re going to be flowing income supports to millions of Canadians. We’re going to make sure that we’re able to weather this crisis in the right way,” he said.

Trudeau reminded Canadians that everyone has a responsibility and a role to play in containing the spread of COVID-19, including social distancing measures that include avoiding gatherings of more than 50 people and working from home where possible.

Could take ‘weeks or months’

“We don’t know exactly how long this is going to take, whether it takes weeks or months,” he said.

“But we know that every step of the way, we will be there to support each other.”

Deputy Prime Minister Chrystia Freeland said invoking the Emergencies Act is a “last resort” that would give the federal government extraordinary powers. It would only be invoked in consultation with the provinces and territories, she said.

“We are in a difficult situation,” she said. “As the World Health Organization said this morning during its daily update, this is the defining global health crisis of our time.”

The Emergencies Act allows for extraordinary measures such as travel restrictions or protecting essential goods and supplies.

On Monday, Trudeau announced a series of extraordinary measures to contain the spread of the virus, including barring entry to all travellers who are not Canadians or permanent residents, with the exception of Americans, crew members and diplomats.

As of Tuesday, there were 466 confirmed and presumed cases of COVID-19 in Canada.

Health Minister Patty Hajdu said as the number dramatically increases, officials are urging Canadians to take steps to “flatten the curve” of infection and limit community transmission. She acknowledged while those measures are disruptive and stressful, they are critically necessary at this point in time.

Health Minister Patty Hajdu asks Canadians to think of ways they can help their neighbours get through the Covid-19 crisis together. 0:49

“The flatten the curve message today is really the most important one. The measures that we take today will help us ensure that we can actually reduce the level of community transmission that is happening across the country,” she said.

Hajdu became emotional as she also urged Canadians to be kind and generous with one another during this time of crisis.

“Think of ways you can help to ensure that we get through this together. There are scared people. There are lonely people. There are frightened people. And it doesn’t take a lot to reach out to them and say that you’re there with them, even in spirit, to ask what they might need,” she said.

Hajdu said that assistance could include helping deliver groceries or sharing supplies with those in need.

The prime minister said other financial support measures could be introduced, including:

“These sorts of things are all on the table in terms of tools we’re looking at to help Canadians as quickly as possible get through these times,” Trudeau said.

He did not rule out postponing the April 30 tax filing deadline.

“We’re looking at all sorts of ways of helping Canadians, and this is part of what we’re looking at,” he said. “We’ll have an announcement tomorrow most likely around that.”

Earlier Tuesday, Ontario Premier Doug Ford declared a state of emergency in his province, a move that will shut down most recreational facilities, libraries, bars and restaurants. Grocery stores, pharmacies and public transit will remain open.

Asked if the federal government could declare a national state of emergency, Trudeau said that, so far, that has not been necessary to leverage the federal tools, resources and powers required to respond to the crisis.

Prime Minister Justin Trudeau says a package of special financial supports is on the way to help millions of Canadians and businesses get through the COVID-19 crisis. 22:01