Police in Abbotsford, B.C. confirm they are investigating the medically-assisted death of a 61-year-old woman whose daughters say should not have been approved for the procedure based on the state of her mental health at the time.

The case involves Donna Duncan, a nurse and mother who died on Oct. 29, 2021. It appears to be among the first assisted-death cases being reviewed by a police unit in Canada, although federal officials don’t keep statistics on when such cases are reported to police.

Her daughters, Alicia and Christie Duncan, say they requested a police investigation after what they claim were troubling circumstances around their mother’s case that raise questions about why she was approved for medical assistance in dying (MAID).

“I don’t want this to ever happen to another family ever again. And ultimately I want stronger laws and legislation,” said Alicia.

Duncan was a long-time psychiatric nurse, described by her daughters as “happy” and “very enthusiastic about life.” The daughters say that, despite previous health problems including breast cancer, she never suffered from anxiety or depression.

On Feb. 25, 2020, Duncan was in a car accident, near her home in Abbotsford.  The following day at a walk-in clinic, she was diagnosed with a concussion.

But as COVID-19 restrictions were implemented across Canada, her daughters say her medical care and rehabilitation were curtailed.

“It was March and that’s when the COVID shutdown happened. So she didn’t have treatment for months and months,” said Christie.

Medical documents obtained by the sisters and shared with CTV News also show that Duncan complained about headaches, bright lights, and difficulty concentrating, watching TV, or using a computer. In July 2020, she was identified as having post-concussion syndrome. Her daughters suspect the problems were compounded by stay-at-home orders during the pandemic.

“She was acting very strange and very out of character for her and was more irritable,” said Christie. They also said Duncan began losing weight.

The daughters say Duncan was prescribed medication but rarely took it for long periods.

“So she would try it for one day and say, ‘Oh, if that one doesn’t work, I’m not going to take that. Oh, yeah, the antidepressants don’t work,’” said Alicia. 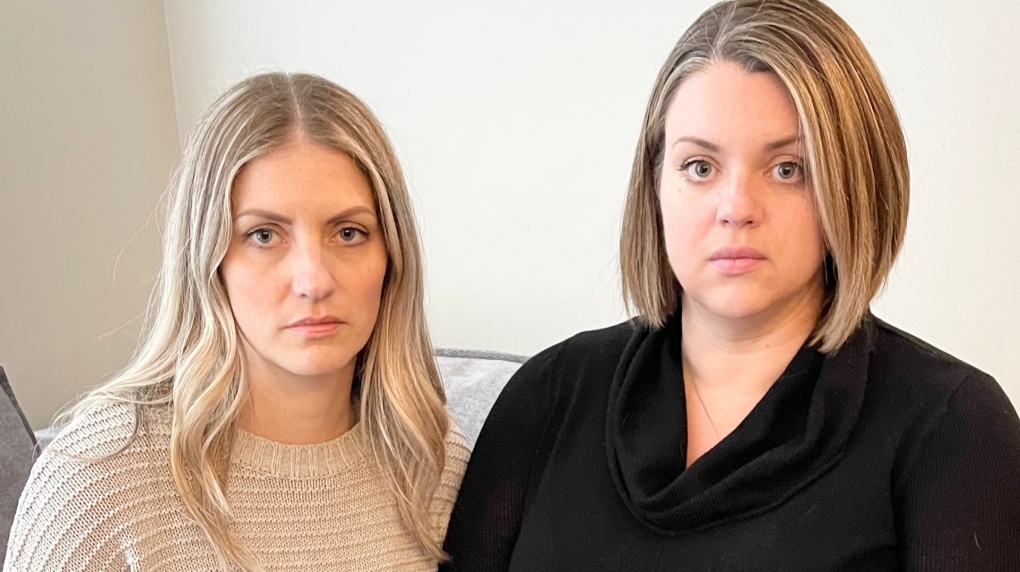 Donna Duncan’s daughters, Alicia and Christie, say their mother should not have been approved for MAID.

For over a year, the daughters say Duncan underwent many tests to determine the source of her pain and weight loss but no physical cause was identified. Duncan herself suggested she might have Central Sensitivity Syndrome (CSS), a pain-related condition. Physical trauma like a car accident is considered a possible trigger.

Documents show that Patel referred Duncan to a clinic at B.C Women’s Hospital that specializes in pain syndromes. But Duncan’s daughters say she never went to the appointment and so was never formally diagnosed with CSS.

In early October, a psychiatrist in Abbotsford, Dr. Shah Khan, saw Donna and reported in medical records that while the source of her physical problems was unclear, a somatic disorder was likely part of the picture. This condition causes an extreme focus on physical symptoms such as pain that cause emotional distress. Treatments include therapy, antidepressants, and treatment by a specialist in mental health, according to the Cleveland Clinic.

By October 2021, the situation turned into a crisis.

Weighing just 82 pounds, Duncan kept losing weight and was using a walker. Her common-law partner, Rick Hansum, said she had been suffering for months and was rapidly losing weight despite consuming 1,500 calories a day.

“She couldn’t wear clothes because they hurt. Pureed food and shakes felt like broken glass. People don’t realize the pain she was in,” Hansum told CTV News in a phone interview.

Duncan asked Patel to approve her for a medically-assisted death, telling him she had a poor quality of life, according to medical records. He declined. In medical notes provided to CTV News by Duncan’s family, he wrote that her “mental health really needs to be treated” and that she had only tried a couple of anti-anxiety medications, which she discontinued.

She was referred to a psychiatrist, Dr. Abid Khattak, who on Oct. 14 told Patel he believes the depression is related to her illness over the past one to two years and her refusal to “take any medications.”

The notes from Khattak also say “her feeling that this is all physical is so strong that unless she is made aware that treating the mental health condition is a process and takes time…it would take weeks to months to realize the improvements.”

Several psychiatrists’ names were suggested for follow-up care in the visit record, but Duncan ultimately went to B.C.’s Fraser Health to seek MAID.

MAID laws in Canada require two health practitioners to approve someone for a medically-assisted death. There are criteria doctors or nurse practitioners must follow, including discussion of whether other measures to treat the patient’s illness have been taken.

With the two signatures, Duncan’s death was scheduled for two days later, on Oct. 26.

At that point, Alicia and Christie say they went into panic mode.

“She said, I’ve been approved…. and she said, ‘yes in 48 hours’ and I just started crying and was in complete shock,” said Christie.

The daughters obtained a court injunction halting the procedure and were granted a mental health warrant allowing police to take their mother to the emergency unit at Abbotsford Regional Hospital.

A psychiatric consult on Oct. 26 by Dr. Zia Ui Haque said he “saw no convincing evidence of depression (or) anxiety” and deemed Duncan competent to make the choice “even though she may be making an unwise choice about medical assistance in dying.” He also noted that she had “not explored other avenues including pain relief or any other medical intervention,” according to the consultation document shared with CTV News.

That night at home, Hansum found her on the floor with a “lacerated” left wrist, which sent Duncan back to the hospital for stitches.

On Oct. 27, she had another psychiatric assessment by Khattak who found Duncan “in distress,” said that her mood was “depressed” and that she had “limited insight into her problem.” She agreed to a transfer to another hospital in Chilliwack, telling doctors she was embarrassed being in the Abbotsford hospital, having worked there as a psychiatric nurse.

At the second hospital, doctors again assessed Duncan and determined she was not depressed, and cleared as competent.  She was released from hospital on Oct. 29 at 4:30 p.m.

Alicia and Christie say that around 9:30 the same night, they received a text from Hansum with the message their mother had a medically-assisted death at home, according to her wishes.

“I believe Donna had the right to make the choice she did,” Hansum told CTV News. “Her decision for MAID was not an easy one. But she was comfortable with the decision once she made it.”

The death certificate shared with CTV News shows that while MAID was listed as Duncan’s cause of death, Central Sensitivity Syndrome is the underlying cause or reason, noting that she had suffered for 18 months. However, the daughters argue their mother had never been formally diagnosed with CSS and had never seen a doctor for treatment of this condition in part because of long wait times, and because her family doctor said the underlying depression and anxiety needed to be treated first.

The death certificate also says Duncan suffered from frailty and cachexia, a wasting disorder.  Her daughters requested an autopsy to see if there was another underlying disease, and say they still don’t have a copy of the results.

“She hasn’t been properly assessed. I really felt that had she been forced to take antidepressants….. I think our mom would be alive,” said Alicia.

“If my mother had not been suffering from mental illness, she would [not have] thought this. She is a two-time cancer survivor. She would have survived this, but she was not in a place mentally to be able to make that decision subjectively,” said Christie.

Alicia and Christie took their case to Abbotsford police. Officials have been looking at the case for nearly two months, according to information received by the daughters. Police declined to comment on their investigation or on whether any charges will be laid.

“I ask that you allow the investigative team a chance to follow the evidence in this case and give them time to do that. These types of investigations are very complex and take a significant amount of time to complete,” Const. Paul Walker, media relations officer for Abbotsford police, wrote in an email to CTV News.

In an email, a spokesperson for B.C’s Fraser Health wrote that the health authority offers “condolences to the family.” Fraser Health “abides by current federal legislation which states that Medical Assistance in Dying is provided only to legally eligible patients,” the spokesperson said.

“This is a concerning case,” said Trudo Lemmens, a University of Toronto law professor who is also studying MAID in Canada and the country’s plans to expand assisted death to those with mental illnesses in May 2023.

“The speed by which this happened is concerning,” he said, pointing to the fact that Duncan’s assisted death was scheduled just two days after approval.

The case also raises questions about conflicts in families around the time of MAID requests. It has arisen in other cases, like that of Alan Nichols, whose family members discovered two days in advance he was approved for a medically-assisted death and questioned the medical decision-making for a man who refused to take medications for mental illness.

Alicia and Christie have set up a petition and fundraiser hoping to tighten laws around the approval of medically-assisted death. They want better safeguards, along with ways that families can participate in MAID assessments.

“There (are) too many gray areas that are allowing doctors to end people’s lives instead of treating them,” said Christie.

Lemmens said their case offers a wider lesson on the need for a better way to review MAID cases that include families in a decision that is so final.

“We need to reflect on how to address the concerns of family members who lose loved ones in MAID procedures that appear to disregard patients’ complex physical and mental health situation and without having tried all other options to relieve their suffering,” said Lemmens.