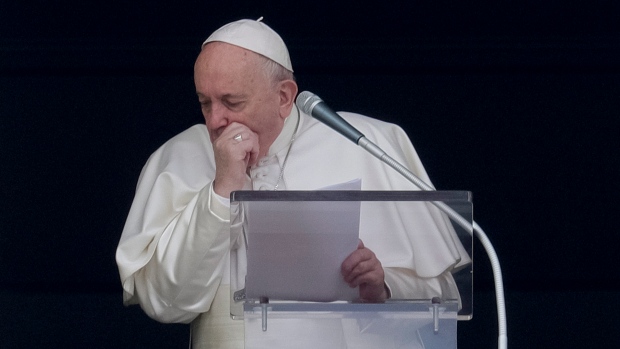 MILAN — Pope Francis is further limiting his public appearances to prevent crowds from gathering as a precaution against the spread of coronavirus, which by Saturday had reached the tiny Mediterranean island nation of Malta.

The coronavirus outbreak is tightening its grip on day-to-life life across Europe, particularly in Italy, which is the country with the most cases outside of Asia.

Italy on Saturday recorded its biggest daily increase in coronavirus cases since the outbreak broke out in the north of the country on Feb. 21. Another 1,247 cases were reported taking the total to 5,883. Another 36 people also died as a result of the virus, taking the death toll to 233. Most of the deaths have been among the elderly, with one or more underlying condition.

The head of Italy’s national health institute, Silvio Brusoferro, urged Italians to take precautions, including avoiding public places and maintaining a distance, to protect the elderly.

He said there was `’evidence of superficial attitudes” toward the measures. The elderly were urged to stay at home if possible, and to avoid emergency rooms, contacting their doctors directly in case of illness.

Italian police requested a stop to gatherings in St. Peter’s Square. In compliance, the Vatican said Francis will deliver his next two public blessings via video, rather than in person.

Both the pope’s traditional Sunday noon blessing and the Wednesday audience will be streamed from the library in the Apostolic Palace. The measures come after the Vatican confirmed its first case of the virus on Friday.

Francis, who is recovering from a cold, has restricted his normally packed public schedule, and also stopped celebrating morning Mass before invited guests at the chapel in the Vatican hotel where he lives.

At 83, and with part of one lung removed from a respiratory infection when he was a young man, Francis is potentially at risk of serious complications if he were to catch the virus. Italy has recommended that elderly people remain at home.

Italy has also asked people to maintain a one-meter (three-foot) distance from strangers in public and to refrain from unnecessary travel. For an economy on the verge of recession, the hit on the tourism industry is a particular blow. Bookings, particularly from abroad, have fallen precipitously across the country, with occupancy rates down to 1% to 2% in Venice.

Health Minister Roberto Speranza urged Italians to follow the norms, no matter how difficult or inconvenient.

`’Beyond the work of the state and the regions, we need the personal contribution of each citizen,” Speranza told Sky TG24. `’It won’t be norms that win this challenge. We need everyone’s contributions.”

The one-meter measure was having some impact.

In an open-air market in free-wheeling Rome, stand owners posted notices advising clients to keep their distance — and people appeared to be observing the government’s recommendation. In Milan, security guards checking tickets at the main train station stood too far back to see, and instead waived passengers through to the tracks rather than come nearer inspect tickets.

But compliance was not universal.

Despite the pleas, life appeared to go on as normal in the northern city of Padua, where restaurants, bars and outdoor markets were full of people enjoying a sunny day. And elsewhere in Rome, butchers, bakeries and pizzerias were packed.

Italy has adopted a piecemeal approach to protective measures, balancing the imperative to reduce contact with the necessity of continuing economic activity. The government shut down schools through March 15 nationwide and advocated remote working, but reopened museums, which had been closed in the north, with the one-meter rule being enforced. Cinemas and theatres in the north remain closed.

Italy has so far borne the brunt of the outbreak in Europe — particularly the north — but the cases elsewhere are mounting.

In Spain, where eight people have died, authorities believe that an important outbreak in the northern part of the country are linked to a funeral were many people became infected.

In Britain, where a second person died Friday of the virus, the public was told to prepare itself for `’social distancing,” which could include temporarily reducing socializing at entertainment or sporting events or reducing non-essential travel on public transport and recommendations to work from home.

Malta’s health minister on Saturday confirmed the first case, a 12-year-old girl of Italian origin who lives in Malta and is believed to have contracted the virus after she and her family visited northern Italy recently. All four had self-quarantined upon their return to Malta and were transferred to an isolated section of Malta’s main public hospital.

Maltese authorities also announced that MSC Cruises had agreed that the MSC Opera would not enter its port due to coronavirus fears generated by `’misleading information given by a local media outlet through a story riddled with partial truths and erroneous details.”

Concern arose following reports that an Austrian passenger who had disembarked from the MSC Opera after another cruise on Feb. 28 in Genoa, Italy had tested positive for the virus several days after returning home, according to MSC.

Both Malta authorities and MSC said none of the ships current manifest of 1,579 passengers and 723 crew are infected with the coronavirus but that the decision was taken mutually to avoid the risk stirring public protests in Malta. The MSC Opera continued to Messina, Sicily, where passengers were allowed to disembark after officials reviewed medical records.