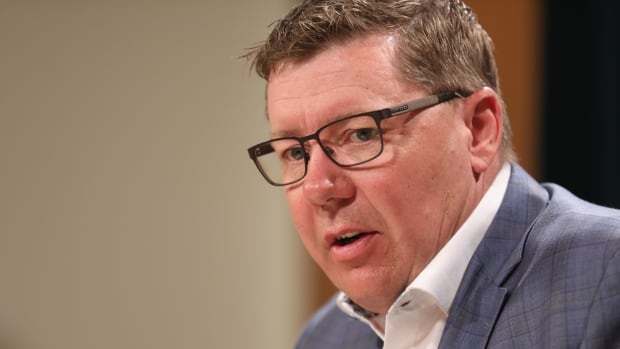 Premier Scott Moe admitted Tuesday that Saskatchewan should have responded faster to the deadly fourth wave of COVID-19 that continues to sweep through the province.

“Should have the province moved a week, possibly 10 days earlier?” Moe said to host Leisha Grebinski on CBC’s Saskatoon Morning.

“You know, with the hindsight that we have now, I think we likely should have.”

It was a slight change in tone from Moe, who has steadfastly refused to apologize for the decisions made by the provincial government in responding to COVID-19.

In a separate interview on The Morning Edition Tuesday, host Stefani Langenegger questioned Moe about why he has yet to apologize when other politicians like Premier Jason Kenney have.

Instead of answering the question directly, Moe said the ongoing issues around health care in the province are the result of those who remain unvaccinated.

“I am sorry that we have experienced those slowdowns here in the province, and the government is and continues to do everything that we can to ensure that those services are available to Saskatchewan people as as soon as we are able,” he said.

15:48Premier Scott Moe interview as COVID-19 patients being flown out of province

Over the next two days six Saskatchewan people who are in the ICU with COVID-19 will be flown by air ambulance to six different hospitals in Ontario. How did it come to this? Host Leisha Grebinski speaks with Premier Scott Moe. 15:48

Daily new case counts in Saskatchewan have been trending downward over recent days. Despite that, the province announced yesterday that it has requested assistance from the federal government and that it will be moving six COVID-19 ICU patients to Ontario so they that can receive treatment.

Saskatchewan remains the province with the highest rate of COVID-19-related deaths and highest rate of cases over the past two weeks, according to data from Health Canada.

Langenegger asked Moe why the province hasn’t implemented more stringent restrictions, as has been done in Alberta.

“Well, we don’t do everything that Alberta has done. We have, you know, charted somewhat of a different path here in Saskatchewan,” Moe said.

“You’ve got the highest death rate in the country,” Langenegger responded.

“If you look back throughout the COVID pandemic, that just simply isn’t true,” Moe said.

“You’ve got the highest death in the country right now,” Langenegger responded.

Health officials and experts have repeatedly said that hospitalizations and ICU admissions are lagging-indicators, which means they could get worse before eventually improving.

As the province begins transferring some COVID-19 patients to Ontario, Premier Scott Moe is on the program to take our questions. How’s the province doing when it comes to COVID-19 and are more restrictions needed to flatten the curve? 12:57

Throughout both interviews on Tuesday, Moe offered a multitude of defences for his government’s actions during the fourth wave.

But many of the defences offered by Moe misstate the timeline of the government’s decisions or ignore important context.

During both interviews, Moe said that Saskatchewan was among the first provinces to introduce a proof-of-vaccination policy.

It’s a claim that is missing important context.

Premier Scott Moe announced on Sept. 16 that its proof of vaccination policy would come into effect on Oct. 1.

Only three other provinces — Nova Scotia, Prince Edward Island and Newfoundland and Labrador — instituted a proof-of-vaccination policy or vaccine passport after that date.

Some of those provinces had a policy in place a full month before Saskatchewan’s own proof-of-vaccination policy came into effect.

Another claim by the premier missing important context was his suggestion that Saskatchewan could’ve acted a week or even 10 days sooner in its response to the fourth wave.

That piece of information is missing the important context that health officials in Saskatchewan were urging the premier to act weeks before they finally did.

On Aug. 26, a letter signed by on behalf of medical health officers from across the province was sent to the provincial Ministry of Health.

That letter urged Saskatchewan to return to mandated masking in public indoor spaces and a proof-of-vaccination policy.

It was rejected by Moe who said that it wouldn’t be his government “that comes out and forces such a policy.”

Moe would continue to reject calls for more restrictions until eventually reversing course on Sept. 16, or 21 days after the letter was sent to the Ministry of Health.