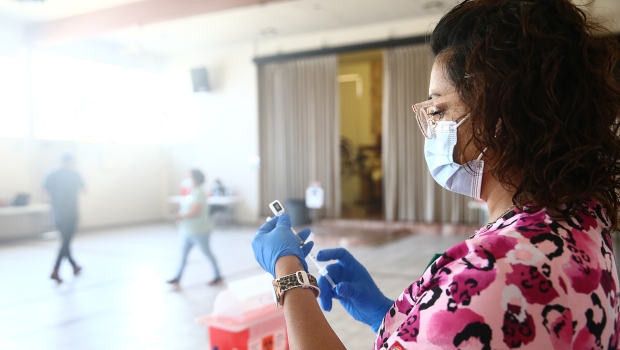 As experts grow concerned about a possible COVID-19 surge in the winter, the director of the U.S. Centers for Disease Control and Prevention acknowledged it’s still possible seasonal vaccine boosters will be necessary.

“We want to hope for the best, and prepare for the worst,” CDC director Dr. Rochelle Walensky told actress Jennifer Garner in an interview streamed on Instagram.

More than a third of the U.S. is fully vaccinated against coronavirus, but it’s still short of the benchmark of 70 per cent to 85 per cent of the total population that needs to be immune — through vaccination or previous infection — to control its spread.

And many yet to receive the vaccine are those who have not decided whether they want it or have decided against it.

Meanwhile variants have been spreading, threatening to mutate to a point where current vaccines may not offer enough protection against them, experts warn.

Researchers at the CDC are looking into whether a booster specific to variants that are already in the U.S. will be needed as well as if protection from the virus fades over time, Walensky said.

“We are doing the studies on boosters to see if we will need them, and that is six months, one year, two years — we don’t really know,” Walensky said. “But we want to be prepared for them should we need them.”

If the U.S. does need them, officials have processes already in place to get them out.

“The vision would be that we would do it in the same way that we do flu vaccine,” she said. “We hope we don’t have to do it every season, but we’re preparing in case we do.”

CONFLICT OVER ASKING ABOUT VACCINATION STATUS

Health experts have hailed vaccination as the ticket back to a sense of normalcy, but officials have come up against conflicts over who can monitor vaccination decisions.

Wyoming is the latest state to prohibit state agencies from asking people whether they have been vaccinated against COVID-19.

Under a directive signed Friday by Gov. Mark Gordon, the state boards and agencies are ordered to “provide full access to state spaces and state services, regardless of a constituent’s COVID-19 vaccination status.”

“Vaccine passport programs have the potential to politicize a decision that should not be politicized,” Gordon said in a written statement. The press release notes that the governor has been vaccinated and encourages the residents of his state to voluntarily be vaccinated.

Unlike a similar order signed by the governor of Florida, the Wyoming directive is only mandatory for the state government.

However, it says local governments and private businesses “are encouraged” to follow Gordon’s directive.

Florida’s law prohibits businesses from asking whether employees or customers have been vaccinated.

The CEO of Norwegian Cruise Line Holdings Ltd. said Thursday it could cause the company to suspend Florida departures and move its ships elsewhere.

“At the end of the day, cruise ships have motors, propellers and rudders, and God forbid we can’t operate in the state of Florida for whatever reason, then there are other states that we do operate from, and we can operate from the Caribbean for a ship that otherwise would have gone to Florida,” CEO Frank Del Rio said during the company’s quarterly earnings call.

“In Florida, your personal choice regarding vaccinations will be protected and no business or government entity will be able to deny you services based on your decision,” Gov. Ron DeSantis said.

Meanwhile, vaccine manufacturers are preparing for the long haul.

Pfizer/BioNTech, whose vaccine currently has an emergency use authorization, announced the initiation of its application to the U.S. Food and Drug Administration for full FDA approval for people ages 16 and older.

This would be the first COVID-19 vaccine to be assessed for full approval from the FDA.

“We are proud of the tremendous progress we’ve made since December in delivering vaccines to millions of Americans, in collaboration with the U.S. Government,” Albert Bourla, chairman and chief executive officer of Pfizer, said in a statement. “We look forward to working with the FDA to complete this rolling submission and support their review, with the goal of securing full regulatory approval of the vaccine in the coming months.”

The FDA is already poised to authorize the company’s vaccine in children and teens ages 12 to 15 by early next week, a federal government official told CNN.

The vaccine also has been undergoing a safety and efficacy study in children ages 6 months to 11 years, and the company said it expects to submit for FDA emergency use authorization for children ages 2 to 11 in September.

On Friday, the CDC updated its explanations on how coronavirus is transmitted to stress that inhalation is the main way the virus is spread and placing less emphasis on the risk of picking it up from surfaces.

“COVID-19 spreads when an infected person breathes out droplets and very small particles that contain the virus. These droplets and particles can be breathed in by other people or land on their eyes, noses, or mouth. In some circumstances, they may contaminate surfaces they touch. People who are closer than 6 feet from the infected person are most likely to get infected,” the agency says on its updated website. The CDC also updated its scientific brief on how the virus spreads.

“This is not new guidance. This is the beginning of how, perhaps, guidance will begin to evolve,” Dr. John Brooks, chief medical officer for the CDC’s COVID-19 response, told CNN.

It doesn’t change what people need to do, but might help the public better understand how the virus spreads, Brooks said.

The guidance remains the same — wear a mask when near other people or inside and sharing air with others, keep a distance from others when possible and wash hands frequently.