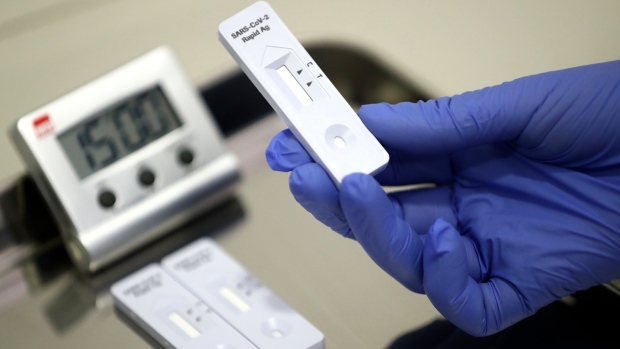 With the holidays fast approaching, many Canadians are looking for ways to ensure their holiday gatherings are safe amid warnings that the Omicron variant is picking up speed in the country.

Rapid antigen tests (RATs), which offer on-the-spot COVID-19 test results in less than 20 minutes, have become the centre of holiday gathering discussions. But thanks to a muddled distribution process and high prices, getting the tests into the hands of Canadians who need them has so far proven difficult.

“If we had this test readily available for families, I think people will want to test before they go to congregate settings or large indoor gatherings,” Birgit Umaigba, an Ontario-based ICU and ER Registered Nurse, said in a telephone interview with CTVNews.ca Tuesday.

“But without equitable access, it is impossible to achieve that…not many people can afford to pay $40 for the rapid tests, especially if you have a family of five, six, seven.”

Umaigba is one of the many health professionals vocally advocating for provincial governments to make RATs free to address inequity in testing access and prohibitive costs.

Experts say the tests are crucial for reducing transmission at this stage in the pandemic.

“Are people going to just mask their symptoms or disregard their symptoms because they can’t afford rapid antigen test? Absolutely,” she continued. “It shouldn’t be profit over people. It should be people over profit.”

“The cost is financially prohibitive for many Canadians, and it doesn’t need to be,” Hasan said. “Right now it costs less than a dollar for manufacturers to produce rapid tests, so they’re very cheap to make – and given how fast they are to get results, they’re critical for our uptake.”

Hasan is calling for Health Canada to approve more companies to manufacture the tests domestically, so that like the U.K and Germany, they can be used as part of Canada’s national strategy and day-to-day COVID-19 protocols.

“In the U.K., they’re able to distribute free rapid tests to every household and Singapore is the same – you can even get them from vending machines,” Hasan said.

“They’ll be able to find out right away if they are positive or not, and then follow the due protocol, which is going for a PCR test and isolating as required,” she said. “Heading into the holidays, people will gather no matter what…you know a lot of people have been doing their part – we want the government to do their part too.”

Hasan pointed out that the federal government has provided each province with tens of millions of rapid tests, but “only a small fraction have been used.”

“It’s a missed opportunity to be able to safeguard the public…we want the provincial governments to free the RATs that are in the warehouses,” she said. “The warehouses don’t need to be kept safe, the people do.”

Canadians looking to order their own RATs online to their home or pick up tests from pharmacies are facing prices anywhere from $8.75 to $40 per test.

A 25-pack of Abbott Panbio rapid tests is $218.75 online, and some Costco pharmacies across Canada are taking appointments for rapid testing on-site, as are certain Walmart locations.

Canadians going to Shopper’s Drug Mart for rapid tests, including screenings for travel purposes are charged $40.

In Ontario, free RATs are available for organizations or businesses in the health, policing, community, childcare and social services sector or for industries in the private sector, such as manufacturing, transportation, grocery and restaurants.

Saskatchewan, however, provides free rapid tests for the general public in participating locations throughout the province, detailed in a map on the provincial government website.

In B.C., qualified businesses can get free tests for their employees through the safescreenbc.ca website, as can industries and organizations with a high risk of transmission, such as long-term care homes or congregate living.

Albertans who are part of any public, private or not-for-profit employer or service provider with an approved COVID-19 screening program can get free rapid tests through the provincial government website.

According to an email sent out by Blue Cross to pharmacies in the province, and obtained by CTV News Edmonton, free testing kits will be available at participating pharmacies in Edmonton, Calgary and Red Deer, as well as Alberta Health Services facilities in other communities, starting in mid-December.

Although Blue Cross asked pharmacies in its email to sign up to become a distributor starting Dec. 10, with shipments beginning this week, it said pharmacies are not allowed to give out testing kits until the Alberta government announces the program.

Umaigba pointed out that some find it “inequitable” that some provinces provide free rapid tests and others do not.

“Where is the balance here? How do you justify that when we are all in the same pandemic?” she said.

In Ontario, people are allegedly using a loophole to order RATs through their businesses in order to test family members before the holidays instead of purchasing them online or making an appointment.

“We’re all in this together, businesses should step up and donate some and hold the government accountable and tell them ‘even though I’m protected, I want my neighbours to be protected too,’” she said.

Ontario’s Ministry of Health did not address a question about the loophole in a statement to CTVNews.ca.

A spokesperson said the province has distributed more than 45.8 million rapid tests as of Tuesday, “significantly more than all other provinces combined,” including 11 million for public school students ahead of the December break.

The spokesperson also said the province is continuing to urge the federal government to increase the number of approved rapid tests available for use in Ontario and across Canada.

“To continue providing an additional layer of protection against COVID-19 and variants, as part of its enhanced winter testing strategy the province is launching a holiday testing blitz next week to offer voluntary rapid antigen screening to asymptomatic individuals free of charge,” they said.

Hasan said the Ontario loophole “speaks to the inequity of the distribution of rapid tests.”

“The fact that we are only protecting businesses is not right,” she said. “We are all deserving of preserving our health.”

With files from Michael Lee