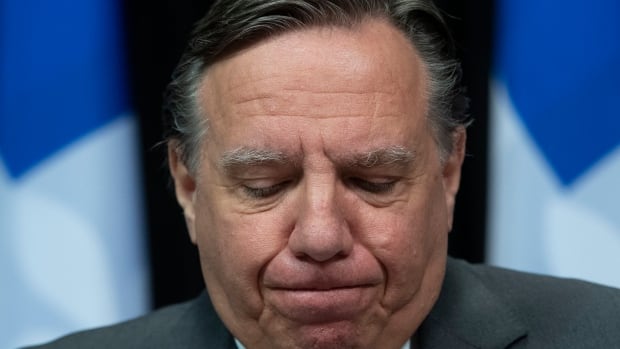 Quebec has hit another sombre milestone: more than 5,000 deaths from the novel coronavirus.

Premier François Legault acknowledged that marker at his daily briefing on Tuesday.

“I want to offer my sympathies to the families of these victims. As a government, this tells us that we must do better in the future,” he said.

More than 80 per cent of the dead were residents of the province’s long-term care facilities, known as CHSLDs, and to people with more autonomy living in private seniors’ residences, or RPAs.

The province’s nursing homes, already short on staff and resources before the pandemic, struggled to contain the virus.

At the height of the crisis last month, nearly half of the province’s 412 CHSLDs were dealing with at least one confirmed case of COVID-19.

Legault pointed to a decline in cases in saying the situation in the homes has improved, and will get better as a program to train 10,000 orderlies gets underway next week.

Even as the death toll mounts, however, the spread of the virus appears to be on a steady decline.

After opening up businesses last month, the province recently announced further plans to allow restaurants to reopen for sit-in dining and for hair salons in the Montreal area to begin taking clients.

For the second straight day, fewer than 200 new cases of COVID-19 were recorded, with that number falling Tuesday to 138 — the lowest since March 22.

The rate of hospitalization is also on the decline, Legault noted. At the peak of the pandemic last month, there were 1,682 people in hospital. As of Monday, there were only 961.

“But that doesn’t mean the virus is gone,” he said.

“Even if we gradually reopen our economy, we must stay vigilant.”

Quebec accounts for the majority of the deaths from the virus across the country.

To date, across Canada, there have been 7,940 deaths related to COVID-19, according to a tally by CBC News based on provincial information, regional health data and CBC’s reporting.

The province with the next highest total is Ontario, with 2,510. British Columbia is a distant third, with 167.