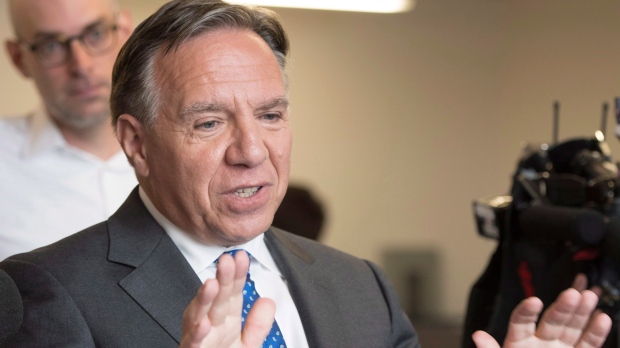 MONTREAL — Quebec will not be closing bars across the province, saying private gatherings are of greater concern than drinking establishments.

Speaking from the Cote-Nord region as part of a tour of Quebec, Legault said after studying the new cases in recent days, the vast majority stemmed from the health network and not from bars. Public health department has still not made a recommendation to close the establishments, he said.

“The majority of the cases weren’t people who went to bars, but the issue is more private gatherings,” he said, reminding Quebecers that gatherings of more than 10 people are not permitted, even for backyard parties or barbeques.

“I’m making a special call to Quebecers, it’s fun to be a big gang, to celebrate, but it’s not the time to do that, ” he said.

Health Minister Christian Dubé also issued a statement to that effect, saying the rules of gatherings of ten people or fewer applies both inside and outside. The rule also applies in chalets and campsites, which are known to be very popular with Quebecers during the summer season, he said.

Director of public health Horacio Arruda added at a separate news briefing in Bas-Saint-Laurent that contact tracing is much more difficult in backyard parties than at bars. Bars can set up a registry and contact put public messages out to anyone who has attended them, Arruda said, whereas backyard parties, people can come and go.

“And we have had good cooperation with them (bar owners),” he said.

Dube said additional measures have recently been put in place to avoid possible outbreaks in bars, including making last call midnight and closing bars at 1 a.m.

He also said he has not ruled out the possibility of closing bars, if case investigations show a link between their opening and certain outbreaks, adding that he is monitoring the situation very closely.

“It is essential at this time that the measures we have enhanced are respected if we want to avoid the spread of the virus and keep the bars open,” said Dube, adding that the government strongly recommends bars keep a register, including customer contact information, allowing for contact tracing in the event of an outbreak.

Legault reminded Quebecers that a new mandatory mask regulation comes into effect Saturday, requiring everyone to wear face coverings in indoor public spaces. In a bar setting, that means wearing a mask into and out of the bar, and when getting up to use the washroom or move about. Masks can be removed when seated at a table, providing people respect the two-metre distance.

He warned that police and inspectors will be deployed throughout the province to ensure the rules are followed.

Legault said the slight uptick in cases in recent days can also be attributed to the number of tests jumping from 8,000 to 15,000 per day, and all health network employees are being tested.