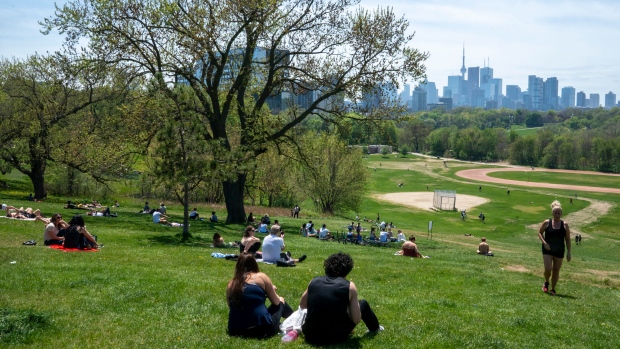 TORONTO — In some areas of Ontario, one of the provinces struck hardest by the pandemic, cases of COVID-19 are rising again in an unexpected group: young people largely in their 20s.

“We don’t want anyone to be getting this virus, but it’s interesting to see this group getting infected.”

Hamilton health officials announced on Monday that over the previous 10 days, around 40 per cent of new COVID-19 cases in the area were identified in those between the ages of 20 and 29.

Officials aren’t sure where or when the specific transmission of the virus occurred to cause this rise in cases, so it’s not as simple as blaming crowds in Trinity Bellwoods park in Toronto or young people flocking back to coffee shops as Ontario slowly re-opens.

Bogoch says that until we have the why and where figured out, it’s hard to do something about it.

“I think we have some unanswered questions, and we really need public health to really get a bit of a deeper dive here for us to appreciate, are these people getting infected because, for example, they’re not adhering to physical distancing measures in social interaction, or are these workers in factories or other places where they’re picking it up at work?” he said.

“We really need to know more, because if we know where they’re getting this infection, we can actually mount a public health response and prevent that from happening.”

Younger people who don’t have pre-existing conditions that affect their immune systems are less at risk of developing severe illness than older Canadians and the immunosuppressed. But a rise in cases among the younger population isn’t without risks.

“It’s a reminder that anyone can get this infection,” Bogoch said.

He acknowledged that there have been and will continue to be severe cases in younger patients, but that it’s “rare.”

The bigger concern, he said, is “who do they go home to? Or, who are they in touch with? Do they have elderly parents, or grandparents that they’re in touch with who might have a more severe illness? Or […] are they commuting, or interacting with others [and] unknowingly transmitting the infection?”

He said that the rise in case numbers could have to do with changes to how testing is done as well, as earlier on in the pandemic, testing was limited only to those with clear symptoms and/or travel history.

But with cases among young people being higher than expected in these areas, it could prevent those regions from re-opening on the same timeline as the rest of the province.

Hamilton Public Health has said they are planning on launching a social media campaign to combat the uptick in cases, but have not released any other details yet.

Amid this concern over younger patients in Ontario, Alberta has released an outline of a potential plan for re-opening schools in September. The western province, which has seen a significantly lower number of cases than Ontario, could be putting students back in classrooms in a matter of months.

Bogoch said that even though Alberta is part of the country that has flattened the curve, there likely will still be smaller outbreaks when schools reopen.

“This is the new normal, unfortunately,” he said. “We know that even if they’re doing everything right, we’re going to see sporadic outbreaks of this infection, and the key here is, do we have the capacity to identify that rapidly and quell it before it turns into a much larger outbreak?”

As for whether kids should wear masks at school, Bogoch said it would probably be a tough sell, especially for younger children.

“In a perfect world they would be wearing masks,” he said. “Because there’s going to be a lot of people under one roof, they’re going to be in settings where they might not be able to practice physical distancing. It would be an ideal situation if they did, it would certainly help.