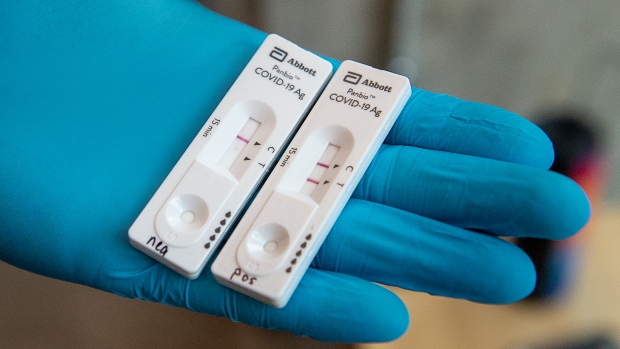 As concerns over the spread of the new Omicron COVID-19 variant seep into Canadians’ holiday plans, experts say rapid tests could be used to help protect those looking to get together with friends and family. However, they warn that the tests aren’t perfect.

Dr. Nitin Mohan, an epidemiologist and assistant professor at Western University, told CTVNews.ca that rapid antigen tests, which can provide on the spot results in about 20 minutes, can “absolutely” be used to further protect Canadians who plan to spend time with family and friends this holiday season.

“What rapid tests do is they provide an indication of someone’s status at that time,” Mohan said in a telephone interview Monday. “[It] provides an extra layer of data that gives you an idea of where you’re sitting in terms of the possibility to transmit the virus to those who are more vulnerable.”

However, Mohan said rapid tests are “only one of many layers of protection” against COVID-19 and do not replace vaccines. He says those looking to gather over the holidays should be fully vaccinated and have a booster shot if they are eligible.

“Omicron, if not now, very shortly will be the dominant strain in Canada,” Mohan said. “So if you want to be extra cautious taking a rapid test prior to the event to ensure that you know you are not transmitting the virus to anyone that’s there, I think that’s a good idea.”

Mohan acknowledged that “nothing is as accurate as” the polymerase chain reaction (PCR) tests, which are widely considered the “gold standard” for COVID-19 testing in Canada, but have a longer turnaround time — usually up to three days. However, he said rapid tests are “within the 80th and the 90th percentile of sensitivity and specificity,” and can help to identify COVID-19 cases quickly.

“We’re not looking at a 99 per cent confidence in terms of the rapid test, but they are still quite high,” Mohan said. “So I think there’s still a clear inherent value in folks using rapid tests.”

Dr. Fahad Razak, a member of the Ontario Science Table and an internal medicine physician at St. Michaels Hospital in Toronto, told CTV News Channel that rapid antigen tests have an “important role” at this point in the pandemic as more transmissible variants continue to emerge.

“The evaluation that we did was based on the Delta variant, which is extremely infectious,” he said Thursday. “We know Omicron is probably even more infectious than Delta.”

Razak said current data suggests that the rapid antigen tests are “very effective” at screening asymptomatic individuals for the current version of the COVID-19 virus that is circulating.

Razak said the accuracy of the rapid antigen tests depends on the characteristic of the virus and explained that as the virus becomes more infectious, the tests actually work better.

Despite this, Razak emphasized that rapid antigen tests should be used for surveillance in asymptomatic people.

“This is for surveillance in a population where you’re starting to get an increased spread, and you want to prevent those outbreaks from occurring,” he said. “And with Delta, these tests seem to work extremely well in that kind of application.”

However, Dr. Matthew Oughton, an infectious disease specialist at the Jewish General Hospital and McGill University in Montreal, said it is important to remember that rapid tests aren’t perfect.

“It’s not perfect and no one should assume that, especially with rapid tests, that a single negative test means that it’s absolutely impossible that you have an infection and could be contagious,” Oughton said in a telephone interview with CTVNews.ca on Monday.

While a negative result from a rapid test may make the possibility of infection less likely, Oughton said it “still doesn’t preclude the possibility” that someone could attend a get together without knowing they are infected.

But because the Omicron is “not only more infectious, but even more rapidly infectious,” Oughton said rapid tests can be a good tool to use when deciding to see family over the holidays, if used properly and in a timely manner.

“With Omicron, that means that you can’t rely on a negative test that is old,” Oughton said. “So If you’re going to some sort of get together, then it really makes sense to do that rapid test very soon before that gathering happens.”

However, he stressed that if an asymptomatic individual receives a positive rapid test result, or develops COVID-19 symptoms, they will still need to get a PCR test at a testing centre and should “govern themselves as infectious” until the results of a PCR test are received.

Amid concerns over Omicron spread, Oughton said Canadians need to continue to take caution over the holidays, adding that that rapid tests aren’t the only measure Canadians should use when gathering.

“Even if you do a rapid test the day of a party and even if the rapid test is negative, but if you start having symptoms, then I would encourage people to not go to that get together because there’s always a possibility that the rapid test missed it,” Oughton said.

With files from CTVNews.ca’s Hannah Jackson