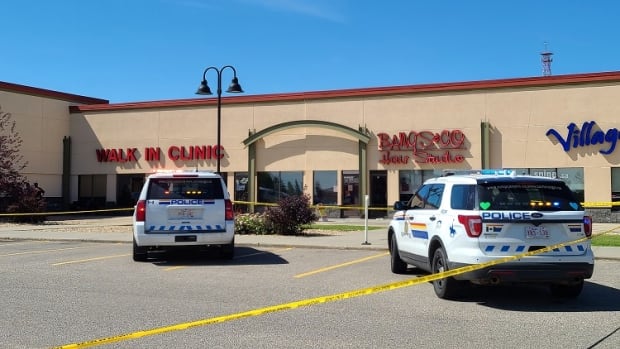 The following story contains graphic details that some readers may find disturbing.

A Red Deer physician died Monday after he was attacked in an examination room at the Village Mall walk-in clinic.

RCMP said one man is in custody and the major crimes unit has taken over what police called “an active homicide investigation.”

Anina Mullin said she was in the clinic with her 13-year-old daughter when she suddenly heard screams coming from an examination room.

Mullin said she heard banging and it sounded like the victim was trying to save himself and fight off the attacker.

She said a panicked receptionist enlisted help from two male patients who tried to get into the room, but Mullin said someone slammed the door in their faces. They then ran to the reception area, where Mullin was standing, waiting to be checked in.

“So I just grabbed my daughter’s hand … and we just ran out the door as fast as we could,” she said.

The two men pushed against the door from the outside to make sure the attacker couldn’t escape.

As Mullin watched from her car, police, paramedics and the fire department arrived outside the clinic.

“One of the cops went to the door with his gun drawn and poked his head in,” Mullin said. “I heard him yell, ‘Put that down or I will shoot.’ “

She said someone threw a blood-soaked hammer at the police and it flew out the door and onto the cement pad in front of the clinic.

She heard the officer order the man to put a machete down. Then officers rushed inside the clinic.

Mullin saw officers lead out a man she described as “huge.” He was wearing a grey hoodie and baggy grey pants and she said he had a disposable face mask that wasn’t covering his mouth, so she could see him with “kind of a smirk on his face.”

Mullin watched in horror as her long-time family doctor was taken out on a stretcher.

“He was covered in blood from his head to his belt area. They were applying pressure to his forehead.”

At this time, CBC News is not naming the doctor.

Mullin described her doctor as “amazing.”

While she continued to watch, Mullin saw other staff members pour out of the clinic at 6230 50th Ave.

“They were just beside themselves,” she said. “It was awful.”

Dr. Christine Molnar, president of the Alberta Medical Association, said the news of the attack came as a shock and said the organization will be reaching out to staff at the Red Deer clinic.

“I have just learned of this horrific attack on a Red Deer physician,” she said.

“I can’t express my sense of disbelief and great sorrow for his family, his colleagues and the Red Deer community. The AMA will be reaching out to local medical staff to learn how we can best provide support at this time.”