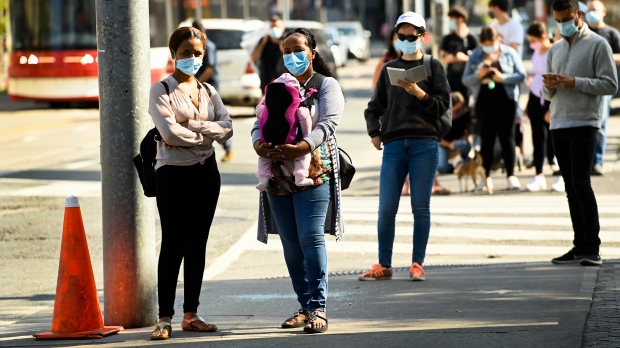 TORONTO — New research suggests Black, South Asian and Indigenous Canadians are far more likely than white Canadians to have multiple medical conditions putting them at higher risk of severe outcomes from COVID-19, and the author behind the study is urging the federal government to track how the virus is affecting minority groups.

The study, written by University of Toronto PhD student Shen Lin and published in the journal The Gerontologist, compared past health data from 1,102 racialized immigrants and 338 Indigenous Canadians with 23,802 white people born in Canada, ages 45 and up.

But when he looked at those same three groups through an intersectional lens and focused on low-income individuals and those without a post-secondary education, the likelihood of having three or more pre-existing conditions spiked to nearly four times that of white Canadians.

Hypertension, diabetes and obesity were the most common conditions.

Lin said his findings expose a long-standing problem: racialized groups in Canada are much more likely to have multiple chronic health issues. However, COVID-19 has only exacerbated the problem.

“Once COVID came, it was like a tinder box,” Lin told CTVNews.ca in a phone interview on Wednesday. “It would trigger these underlying conditions and cost a lot of money for the health-care system if we don’t address those underlying medical conditions.”

Lin says this is a mistake, and he’s urging health authorities to begin collecting this data to show the extent of the problem so it can be better understood.

“When I heard the current policy that in Canada we are not collecting raw and social demographic based-data … this is really troubling. So my study really provides timely evidence for public health policymakers to reconsider and we need to collect race-based data to mitigate the pandemic’s long-term harm,” he said.

Lin praised the government efforts such as the Canada Emergency Response Benefit (CERB), but he said many financial resources are geared toward laid-off workers or businesses. To help older populations, who are overwhelmingly more likely to be hospitalized or die of the virus, he said the government needs to focus more on resources for those groups, such as expanding the old age pension and investing in public housing.

International research suggests that racialized groups in other developed countries are more like to suffer severe consequences or die of COVID-19. A study conducted by the University of Oxford found that Black people in the United Kingdom were about twice as likely to die of COVID-19 compared to white people. Researchers concluded that pre-existing medical conditions alone were not enough to explain the trend, and that the over-representation was likely due to social factors, such as a higher likelihood among Black people to work front-line jobs and live in homes with higher household density.

Researchers in Canada are currently conducting large-scale antibody testing on 2,000 Black Canadians in hopes of better understanding how COVID-19 affects the Black community.​

The new study is further proof that Canada is just as susceptible to systemic inequities as anywhere else, Lin said.

“Despite the fact that we have a universal health-care system, (Canada) is not immune to social inequalities in health,” he said.