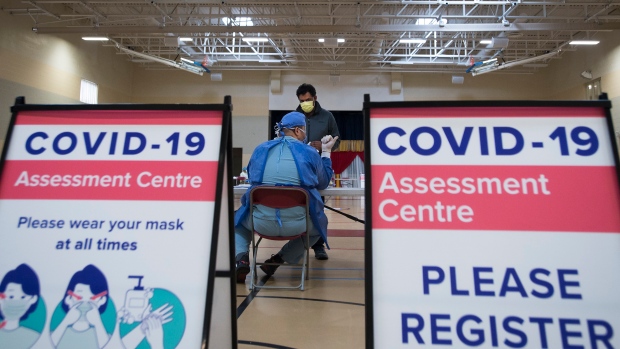 TORONTO — Doctors in Europe are documenting a few COVID-19 patients who’ve later developed a rare and potentially dangerous neurological condition that is typically connected to other viral infections.

Researchers in the United Kingdom and Italy have reported cases of COVID-19 where the patients later developed Guillain-Barre syndrome (GBS), a condition in which the patient’s own immune system attacks the nerves, leading to a weakness in the face or the extremities and even near-complete paralysis.

GBS typically emerges in the days and weeks following a respiratory or digestive tract infection, although it’s still unclear what causes the disorder.

A case report from mid-May in the New England Journal of Medicine shows five people between Feb. 28 and March 21 in northern Italy developed Guillain-Barre syndrome following a COVID-19 infection. Four of the patients initially developed lower limb weakness, while the fifth developed paralysis in their face.

The symptoms began to present between five and 10 days of their COVID-19 symptoms. After four weeks of medical treatment, two of the patients remained in hospital, two were receiving physical therapy for their condition and one had recovered to the point where they could walk independently.

Dr. Isaac Bogoch, an infectious disease specialist at the University of Toronto, isn’t surprised by an apparent connection between COVID-19 and GBS, but believes if it was a common occurrence, we would have heard about it by now.

“It’s still a rare event and no one would be surprised if there were going to be cases of Guillain-Barre associated with COVID-19,” he told CTV News. “Especially in a global pandemic, there’s probably going to be some people that develop it.

“It probably is truly a signal among the noise, it’s just how big is that actual signal?”

A similar report, published on Sunday in the British Medical Journal, documents the case of a 57-year-old man from the United Kingdom who diagnosed with Guillain-Barre syndrome following a COVID-19 infection.

“This is the first reported case of this rare neurological complication of COVID-19 in the U.K., but it adds to a small but growing body of international evidence to suggest a significant association between these two conditions,” the report states. “Increasing appreciation of this by clinicians will ensure earlier diagnosis, monitoring and treatment of patients presenting with this.”

A third study, published in Neurological Sciences back in early May, examines the case of a woman who had developed a paralysis in her face just days after experiencing a mild respiratory conditions. A nasal swab determined she had COVID-19 and she was later diagnosed with GBS.

In a statement, the Public Health Agency of Canada said it is aware of the three case reports, however, any connection between GBS and COVD-19 “remains unproven.”

“The Public Health Agency of Canada continues to monitor scientific publication for new complications associated with COVID-19,” the statement continued.

Bogoch said he hasn’t heard or seen any similar cases in Canada, but doctors have been “on the lookout.”

He added that while he does expect an uptick in GBS related to COVID-19 once researchers can look at a bigger picture of the data, but how big that uptick is remains to be seen.

“At the end of the day, it would be nice to have some systematic data to really evaluate that and look at a number of reported cases in the context of the pandemic compared to other years,” he said. “It will probably be a slight uptick in cases, but maybe not as big as, for example, other viral infections like Zika.”

During the Zika outbreak in 2016, a report out of seven countries in South America and the Caribbean showed GBS at up to 9.8 times the pre-Zika rate, although the complication was still rare.

The U.S. Centers for Disease Control states that GBS is ”strongly associated” associated with Zika, although only a small portion of people with Zika later developed GBS.