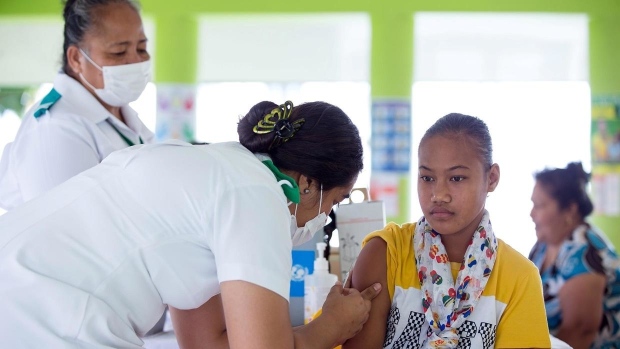 APIA, SAMOA — Samoa has passed a law to make childhood vaccinations compulsory as the Pacific nation continues efforts to contain a devastating measles outbreak that by Thursday had killed 77 people, most of them infants.

The country introduced mandatory vaccination as part of a state of emergency declared in November when the scale of infection sweeping through the 200,000-strong population became apparent.

The move, along with other drastic actions such as shutting down the entire country for two days this month while mobile vaccination teams went door-to door, has succeeded in lifting immunisation rates from around 30 percent to 94 percent.

Malielegaoi dubbed the legislation, which was passed by parliament on Tuesday and takes effect in January, the “law of love”, saying it reflected Samoa’s committment to its children.

“Government will no longer be standing on the sidelines,” he told parliament.

“Samoa is setting a milestone to which its foreign-country friends could follow to ensure the safety of our children.”

Under the law, parents who do not ensure their children are vaccinated, or falsify vaccination records, face fines of up to 10,000 tala (US$3,800).

Unvaccinated children will be barred from schools and principals who accept them also face 10,000 tala fines.

Village councils and schools are expected to have policies in place to ensure all children are vaccinated.

Organisations such as the World Health Organisation and UNICEF have blamed the low immunisation rates that left Samoa vulnerable to measles on anti-vaccination misinformation spread online by overseas-based activists.

Samoan authorities arrested one vocal anti-vaxxer campaigner earlier this month and charged him with incitement as part of a government crackdown.

Other measles outbreaks in Pacific nations which had higher vaccination rates have been more easily contained and not resulted in any deaths.

The epidemic in Samoa is not over, even though infection rates and fatality numbers have decreased as a result of the mass vaccination push.

The government on Thursday reported there had been 53 new cases in the previous 24 hours, taking the total to 5,424, with the number of deaths rising by one to 77.

There are also 17 children critically ill in hospital.

Infants are the most vulnerable to measles, which typically causes a rash and fever but can also lead to brain damage and death.