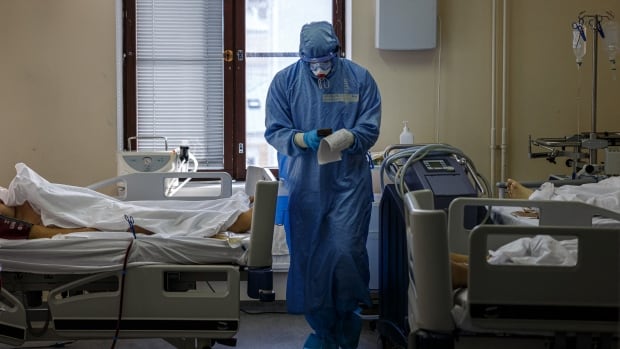 Medical health officers (MHOs) across Saskatchewan are once again pleading with the provincial government to do more to combat COVID-19.

In a recent letter to Health Minister Paul Merriman obtained by CBC News, doctors said the delay in implementing some of the recommendations they called for in August has “resulted in a much larger fourth wave” and stronger restrictions are needed to bring it under control.

“Our calls for province-wide action have not been answered,” read the letter, which was dated Oct. 21 and signed by 21 MHOs.

“In our current context, reported positive cases do not tell the full story. Without further action, it is highly likely that we will face even higher rates of hospitalization in coming weeks and risk health system collapse, as well as many more preventable deaths.”

While much of Saskatchewan’s population is now fully immunized and proof of vaccination requirements have helped improve coverage rates, physicians said the province is not yet expected to meet the level of immunity needed to stop the growth of the pandemic for several months.

Dr. Cory Neudorf — a senior medical health officer with the Saskatchewan Health Authority who helped pen the letter — said the biggest issue continues to be widespread community transmission, particularly among the unvaccinated population.

“It’s no longer an issue where we can afford to wait for increasing immunization rates for a number of weeks to take effect,” he said in an interview Monday. “We need something that’s very quick and decisive — and quite blunt.”

Neudorf said “stop gap measures” — via a provincial order — are needed. Those include:

The doctors said these restrictions, on top of the already-in-place masking mandate, is needed until at least the new year. Their removal should be tied, the letter added, to when 85 per cent of Saskatchewan’s population is fully immunized and the health-care system is stabilized.

“We understand that returning to these restrictions is not what our population wants, or what our leaders want to contemplate, but with the health system in crisis, the alternatives are much worse,” the letter said.

If the government chooses not to implement any new restrictions, doctors say a lockdown similar to spring 2020 could be needed. That would include moving all students back to online learning.

In a letter to physicians on Monday, Saskatchewan Medical Association (SMA) president Dr. Eben Strydom said he’s feeling “such a mix of frustration, anger, sadness, fear and despair” over the government’s inaction.

“Even though it seems like most everything we have advocated so far — as individuals, as groups of physicians, collectively as the SMA — appears to have fallen on deaf ears, we must not stop,” he said in Monday’s letter.

“So you ask: ‘What more can we do if government continues to dismiss our advice?’ We need to reinforce our advocacy efforts by asking each one of you to be directly involved.”

Strydom called on the roughly 3,000 doctors in Saskatchewan to use their voices to educate their patients, along with everyone they interact with in the community.

“In a province our size it wouldn’t take long to reach hundreds of thousands of people. We can make a difference,” he wrote.

Strydom noted he met with Health Minister Paul Merriman last week, and although he “did not leave this meeting encouraged,” he said the SMA will continue to advocate for increased public health measures alongside MHOs.

“Our future depends on what we do today. It really, truly does. We must continue doing everything we possibly can to slow community transmission,” he wrote. “Our patients, our neighbours, our communities, the province need us to stay strong on their behalf, for the safety of themselves and their loved ones.”