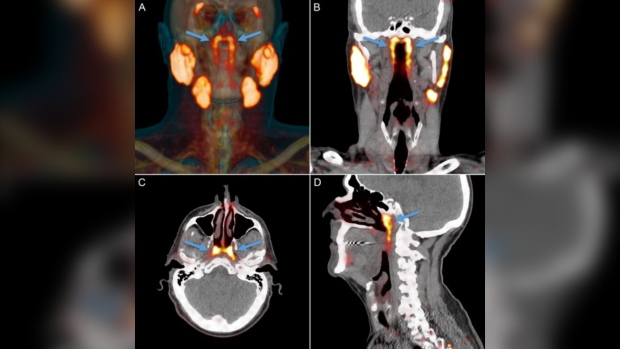 TORONTO — Scientists have discovered a new organ located in the throat that they say may help reduce the side effects of some cancer treatments.

Researchers from the Netherlands Cancer Institute (NCI) say they found the new salivary glands in the upper part of the throat behind the nose while carrying out research on prostate cancer.

Experts previously thought there were only three salivary glands in humans, located under the tongue, under the jaw and at the back of the jaw behind the cheek.

Until now, they thought there were only microscopic salivary glands inside the nasopharynx region behind the nose. However, researchers say this newly found salivary gland organ is likely being used for moistening and lubricating the upper parts of the throat.

According to the study, the human throat contains “previously overlooked bilateral macroscopic salivary glands” which the scientists named as “tubarial glands.” The researchers examined at least 100 patients to confirm the findings and reported that all of them had the glands. They also dissected the nasopharynx region of two cadavers and found the same results.

The findings were published Oct. 16 in the journal Radiotherapy and Oncology.

The glands are approximately 3.8 centimetres in length and are located over a piece of cartilage called the torus tubarius. In comparison, the largest salivary gland in humans is 5.8 centimetres long.

In PSMA PET-CT scanning, doctors inject a radioactive “tracer” into the patient. This tracer binds to the protein PSMA, which is elevated in prostate cancer cells. This combination of scans is also good at detecting salivary gland tissues, according to the study.

The study reported that doctors using radiotherapy for treatment of cancers in the head and neck try to avoid the main salivary glands since damaging them could make eating, speaking or swallowing difficult for patients.

However, researchers were unaware of the presence of this fourth set of glands and were still radiating that area, causing patients to experience side effects.

The study says that sparing these glands in cancer patients receiving radiotherapy may provide an opportunity to lessen such side effects.

Dr. Wouter Vogel of the NCI, one of the researchers involved in the study, said in a press release that researchers plan to study how these new glands can be spared from radiation.

“For most patients, it should technically be possible to avoid delivering radiation to this newly discovered location of the salivary gland system in the same way we try to spare known glands,” Vogel said.

“Our next step is to find out how we can best spare these new glands and in which patients. If we can do this, patients may experience less side effects which will benefit their overall quality of life after treatment.”