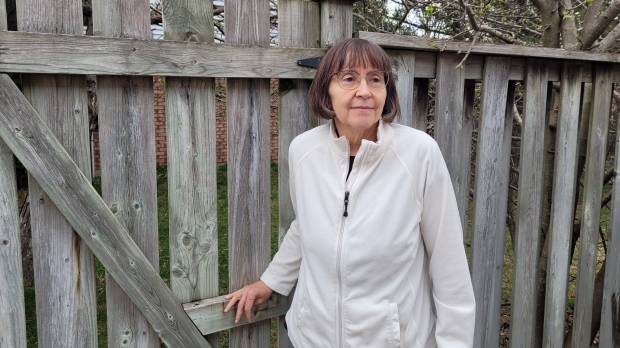 TORONTO — After nearly a year of coping with COVID-19 symptoms, Elaine McCartney is finally feeling better and she says she has the vaccine to thank for it.

“I was averaging about 5,000 steps a week. Since the vaccine, it’s doubled,” she told CTVNews.ca during a telephone interview from her home in Guelph, Ont. on Wednesday.

The 65-year-old said her doctor told her that she had a probable case of COVID-19 in April 2020, but she was never officially diagnosed because she didn’t qualify for a test at the time. Since then, she has spent months dealing with a wide range of symptoms.

“It turned into like a flu on steroids,” she recalled. “Chills, sweats, body aches, headache, sore throat, fatigue, what we call brain fog, and intense sinus pain.”

At the end of March, however, McCartney finally felt some relief after she received her first dose of the Pfizer-BioNTech vaccine.

While she said her cognitive problems remain unchanged, her appetite has increased, her fatigue has lessened, and her physical pain has been substantially reduced.

“It was very quick, which really, totally surprised me. I wasn’t expecting that at all. My body pain went from like a 12 out of 10 every day… it’s now about a four out of 10,” she said.

And McCartney’s experience is hardly unique.

Susie Goulding, the founder of one of Canada’s most popular private long-hauler support groups on Facebook, said she has seen a few posts by members with similar stories to McCartney’s following their vaccination.

In the U.S., the well-known long-haulers’ support group Survivor Corps, which has more than 163,000 members on Facebook, is filled with anecdotes about the vaccine and improved symptoms.

“I’ve had almost a complete reversal of my many long haul symptoms after receiving the Moderna vaccine,” one woman wrote on April 1. “I am 12 days post vaccination and I feel so much better.”

Another woman shared that her sense of smell had returned four-and-a-half months after she first contracted COVID-19. She said that occurred after she received her second shot of the Pfizer-BioNTech vaccine.

“All covid symptoms GONE. A miracle for so many of us longhaulers,” she wrote.

Survivor Corps even conducted an informal survey of its members at the end of February to gauge how their members were feeling after their jabs.

According to the poll, which had 654 votes by April 14, 252 respondents said their symptoms had improved following vaccination, while 389 said they had remained the same, and another 87 reported they had worsened.

In a small pre-print study out of the U.K. this month, which has not yet been peer reviewed, British researchers found that people with long-term symptoms who were vaccinated were more likely to see an improvement in their symptoms or no change at all than those who weren’t vaccinated.

The study followed a small sample of 66 patients who had been hospitalized for COVID-19 and experienced “long COVID,” as it’s often called. Of those patients, 44 had been vaccinated and 22 had not.

It’s also important to note that the 44 vaccinated individuals were older and had more underlying health conditions than the unvaccinated patients, which is why they received the shot earlier.

David Arnold, the study’s first author and a researcher at Bristol University, said they conducted the study because they had been receiving a lot of comments from patients who were concerned the vaccine might make their long COVID symptoms worse.

“It seems to be in some people, actually, it seemed to improve things a little bit, which was a bit of a surprise,” he told CTVNews.ca during a telephone interview from Bristol, U.K. on Wednesday.

Arnold acknowledged they only had a very small sample size for the study so any interpretation of its findings should be cautious.

However, based on anecdotal evidence and the findings of this small study, Arnold said it’s clear that further research is needed.

“It’s interesting because it almost raises more questions than it answers, this study, because it’s getting to the heart of the fact that we don’t really know what’s causing long COVID in a lot of people,” he said.

HOW COULD THE VACCINE HELP LONG-TERM SYMPTOMS?

While the scientific data on the effect of COVID-19 vaccines on long-term symptoms is still in its early stages, researchers have already put forth a few possible explanations.

Akiko Iwasaki is an immunologist at Yale University who is currently working with other scientists to launch a large collaborative study that will collect blood and saliva samples from long-haulers, before and after vaccination, to compare their immune responses and changes in symptoms.

In a blog post in March, Iwasaki proposed three mechanisms that might be causing long COVID in the first place:

Iwasaki said there are many studies that provide support for all three mechanisms and that she suspects long-haulers have varying degrees of all three.

In a Yale University press release on Monday, Iwasaki said it’s possible the vaccine is “helping the immune system fight off residual virus lingering in their bodies and clearing these remnants away.”

It’s also possible the vaccine is stopping a harmful immune response or serving to reset the immune system, according to Iwasaki.

Dr. Angela Cheung, a senior scientist at the University Health Network in Toronto, is also researching long-haulers as the co-lead investigator for the Canadian COVID-19 Prospective Cohort Study (CANCOV), which will examine the early to one-year outcomes of 2,000 patients and their family caregivers.

“There’s really not enough data to answer that question of whether vaccinations work or not for long-haul symptoms,” she told CTVNews.ca during a telephone interview on Sunday. “It’s intriguing that there’s some potential early data.”

Cheung said that’s why her group is proposing a study to try different treatments for long COVID symptoms, which will hopefully include vaccines.

Ultimately, the bottom line, according to all of the above researchers, is that long-haulers should be encouraged to get vaccinated when they have the opportunity to do so.

“I think we can say that there’s certainly no signal they [vaccines] make things worse, which is really important, because it’s important that this group of people get vaccinated because they’re clearly vulnerable to COVID,” Arnold said.